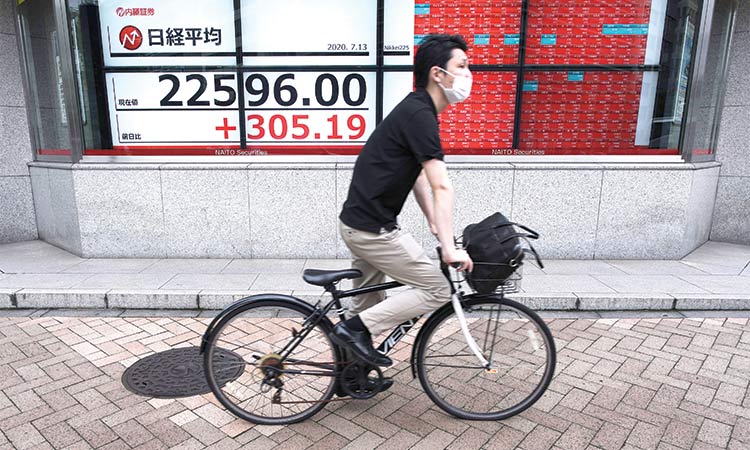 A man rides a bicycle near an electronic stock board showing Japan’s Nikkei 225 index at a securities firm in Tokyo on Monday. Associated Press

A spike in COVID-19 infections across the globe kept a lid on gains, they said.

“The mood remains upbeat as the new week kicks off and US earning season moves into focus,” said City Index analyst Fiona Cincotta.

Key European stock markets were well over one per cent up by the close.

Earlier, Asia had led the way with solid gains across the region.

Oil prices fell on festering fears over demand-destroying coronavirus, and before this week’s expanded OPEC+ technical gathering of key crude producers who are expected to curb production cuts.

Investors welcomed comments on Friday from the head of German biotech firm BioNTech who said a vaccine candidate would be ready for regulatory review by the end of the year, while Gilead Sciences said its drug remdesivir had been relatively effective in clinical trials.

“There was a sense of optimism circulating on the back of hopes for a treatment for coronavirus,” said CMC Markets analyst David Madden.

Trillions of dollars in government support is keeping global equities well supported, but confidence is being strangled by the spread of the disease, with an explosion of cases forcing some countries to reimpose containment measures just weeks after easing lockdowns.

In Paris, Ubisoft shares dived after the gaming company revealed over the weekend that its second most powerful executive was among the senior staff to have left the firm as it pursues an internal investigation into sexual harassment allegations.

British stocks closed higher on Monday, recovering from the prior week’s losses as the focus turned to the upcoming second-quarter earnings season, although a continued rise in coronavirus cases kept sentiment subdued.

The blue-chip FTSE 100 closed 1.3% higher, pushed up by heavyweight mining stocks Rio Tinto and BHP Group . The two will be the first among their peers to release quarterly production data later in the month.

A recent rise in metal prices, particularly copper, has also improved the prospects of major miners.

The mid-cap FTSE 250 added 1.2% for the day. While second-quarter earnings are broadly expected to paint a dismal picture, markets will be looking to corporate guidance on how a post-COVID-19 recovery will pan out.

The FTSE 100 has rebounded about 26% from its March lows on a raft of monetary and fiscal stimulus, but has struggled so far in July to extend its gains, owing to pressure from rising COVID-19 cases across the globe.

Rating agency Moody’s warned on Friday that Britain will suffer the sharpest peak-to-trough economic slump of any major economy this year, while the health crisis will push up national debt as a share of GDP by nearly a quarter.

Riskier Spanish, Italian and Portuguese government bond yields also ticked up, but to a lesser extent. Italy’s 10-year yield touched its highest in over a week in early trading, but had returned to near Friday’s levels at 1.31%. Rabobank’s Graham-Taylor expects the EU’s recovery fund to be the main driver of market moves this week.

Market focus is also on the European Central Bank, which meets on Thursday, when no change is expected to monetary policy.

The ECB bought a net 25.067 billion euros ($22.08 billion) of assets last week as part of its quantitative easing programme, below the 25.874 billion euros it purchased a week earlier, it said on Monday.

The slowdown has been a potential cause of concern, analysts said, as some ECB bond members suggested the emergency bond purchase “envelope” might not be used in full, while others saw the slowdown as an early start to the sluggish summer period.

Gold prices rose above the key $1,800 level on Monday, underpinned by surging coronavirus cases globally and concerns that they may slow down recovering economies.

“Of course, there’s going to be normal downside corrections, but the trend remains up.”

The dollar index dropped 0.4% after a third consecutive weekly decline.The yellow metal has risen over 19% so far this year due to massive stimulus from governments and central banks across the globe to revive coronavirus-hit economies.