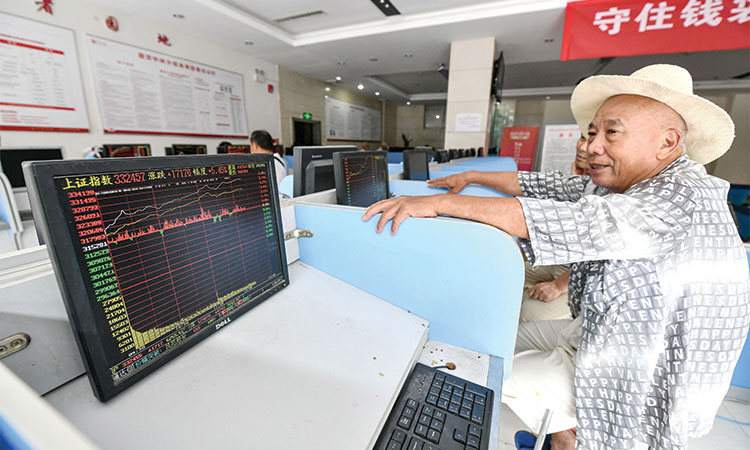 The easing of lockdowns is providing hope the global economy will bounce back from an expected recession this year, with England’s pubs reopening at the weekend and tourist attractions around Europe now either open or planning to.

Better-than-forecast data on US jobs creation and factory activity have also provided a boost to confidence, as have hopes for a vaccine, which observers say is key to kickstarting any recovery.

The US services sector grew in June after the coronavirus pandemic caused its steepest-ever contraction the month prior, an industry survey said on Monday.

On Wall Street, the Dow Jones was more than 350 points higher in the late New York morning, while key European markets posted gains of 1.5 per cent or more at the close.

Data showing a record rebound in euro zone retail sales in May following a pandemic-driven historic slump in the previous two months, and an unexpected growth in the U.S. services sector last month further bolstered sentiment.

Investors on both sides of the Atlantic took their cue from equities in China, “with the world’s second largest economy seeing a huge uptick” which saw its main stocks index closing up nearly six per cent, noted Joshua Mahony, senior market analyst at IG trading group.

During Asian hours, Chinese stocks jumped more than 5% on ample liquidity, cheap funding and expectations of a faster and a better bounce-back in business activity than other major countries that are still battling the coronavirus crisis.

Traders have piled back into stocks in recent months -- with the help of vast government and central bank support -- and analysts have suggested the gains are also being helped by a fear of missing out on the rally.

“The global economic data and positive coverage on potential COVID-19 vaccines and treatments represent a... whirligig of positive news that is overwhelming gnarly headline flows around the daily virus case counts in the US,” said AxiCorp’s Stephen Innes.

Shanghai soared to its highest level in more than two years, while Hong Kong finished at levels not seen since early March.

But there remains trepidation on trading floors as new infections spike around the world.

Some US states are reporting record daily increases, with a number of officials considering reimposing lockdown measures, while Brazil and India are also seeing worryingly large rises.

And Australia said it would effectively seal off the state of Victoria from the rest of the country as authorities struggle to control a surge in cases.

“For now the positive data surprises and huge fiscal and monetary stimulus are the overwhelming forces,” National Australia Bank’s Rodrigo Catril said in a note.

“But the increase in COVID-19 infections, not just in the US, means that they need to be closely monitored -- the introduction of more severe containment measures has the potential to derail the positive vibes in markets.”

The pound fell against the euro, as the common currency rose on Monday, and held steady against the US dollar, as traders looked ahead to this month’s Brexit negotiations and more government support measures expected later this week.

By the end of July, traders anticipate more clarity on whether Britain will agree a trade deal with the European Union.

Britain left the EU in January, but has full access to the bloc under a transition period that runs until the end of December.

Britain and the EU need to make progress on EU financial market access given that the coronavirus crisis will make it even harder to cope with potential disruption if there is no agreement, banking lobby AFME said on Monday.

Some attention will be given to the construction purchasing managers’ index for June, expected to rise to 47 from 28.9 the month before, economists polled by Reuters found, although preliminary versions of the other British PMIs have been already released.

oil prices were mixed on Monday, with Brent crude edging higher on tighter supplies and positive economic data, while US benchmark WTI futures dropped on concern that a spike in coronavirus cases could curb fuel demand in the United States.

Gold on Monday edged toward a near 8-year high hit last week as a spike in coronavirus cases kept safety demand elevated, although robust equities and positive US services sector data limited the metal’s advance.