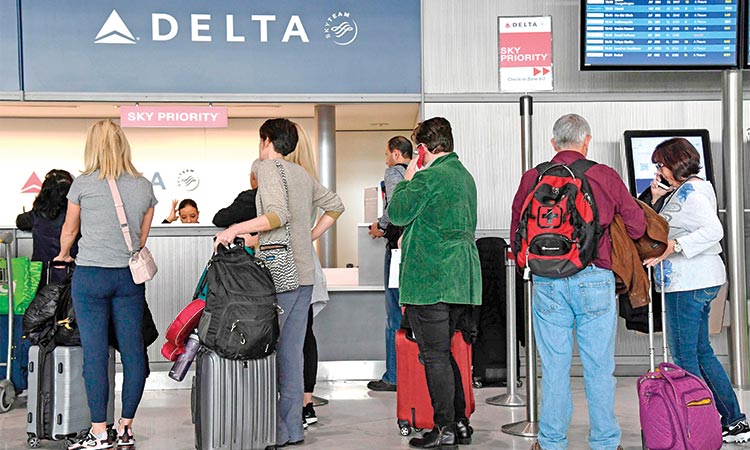 Passengers at a Delta Air Lines’ counter at an airport in Paris. File/Agence France-Presse

Delta Air Lines had a strategy for years: expand worldwide by buying stakes in airlines and partner with them while avoiding the cost and red tape of full acquisitions.

That strategy, more aggressive than those of any rival, could now backfire. Aeromexico this week became the third Delta partner to file for bankruptcy due to the coronavirus pandemic, following LATAM Airlines Group and Virgin Australia.

In Latin America, Delta spent nearly $3 billion to build up stakes in Aeromexico and LATAM over the past three years.

The investments had promise before the pandemic, but their valuations have since been crushed and could be leveled entirely if equity holders are wiped out, as is common in Chapter 11 reorganisations.

Even if that does not happen, Delta faces diluted equity stakes if other partners come in through the two airlines’ reorganizations, as well as a probable downsizing. Both factors could make them less promising partners to connect with its flights.

In the worst case scenario, it would be at the back of the queue if either company liquidates, getting pennies on the dollar. But over the longer term, partnerships could be a way for US airlines to reboot international travel, which is expected to recover more slowly than domestic travel.

“A restructured set of partners could end up being the way that the US majors reconstruct their global networks,” said Vik Krishnan, who leads McKinsey’s Travel practice in North America. “In other words, they become more reliant on these partnerships rather than less.”

Even if Delta did want to trim back its global partnerships, the bankruptcies mean that any stake sale would make little sense, at a time when Aeromexico and LATAM are valued at record lows.

One consultant said there was a chance Delta could chip in some funds to help Aeromexico survive, given the importance of the market across the southern U.S. border.

“Delta has spent time, money and effort on Aeromexico. If they had to rescue them, I think they would,” said Carlos Ozores, an aviation consultant at ICF. It might not be as inclined to rescue LATAM, Ozores said, partly because the relationship is much newer.

Delta Chief Executive Ed Bastian has said the company stands by its partners. Following Aeromexico’s bankruptcy, Bastian forecast it would emerge from Chapter 11 “well positioned to succeed and will be a stronger partner for Delta.”

But the carrier, which has received $5.4 billion in US government aid to pay employees through September, has shown no willingness to put cash into foreign partners’ restructurings.

The Financial Times reported Delta would support Virgin Atlantic, in which it holds a 49% stake, with deferred payments on branding fees and shared IT platforms.

Its approach contrasts with that of state-controlled Qatar Airways, which owns a 10% in LATAM and has joined other shareholders to commit $900 million in cash to the Chilean carrier.

Delta spokesman Morgan Durrant said the bankruptcies do not affect its financial position or the state of its balance sheet.

For years Delta built a foothold in new markets through joint ventures, which allow airlines to coordinate fares and schedules. By buying stakes, it also got to appoint board members to have a say in its partners’ strategies. But with border restrictions and international travel at a near standstill, the partnerships’ economic and strategic value has been vastly curtailed, analysts said. Three of Latin America’s largest airlines - LATAM, Aeromexico and Avianca Holdings - are now in Chapter 11, as governments avoided potential bailout packages. Analysts expect a changed post-crisis landscape in the region with fewer competitors and higher ticket prices.

Delta paid $2 billion for a 20% in LATAM just 3-1/2 months before global travel imploded in March. With that money, it could now buy LATAM more than twice over.

It booked the value of its 49% stake in Aeromexico at $833 million in 2019, but as of Wednesday the investment was only worth about $85 million, according to the market cap value from Refinitiv, a data provider.

In its bankruptcy papers, Aeromexico called its relationship with Delta “extremely important in strengthening its position in the Mexico-United States travel market,” the Mexican carrier’s largest and most critical international market.

Delta also owns stakes in Air France KLM and Korean Air, and has a joint venture partnership with Virgin Australia, which is set to be bought out of administration by US private equity group Bain Capital, and joint venture agreement with Canada’s WestJet pending US regulatory approval.