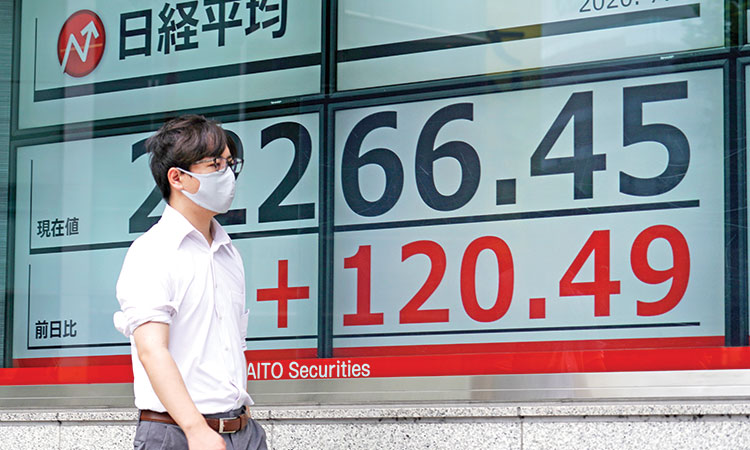 A man walks past an electronic stock board showing Japan’s Nikkei 225 index at a securities firm in Tokyo on Friday. Associated Press

Around 11 million people have been infected by the virus globally, but as the number of daily reported cases has fallen across much of Europe governments have loosened restrictions on people’s movement.

To support ravaged economies the European Central Bank expanded its pandemic-related bond purchases to a total of 1.35 trillion euros last month while governments have waded in with unprecedented levels of fiscal stimulus.

That may be paying dividends as IHS Markit’s final Composite Purchasing Managers’ Index (PMI), seen as a good gauge of economic health, bounced to 48.5 in June from May’s 31.9, better than a 47.5 preliminary reading and close to the 50-mark separating growth from contraction.

“The sharp increases in the eurozone PMIs in June suggest that activity is bouncing back quite quickly, but remains far lower than before the crisis,” said Jack Allen-Reynolds at Capital Economics.

A June Reuters poll predicted the economy contracted an unprecedented 12.5% last quarter but would grow 7.9% this quarter.

Activity in the bloc’s dominant service industry also almost returned to growth last month. Its PMI soared to 48.3 from 30.5, comfortably ahead of the 47.3 flash reading.

However, demand still fell despite vendors cutting prices, and firms reduced headcount for a fourth straight month. The services employment index rose to 43.9 from 37.9, still one of the lowest readings in the survey’s 22-year history.

Unemployment in the bloc edged up in May, official data showed on Thursday.

“The employment index has not rebounded anywhere near as sharply as the output PMI, implying that the increase in activity in recent months is a long way from strong enough to provoke an increase in hiring,” Allen-Reynolds said.

“Instead, the PMI still points to steep declines in employment.” That weak demand is holding up a more pronounced recovery in Germany’s services sector, which is slowly coming back to life after Europe’s largest economy lifted restrictions, earlier data showed.

French service sector activity returned to growth as its lockdown was further eased, boosting overall business activity, while in Britain -- outside the currency union -- an historic slump levelled off as some of the economy reopened.

Optimism about the year ahead returned. The eurozone composite future output index climbed back into positive territory, recording 56.9 versus May’s 46.8.

Separately, world stock markets turned lower in Europe on Friday after gains in Asia, with trading somewhat subdued by a long holiday weekend in the US With Wall Street due to remain closed in observance of Independence Day, Germany’s DAX edged 0.5% lower to 12,548. The CAC 40 in Paris dropped 0.9% to 5,006, while Britain’s FTSE was down 1.2% at 6,167.

Markets had risen earlier in Asia as investors there got their first opportunity to react to the stronger-than-expected US jobs figures released on Thursday.

The US government said employers added 4.8 million jobs to their payrolls in June for the second-straight month of growth. The unemployment rate remains very high at 11.1%, but last month’s improvement was much better than economists expected.

Overnight, the S&P 500 rose 0.5%, its fourth-straight gain, ending the holiday-shortened week with a gain of 4%.

A recent surge in new confirmed cases of the coronavirus in Florida, Texas and several other states has led some governors to halt the reopening of their economies or to order some businesses, such as restaurants and bars, to re-close. That has dimmed some of the optimism for a relatively quick economic turnaround, especially for travel-related sectors like cruise lines.

In other trading, benchmark US crude oil for August delivery slipped 51 cents to $40.14 per barrel in electronic trading on the New York Mercantile Exchange. It rose 83 cents Thursday to settle at $40.65 a barrel. Brent crude oil for September delivery dropped 53 cents to $42.61 a barrel. 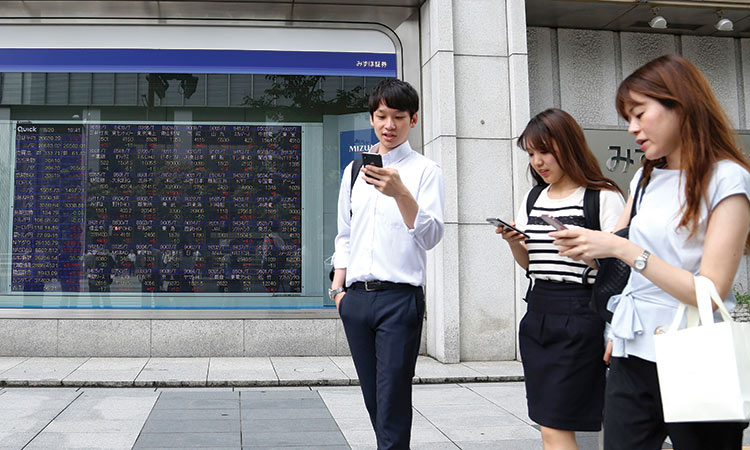 Japan has approved shipments of a high-tech material to South Korean (SK) market for the second time since imposing export curbs last month, two sources said, ahead of talks by government officials this week to resolve a dispute stemming