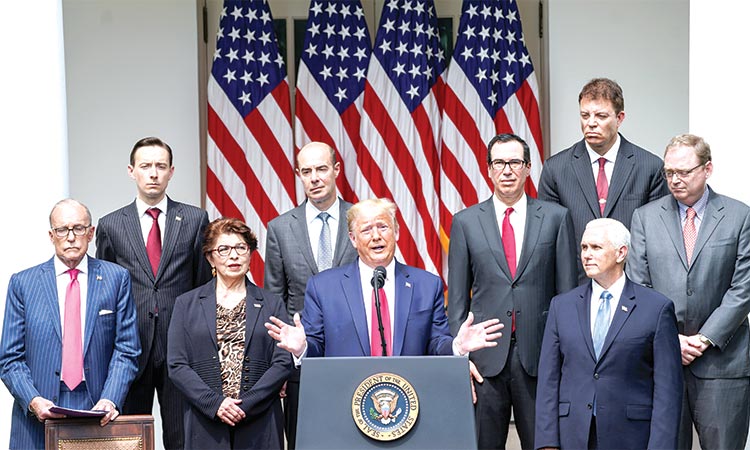 Donald Trump talks about a US jobs report during a news conference in the Rose Garden at the White House in Washington on Friday. Reuters

The Labor Department’s closely watched employment report on Friday also showed the jobless rate falling to 13.3% last month from 14.7% in April, a post World War Two high. It followed on the heels of surveys showing consumer confidence, manufacturing and services industries stabilizing. Economic conditions have significantly improved as businesses reopened after shuttering in mid-March to slow the spread of COVID-19.

Nonfarm payrolls rose by 2.5 million jobs last month after a record plunge of 20.7 million in April. Economists polled by Reuters had forecast payrolls falling by 8 million jobs in May and the unemployment rate jumping to 19.8%.

Despite last month’s surprise increase, payrolls are nearly 20 million below their pre-COVID-19 level. The unemployment rate has risen 9.8 percentage points and the number of unemployed is up 15.2 million since February.

Without the misclassification, the May unemployment rate would have been about 16%.

Still, May’s surprise turn in the labour market could offer a respite for President Donald Trump, who is seeking re-election. The Trump administration has been severely criticized for its handling of the pandemic.

This week, Trump came under fire for his response to demonstrators protesting the death in police custody of George Floyd, a black man. Though many economists expect the unemployment rate to peak in May, it is forecast to be above 10% when Americans head to the polls on Nov. 3.

Employment in May was boosted by restaurants and bars, which added 1.4 million jobs after losing 5.4 million jobs in April and 633,000 jobs in March. But payrolls continued to decline in the accommodation industry in May, with an additional 148,000 jobs lost.

Hiring in the construction industry increased by 464,000 jobs last month, recouping about half of April’s decline. There were also gains in employment in education and health services, retail trade, manufacturing, professional and business services, financial activities and wholesale trade.

But government payrolls dropped by 585,000 in May, with the declines in state and local governments, whose budgets have been crushed in the fight against COVID-19. There were further job losses in the information, mining, transportation and warehousing industries.

President Donald Trump on Friday celebrated a stunning US employment report that showed the country gained more than 2.5 million jobs last month during the thick of the coronavirus pandemic, and predicted the battered economy will have recovered by 2021.

“We’re bringing our jobs back,” Trump said at a news conference at the White House.

“I think we’re actually going to be back higher next year,” he said.

Trump, who had counted on a strong economy to bolster his chances of re-election in November, said the recovery could be hampered by higher taxes and implementation of a Green New Deal climate change plan if Democrats win the White House.

Meanwhile, US stock indexes jumped on Friday, with the Nasdaq Composite less than 1% away from a record high, on hopes of a faster economic rebound from a coronavirus-led slump after data showed surprise job additions in May.

The S&P 500 banks sub-index, considered interest-rate sensitive, jumped 5.8% as US Treasury yields rose after the data.

Boeing Co gained 14.4%, the biggest boost to the Dow Jones index, on hopes of a pickup in air travel a day after American Airlines Group Inc and United Airlines said they would boost their US flight schedule next month.

All major S&P 500 sector indexes rose, with the energy sub-index’s leading gains with a jump of 7.2%, while the defensive consumer staples index added the smallest gains.

Wall Street has rebounded sharply from a coronavirus-driven crash in March as investors bet on a revival in business activity following the easing of a nationwide lockdown.

Fears of more disruptions from social unrest have also eased in the past two days, with the largely peaceful protests against the killing of a black man in police custody waning into Friday morning and emergency curfews in many cities being lifted.