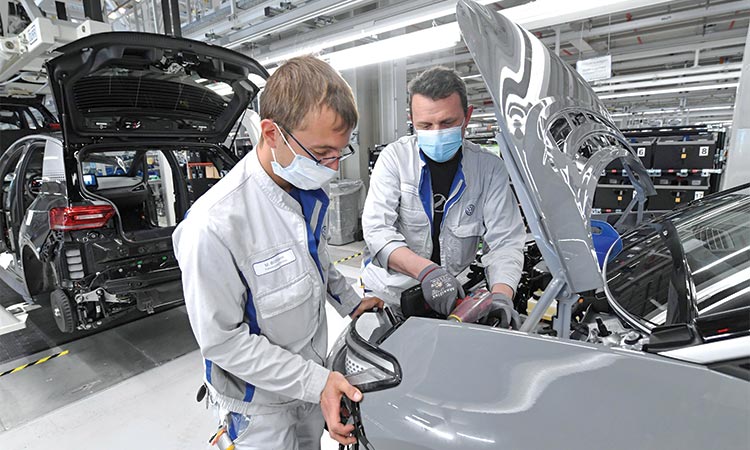 German fuel stations will be required to provide electric vehicle charging, transforming opportunities to refuel zero-emission cars that consumers have shunned in part because of concerns over their range.

Electric cars, which made up only 1.8% of new passenger car registrations in Germany last year, will be boosted by a 6,000 euro incentive for electric cars that cost below 40,000 euros.

This brings consumer incentives for electric cars in Germany to 9,000 euros once a 3,000 euro manufacturer stipend is included.

According to Germany’s Federal Office for Economy and Export, BAFA, the cars eligible for the full subsidy include the BMW i3, Hyundai’s Ioniq and Kona models, Kia’s E-Nero, Peugeot’s electric 208, Renault’s Zoe and Tesla’s Model 3.

Tesla and VW, which is readying a mass market push for its ID3 model, will be well-placed to flood the market with the help of the stimulus measures, analysts said. Tesla’s Model S and the Mercedes EQC are eligible for subsidies, but not for the full amount.

German new car sales fell 49.5% in May following a 61.1% slump in April, leaving thousands of petrol and diesel engine cars unsold and analysts questioning whether demand will recover from a coronavirus-induced slump.

“The lowering of VAT will hardly provide an impetus,” said Peter Fuss, a partner at EY, adding electric cars were still too niche to lift the overall market.

Germany will overhaul its motor vehicle tax. From January 2021, cars with emissions higher than 95 grams of CO2 per kilometre will face increased levies. This benefits hybrid vehicles in the short term, but a staggered CO2 tax treats them as only an interim way to cut pollution.

Berlin’s plans are a rebuff to the German auto industry’s lobbying efforts and are more radical than the French programme, which includes a scrappage scheme that boosts sales of petrol and diesel vehicles.

“The VDA regrets that the stimulus plan only partially included the auto industry’s proposals for a broad and immediate economic impulse,” German auto industry association VDA said on Thursday.

Environment campaigners welcomed the investment in electric transport that chimes with European Union ambitions to cut net emissions to zero by 2050.

“This is exactly what’s needed to support jobs and help us emerge stronger and greener from the COVID crisis,” Stef Cornelis, Germany director for campaign group Transport & Environment, said.

Germany said it will oblige all petrol stations to offer electric car charging to help remove refuelling concerns and boost consumer demand for the vehicles as part of its economic recovery plan.

“It’s a very clear commitment to battery-powered vehicles and establishes electric mobility as a technology of the future,” energy storage specialist The Mobility House, whose investors include Daimler and the Renault-Nissan-Mitsubishi alliance, said.

“Internationally this puts Germany in the leading group of battery electric vehicle support.”

As part of the government stimulus, 2.5 billion euros will be spent on battery cell production and charging infrastructure, a field where oil majors, utilities and carmakers, including Shell, Engie and Tesla, are vying for dominance.

Customer demand for electric cars has been constrained by concerns about the limited operating range of vehicles. In Germany, electric cars made up only 1.8% of new passenger car registrations last year, with diesel and petrol cars accounting for 32% and 59.2% respectively.