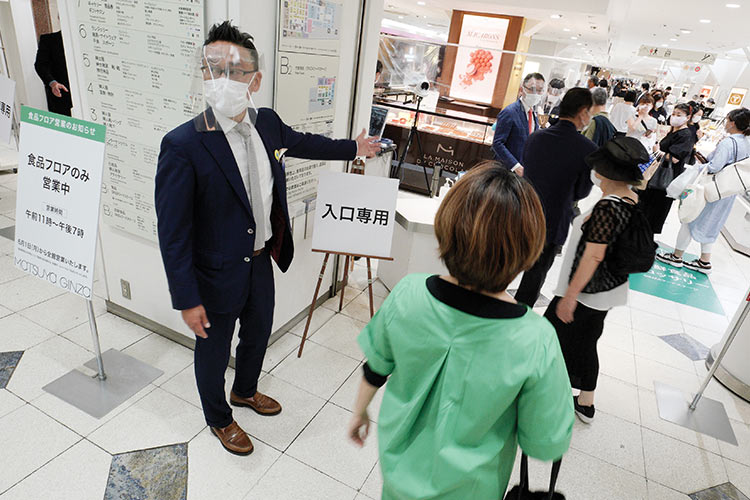 The airline has been in talks with Berlin for weeks over aid to help it to cope with what is expected to be a protracted travel slump, but the carrier has been wrangling over how much control to yield in return for support.

The German Finance and Economy Ministries on Monday said Lufthansa was an operationally healthy company before the coronavirus outbreak, was profitable and had good prospects for the future but had got into trouble because of the pandemic.

Lufthansa said that conditions of the deal include the waiver of future dividend payments and limits on management pay. The government will also fill two seats on the supervisory board, one of which is to become a member of the audit committee.

The plan includes Germany taking a 20% stake in Lufthansa, which it plans to sell by the end of 2023. Germany will buy the new shares at the nominal value of 2.56 euros apiece for a total of about 300 million euros.

Finance Minister Olaf Scholz said the rescue package was a “very, very good solution” that takes into account the needs of both the company and taxpayers.

“The support that we’re preparing here is for a limited period,” he said.

“When the company is fit again, the state will sell its stake and hopefully... with a small profit that puts us into a position to finance the many, many requirements which we have to meet now, not only at this company.” The government will also inject 5.7 billion euros in non-voting capital, dubbed silent participation, into the company. Part of this could be converted into an additional 5% equity stake, either if coupon payments are missed or to protect the company against a takeover.

Separately, Lufthansa will receive a 3 billion euro loan from state-backed bank KfW and private banks with a term of three years.

The bailout deal is still pending approval by shareholders as well as the European Commission.

The company and the competition watchdog are still discussing which slots at which airports Lufthansa will have to waive as a remedy to ensure the bailout does not hamper competition, a person close to the matter said.

“Scrutiny is extremely thorough as it is the first large equity-based bailout in the pandemic,” the source said.

According to business daily Handelsblatt, German chancellor Angela Merkel said that Germany would fight for remedies not being too stringent. Chancellor Angela Merkel told senior members of her party that the German government would not allow the European Commission to deprive Lufthansa of valuable take-off and landing slots at Frankfurt and Munich airports, Handelsblatt reported.

“We won’t allow that to happen,” Merkel said according to participants in the meeting, the business daily reported. Merkel was also quoted as saying there would be a “tough fight”.

Lufthansa and the competition watchdog are discussing which slots at which airports Lufthansa will have to waive as a remedy to ensure competition is not hampered by the bailout, a person familiar with the matter told Reuters. (Reporting by Michelle Martin Editing by Arno Schuetze) Lufthansa faces long virus recovery as state rescue nears Frankfurt am Main, May 25, 2020 (AFP) - Partial nationalisation appeared within reach Monday for German airline Lufthansa, facing the prospect of lingering fallout from the coronavirus and feared to be at risk of foreign takeover.

Sources close to talks between Berlin and Lufthansa bosses told AFP the two sides had an “in-principle” deal along the lines confirmed by the company last week.

That rescue plan, totalling nine billion euros ($9.8 billion), would see Berlin would take a 20-percent stake in the airline group, as well as a convertible bond worth five per cent plus one share − allowing it to claim a blocking minority shareholding to shut out hostile takeover attempts.

The package would also include a three-billion-euro state loan to the airline as well as two government-appointed seats on the supervisory board. And conditions will likely include “the waiver of future dividend payments and restrictions on management remuneration”, Lufthansa said Thursday. The group had already suspended its dividend payout for 2019, saying that it needed cash on hand to weather the coronavirus storm.

Approvals from Lufthansa’s supervisory board and the government’s economic stabilisation fund (WSF) are widely seen as a formality.

That leaves sign-offs from shareholders − who must agree to any plan that would dilute their investments − and competition regulator the European Commission as the two final hurdles for the rescue.