Federal Reserve warns of a possible sustained recession from pandemic 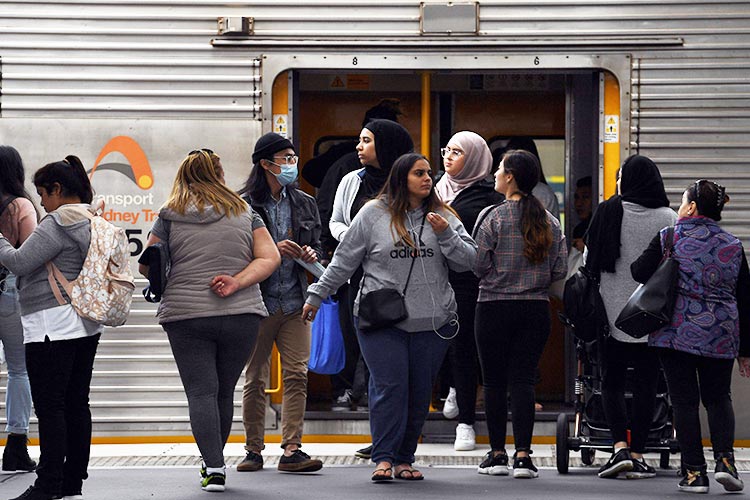 Commuters disembark from a train in the central business district of Sydney on Wednesday. AFP

Federal Reserve Chair Jerome Powell warned on Wednesday of the threat of a prolonged recession resulting from the viral outbreak and urged Congress and the White House to act further to prevent long-lasting economic damage.

The Fed and Congress have taken far-reaching steps to try to counter what is likely to be a severe downturn resulting from the widespread shutdown of the US economy. But Powell cautioned that widespread bankruptcies among small businesses and extended unemployment for many people remain a serious risk.

“We ought to do what we can to avoid these outcomes,” Powell said.

Additional rescue aid from government spending or tax policies, though costly, would be “worth it if it helps avoid long-term economic damage and leaves us with a stronger recovery,” he said.

Powell spoke a day after House Speaker Nancy Pelosi, a California Democrat, proposed a $3 trillion aid package that would direct money to small businesses, state and local governments and other beleaguered institutions. This money would come on top of roughly $3 trillion in earlier financial assistance that the government has provided. The Fed itself has also intervened by slashing interest rates to near zero and creating numerous emergency lending programs.

Yet Trump administration officials have said they want to see how previous aid packages affect the economy. And Republican leaders in Congress have expressed skepticism about allowing significant more spending right now.

“Deeper and longer recessions can leave behind lasting damage to the productive capacity of the economy,” the chairman warned in his prepared remarks before holding an online discussion with the Peterson Institute for International Economics. “Avoidable household and business insolvencies can weigh on growth for years to come.”

He said the Fed would “continue to use our tools to their fullest” until the viral outbreak subsides, but he gave no hint of what the Fed’s next steps might be.

Powell repeated his previous warnings that the Fed can lend money to solvent companies to help carry them through the crisis. But a longer downturn could threaten to bankrupt previously healthy companies without more help from the government.

Powell’s downbeat view contrasted with a speech Monday by Charles Evans, president of the Federal Reserve Bank of Chicago. Evans sketched a more upbeat outlook and suggested that “it’s reasonable to assume a legitimate return to growth in the second half” of this year and into 2021.

In his remarks Wednesday, the Fed chairman underscored some of the harsh impacts of the recession. Among those working in February, nearly 40% of households earning less than $40,000 a year lost a job in March, Powell said.

Meanwhile, Norway’s $1 trillion wealth fund is excluding some of the world’s biggest commodities firms from its portfolio, including Glencore and Anglo American , because of their use and production of coal.

Underlining the growing role of climate considerations for long-term investors, the fund is also excluding German utility RWE, South African petrochemicals firm Sasol and Dutch company AGL Energy over their use of coal.

Norway’s parliament agreed in June 2019 to toughen existing limits on coal investments by the world’s largest fund by excluding firms that mined more than 20 million tonnes of coal a year or generated more than 10 gigawatts of power from coal.

At the end of 2019, the fund held stocks worth $1.6 billion such companies, according to fund data.

Wednesday’s announcement, made in a statement issued by the fund, is the first to show the tougher rules being applied.

The fund, set up in 1996 to save Norway’s oil and gas revenues for future generations and which now holds about 1.5% of globally listed shares, sells holdings before announcing any exclusions to avoid excessive market moves.

The fund put another set of companies - BHP , Uniper, Enel and Vistra Energy - under observation for possible exclusion later if they did not address their use or production of coal.

“This is good news that the biggest producers of coal in absolute terms are finally out of the fund,” Else Hendel, acting environmental policy leader at green group WWF Norway, told Reuters.

The fund operates under ethical guidelines set by parliament and excludes companies from its portfolio that do not respect them. Its exclusions are often followed by other funds.

The fund also said it was excluding four Canadian oil firms for producing excessive greenhouse gas emissions, the first time it has used that reason to blacklist firms from its portfolio.

Canadian Natural Resources, Cenovus Energy , Suncor Energy and Imperial Oil were excluded for “acts or omissions that on an aggregate company level lead to unacceptable greenhouse gas emissions,” it said.

The fund said on Wednesday it had taken a long time to sell shares of several excluded firms due to the “market situation, including liquidity in individual shares”, following weeks of global financial market turmoil due to the coronavirus crisis.