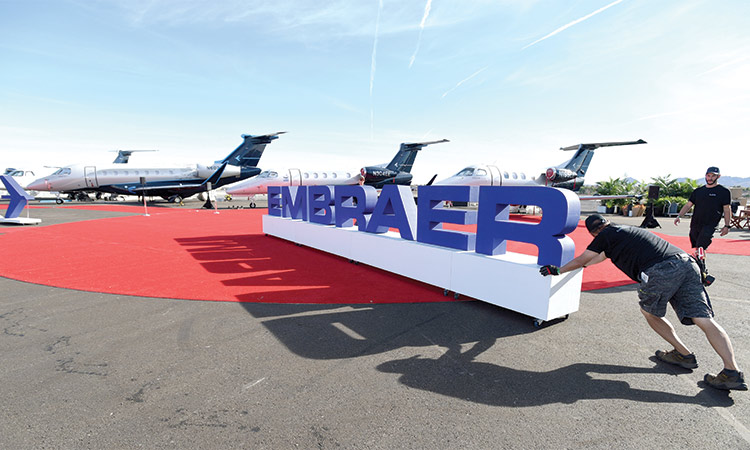 Workers set up the Embraer booth prior to the opening of the National Business Aviation Association exhibition in Las Vegas, Nevada. File/ Reuters

Boeing’s statement confirmed a Reuters story earlier on Saturday and followed a story on Friday in which Reuters reported that the deal was close to collapse as the two parties neared a crucial midnight deadline.

Boeing said in the statement that Embraer had failed to meet certain conditions for the deal to go through, although it did not specify which ones. The April 24 deadline for closing had been baked into the deal since early last year, but antitrust hiccups had forced the two companies to try to work out a new deadline.

In July 2018, Boeing agreed to buy 80% of Embraer’s commercial jet unit to challenge Airbus directly in the market for midsize planes of up to 150 seats.

At the time Embraer defended the sale aggressively, saying it was crucial for the very existence of the company into the future.

“Given the current economic reality of the global aviation market, it can be seen that the operation with Boeing is not just beneficial to Embraer, it is fundamental to the survival of the company,” lawyers for Embraer said last year in response to a legal challenge.

Embraer had also gone to great lengths to separate its commercial jet business to have it ready for Boeing’s takeover. At the beginning of the year, it paid the expenses for all its employees to take two weeks of paid leave in order to handle the carve-out.

Shares in Embraer fell 11% in line with a sell-off on the Brazil market after the justice minister resigned accusing President Jair Bolsonaro of interference.

Reuters reported last month that weak markets had raised urgent questions over the fate of the deal as aviation reels from the coronavirus crisis. A drop in Embraer shares and cash concerns at Boeing, driven by the impact of the epidemic on air travel, have undermined the deal’s economics.

One source familiar with the talks said Boeing remained committed to the deal and that it would be complex to reverse the carve-out of Embraer’s commercial arm, which makes the E2 series of regional jets competing with the Airbus A220.

Analysts have not ruled out a second attempt to complete the strategic tie-up if the deal collapses, with Embraer looking increasingly isolated after Airbus bought its main Canadian rival and Boeing seeking a broader and cheaper engineering base.

The agreement has a termination fee of $75 million, rising to $100 million if it is for anti-trust reasons, according to a copy of the merger agreement filed to US authorities.

Separately, two proxy advisers, Glass Lewis and Institutional Shareholder Services (ISS), have recommended that shareholders of Boeing Co vote against key board members of the planemaker to show objections to the company’s handling of the 737 Max crisis.

Glass Lewis recommended that at Boeing’s annual meeting on April 27 shareholders vote against Larry Kellner, the chairman of its board who previously oversaw the board’s audit committee.

“We believe the audit committee failed to mitigate the risk posed by management’s decisions and should be held accountable for its oversight,” Glass Lewis said in its recommendation.

In a separate recommendation, ISS advised shareholders to vote against four longtime board members - Arthur Collins, Edmund Giambastiani, Susan Schwab and Ronald Williams - who had served when the 737 MAX was being developed and rolled out.

ISS also said that a vote for newly named Boeing Chief Executive David Calhoun is “warranted, with caution” and that he will need to show that he can be an “effective leader of cultural change” at the company.

The recommendations, issued earlier in April and viewed by Reuters, were reported first by the Wall Street Journal on Friday.

Boeing did not immediately respond to a Reuters request for comment. In a Boeing statement cited by the Journal, a spokesman said the planemaker is continuing to learn from the 737 Max crashes and is taking actions to rebuild trust. Proxy advisers recommend how investors should vote in corporate elections and cast ballots on behalf of some asset managers. The role of proxy advisers has gained more attention in recent years as they have grown more influential.

Boeing, which has been struggling to get its 737 MAX aircraft flying again following two fatal crashes in 2018 and 2019, has been forced to cut production due to falling demand amid the coronavirus pandemic. And doubts are gathering over its $4.2 billion deal to buy the civil jetmaking arm of Brazil’s Embraer.

The Chicago-based company suspended 737 MAX deliveries in March 2019, when the Federal Aviation Administration grounded the aircraft following the deaths of 346 people in crashes of two 737 MAX planes operated by Lion Air and Ethiopian Airlines. 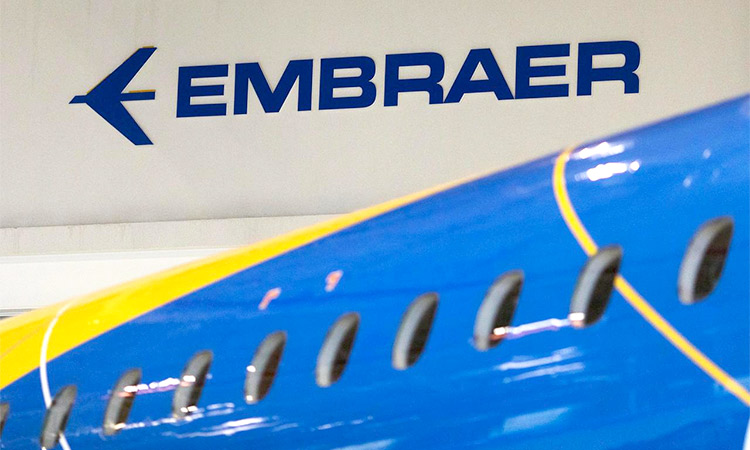