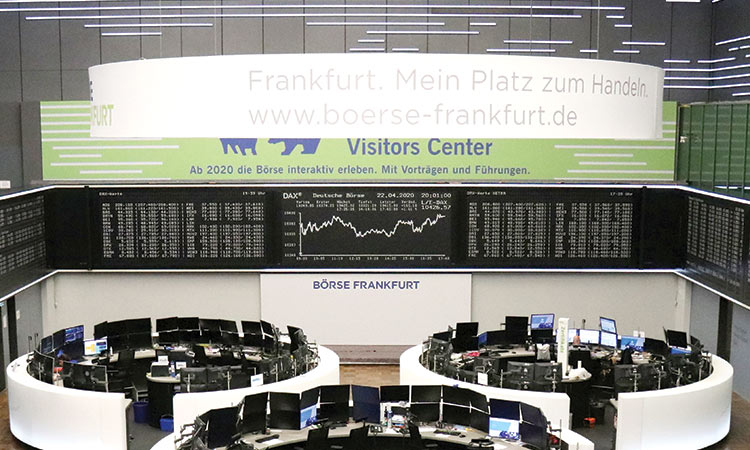 The German share price index DAX graph is pictured at the stock exchange in Frankfurt, Germany, on Thursday. Reuters

Another Thursday with a shocking number of workers losing their jobs, another gain for the stock market. US stocks pushed higher in morning trading, even after the government said 4.4 million people filed for unemployment benefits last week as layoffs sweep the economy.

The weekly report on jobless claims has become one of the best ways to measure in real time how severely the coronavirus outbreak is crunching the economy. Over the last five weeks, they’ve shown roughly 26 million people filed for jobless aid, or about one in six US workers. If this morning’s market gains hold, it will also be the fifth straight Thursday where the S&P 500 has climbed following a dismal jobless report.

Investors in the stock market are trying to set prices now for where the economy and corporate profits will be months into the future.

That’s why they sent the S&P 500 down by more than a third from its record in February until a month ago, before the recession really hit. Now, even though an appalling number of people are losing their jobs, some investors are looking further ahead to the prospect of parts of the economy reopening as infections level off in some areas. Analysts said last week’s slight dip in the jobless numbers may have offered another tiny bit of encouragement, down to 4.4 million from 5.2 million the prior week.

The Federal Reserve and Congress are also shoveling trillions of dollars of aid into the economy and markets to help prop them up through the downturn, which has helped the S&P 500 rally about 25% over the last month. The House is set to vote Thursday on another nearly $500 billion in small-business loans and aid for hospitals, a proposal the Senate approved earlier this week. Stocks have roughly halved their loss since their February record, and the S&P 500 is down less than 17% since then.

Many professional investors say the rally is overdone. There is still too much uncertainty about how long the recession will last, and if economies open up prematurely, they could trigger yet more waves of infections.

“The optimism of the equity market is honorable,” Kevin Giddis, chief fixed income strategist at Raymond James, wrote in a report. “The Treasury Secretary’s comments that the government will ‘do whatever it takes’ is helping to provide a state of calm that wouldn’t have been present otherwise, but we still have a long road ahead of us, and it won’t always be easy.” Stocks elsewhere around the world also climbed, while Treasury yields were steady.

That was despite the release of preliminary data on manufacturing and services activity in Europe and the United States that were even weaker than expected. A report on sales of new US homes Thursday also came in below economists’ expectations.

The yield on the 10-year Treasury edged down to 0.60% from 0.61% late Wednesday. Yields tend to fall when investors are downgrading their expectations for the economy and inflation ahead.

Crude oil prices jumped for a second straight day, pulling further away from zero after getting upended earlier this week. With airplanes, cars and factories idled around the world, demand has collapsed. Producers, meanwhile, can’t cut their production quickly enough, and all the extra oil around the world has sent prices plummeting.

US crude oil for delivery in June rose 30% to $17.87 per barrel. It has pulled back up from less than $12 Monday, though it remains well below the roughly $60 level it started the year at.

Oil prices have suffered one of their most tumultuous weeks.

The expiring WTI front-month contract on Monday fell into negative territory for the first time as traders paid buyers to take crude off their hands given a lack of storage space due to the current supply glut. Brent has lost roughly two thirds of its value this year.

Concerns about the collapse in demand because of travel restrictions to contain the coronavirus pandemic and a shortage of space to store oil still dominate, but analysts say they do not expect a repeat of Monday’s price shock.

The rally on Thursday followed an announcement from US President Donald Trump he had instructed the US Navy to fire on any Iranian ships that harass it in the Gulf, although he added later he was not changing the military’s rules of engagement. The head of Iran’s Revolutionary Guards said Tehran will destroy US warships if its security is threatened in the Gulf.