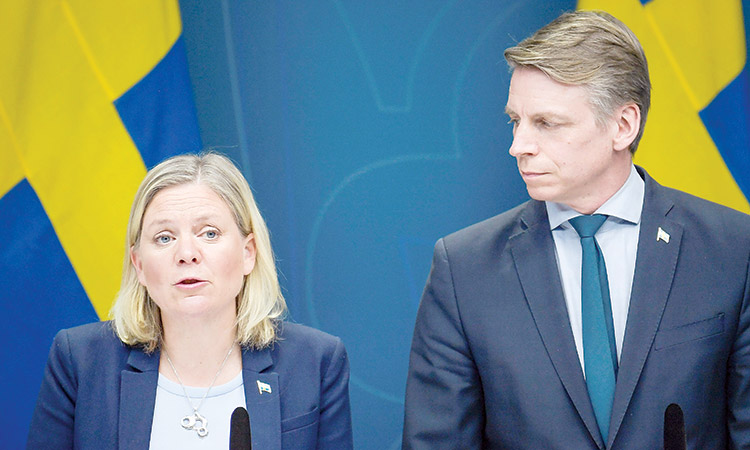 Magdalena Andersson and Per Bolund speak during a press conference in Stockholm. File/Agence France-Presse

Sweden will spend more than 100 billion Swedish crowns ($10 billion) in its spring budget to fight the outbreak of the novel coronavirus, which has shut down much of the economy, Finance Minister Magdalena Andersson said on Wednesday.

Many of Sweden’s businesses have closed as a result of the outbreak and thousands of workers have been sent home.

Sweden, in contrast to many other countries, has not opted for a total social lockdown, but Andersson still forecast the economy would contract around 4% this year.

The government had already announced a raft of measures - brought together in the budget - including subsidies for shorter working hours, tax rebates, loan guarantees and easier rules for claiming benefits, all to soften the blow from the virus outbreak.

“The measures we have presented are unprecedented in Swedish history,” Andersson told a news conference. “We have a very good starting position with the lowest government debt since 1977.”

The government also sketched out a more negative scenario in which the effects of the virus outbreak would be more long-lasting.

Earlier, Magdalena Andersson and Minister for Financial Markets and Housing Per Bolund spoke during a press conference in Stockholm, Sweden, on March 30. They described approved extra means for the unemployment benefit scheme during the crisis.

In that scenario, the economy would contract 10% this year with unemployment rising to 13.5% and the government’s budget deficit sliding to 9% of GDP. Public sector debt would rise to more than 50% of GDP from the current 35%.

The downturn this year is expected to be nearly as deep as during the global financial crisis of 2007-09. Sweden’s economy in 2009 shrank 4.2%, the biggest decline in more than 50 years.

In its most recent forecast, the International Monetary Fund said it expects the global economy to contract 3% this year.

In addition, the government has also promised local authorities around 22 billion crowns to meet extra healthcare and other costs. “The measures will give greater security, for those who have been hit by the crisis by limiting the spread of the infection, limit the consequences for companies and jobs and at the same time give economic security and the chance for a new start for those who become unemployed,” Andersson said in a statement. The loans and guarantees on offer are worth 550-600 billion crowns, the government has said.

The central bank has also poured money into the financial system, offering 500 billion crowns in loans to companies via banks and boosting its purchases of securities by 300 billion crowns.

Sweden’s government said on Tuesday it would increase the amount it would pay to companies to cover salaries of employees who had been put on reduced hours, as it fights to lessen the effects of the COVID-19 outbreak on the economy.

The government said in a statement it would temporarily cover up to 86% of wage and labour tax costs for workers who were partially laid off.

The government announced a more limited scheme at the start of April with employees able to work 40% of their hours and retain the bulk of their salary. Workers will now be able to go down to 20%.

“Then we would be in a very very serious and deep economic crisis and it would be reasonable to use more of the muscles we have thanks to our low state debt to stimulate the economy,” Finance Minister Magdalena Andersson told a news conference.

If the scheme were to be used by around 180,000 workers, the cost would be around 32.7 billion crowns, the government said.

So far, the government has received 24,000 applications for wage support at an estimated cost of 9 billion crowns.

Unemployment in Sweden could reach 10% in the coming months if the current wave of lay-offs due to the outbreak of the novel coronavirus continues, the Labour Board said on Tuesday.

The government, which expects the economy to shrink 4% this year as a result of the virus outbreak, has already announced extra spending worth around 100 billion crowns as well as 550 billion to 600 billion in loans and guarantees to businesses.

Getinge, one of the world’s biggest makers of medical ventilators, said earlier this week it was ramping up ventilator production capacity this year by 160% to 26,000 units to meet demand spurred by the pandemic.

Quarterly order intake shot up 47% organically from a year earlier to about 9.45 billion crowns ($939.7 million).