Commodity currencies slip against safe-haven units such as dollar, yen 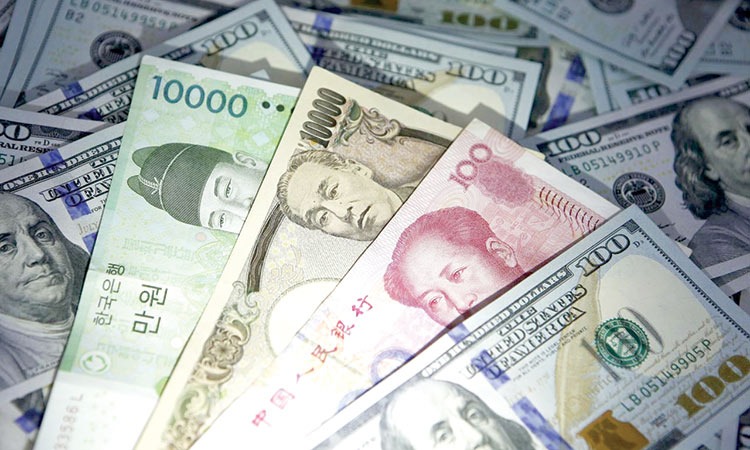 The greenback drifted higher against its Australian and New Zealand counterparts. Reuters

Commodity currencies slipped against their safe-haven rivals such as the dollar and yen on Monday as a record output cut, agreed by OPEC and other oil producing nations, failed to offset broader concerns about slumping global demand.

A commodity currency is a name given to some currencies that co-move with the world prices of primary commodity products, due to these countries’ heavy dependency on the export of certain raw materials for income.

The greenback drifted higher against its Australian and New Zealand counterparts, widely seen as barometers for market risk, in a sign investors remain concerned about the consumption outlook for commodities.

Financial markets remain on edge over the spread of the novel coronavirus as severe restrictions on personal movement drag the global economy into a deep recession.

“The initial reaction suggests that the decline in oil demand is well ahead of the output cuts that were agreed,” said Yukio Ishizuki, FX strategist at Daiwa Securities in Tokyo.

“This is a negative for oil producers. This also encourages risk-off trading, which should support the yen.”

Against the Canadian dollar, the US currency held steady at C$1.3945. Trading could be somewhat subdued as financial markets in Australia, New Zealand, Hong Kong, and Britain are closed for the Easter Monday holiday.

Major oil producers agreed to the output cuts on Sunday to prop up oil markets as the pandemic severely curtailed global demand.

Oil prices had gone into freefall on worries about the virus and a price war between Saudi Arabia and Russia, which was seen straining the budgets of oil producers and hammering the US shale industry.

currencies from Norway, Mexico, and Canada - all major oil producers - got a boost on Friday as the agreement to cut output began to take shape, but these gains disappeared on Monday as investors avoided risk assets.

While oil futures erased early losses to trade higher, moves in currencies highlighted investor trepidation over the prevailing uncertainty in markets. Other currency traders pointed to a decline in US stock futures as a supportive factor for risk-off trades.

The cautious mood boosted the yen, which is often sought as a safe-haven during times of market and economic stress because of Japan’s current account surplus.

The yen rose 0.62 per cent to 107.83 per dollar on Monday and jumped more than 0.5 per cent against the Australian and New Zealand currencies.

In the onshore market, the yuan eased slightly to 7.0465 per dollar after officials reported a rise in coronavirus cases on the Chinese mainland. The coronavirus first emerged in China late last year and has dealt the world’s second-largest economy a serious blow.

China will be releasing export data for March on Tuesday, and is set to show shipments continued to contract. Analysts will be closely watching for details on overall trade to gauge the pandemic’s damage on the global economy.

Against the safe-haven Swiss franc, the greenback held steady at 0.9644.

The dollar edged up to $1.0950 per euro. Further declines in the dollar may be limited with speculative net short positions in the US currency having risen to their highest since May 2018, according to calculations by Reuters and US Commodity Futures Trading Commission data.

The Australian dollar erased early losses to trade at $0.6348. The New Zealand dollar fell 0.16 per cent to $0.6081 as investors shunned risky trades.

Sterling retained gains made after Prime Minister Boris Johnson left hospital for treatment of COVID-19, the illness caused by the coronavirus.