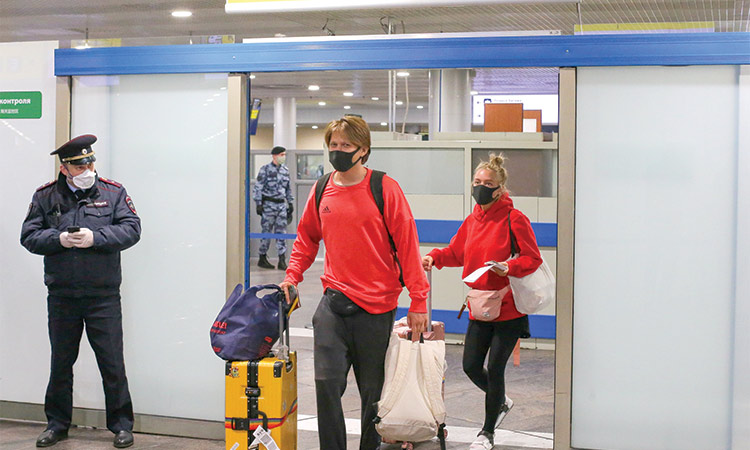 Passengers walk past law enforcement officers at an airport in Moscow. Reuters

The number of passengers flying with Russian airlines fell by 26.6% in March, Russia’s federal aviation agency Rosaviatsiya said on Thursday, citing restrictions imposed in connection with curbing the spread of the coronavirus.

Russian carriers served 6.57 million people in March, a sharp decline year-on-year. First-quarter numbers were also down to 23.4 million passengers, a drop of 5.3% year-on-year.

Russia said it had resumed some international flights to repatriate its citizens after having suspended all flights last week to curb a potential new wave of coronavirus infections.

Passengers, who arrived at Sheremetyevo International Airport on a flight from Thailand amid the coronavirus pandemic, cleared by law enforcement officers inside a terminal building in Moscow on Tuesday.

The operational centre monitoring the outbreak said two flights carried Russian nationals - one from the Kyrgyz capital of Bishkek and one from Dhaka, Bangladesh.

But on Friday authorities temporarily suspended all flights to prevent a spike in new coronavirus cases.

Many regions including Moscow, the epicentre of Russia’s outbreak, have imposed partial lockdowns to combat the virus.

Russia’s main home-grown passenger plane, the Sukhoi Superjet 100, will be used by the United Nations for its peacekeeping missions after a contract was signed last month, according to Rosaviatsiya, Russia’s federal air transport agency.

The aircraft, which entered service in 2011 and was the first passenger jet built in Russia since the fall of the Soviet Union, has had a troubled history despite the state pouring billions of dollars into its development. Last year, a Superjet crash-landed in Moscow, killing 41 people.

U.N. peacekeeping spokesman Nick Birnback said: “We are currently finalising several contracts for stand-by, short term air transport services that could be used in support of our field operations -including peacekeeping.”

Earlier this year, two sources told Reuters that there had been no confirmed orders for the Sukhoi Superjet 100 beyond a long-standing deal with state carrier Aeroflot. “In March 2020, the first U.N. contract was received for using Sukhoi Superjet 100 planes to provide services for U.N. peacekeeping missions,” Rosaviatsiya said in a statement.

Yakutia Airlines, based in the Siberian city of Yakutsk, around 4,880 km (3,030 miles) east of Moscow, did not immediately respond to a Reuters request for comment.

Russian helicopters, provided by UTair, are already used by the United Nations.

Asked about the Superjet contract, a spokesman for the United Nations said it uses a number of different vendors for its aviation needs. “Many of these contracts are for a standby capability that may or may not be required based on operational considerations,” the spokesman said.

Meanwhile, Russia is considering a six-month ban on gasoline imports to protect its market from a possible flood of cheap fuel, two government sources said on Tuesday, as measures to contain the coronavirus outbreak have destroyed demand and hammered prices.

The move is mainly aimed at preventing imports from neighbouring Belarus, where production of refined products is three times higher than its consumption. Russia imports gasoline from some other countries but in smaller volumes.

Industry sources said Russia may import 2,040 tonnes of gasoline from Belarus in April by rail.

The first government source told Reuters, speaking on condition of anonymity, the aim of a ban would be to get Russian fuel production “working normally”. The restrictive measures could last until October, he added.

According to Reuters data, gasoline sales at filling stations across Russia declined in early April by up to 60% from the year-earlier period.

Diesel sales, meanwhile, slumped by up to three quarters as Russian President Putin prolonged until April 30 a paid non-working period across Russia, stepping up measures to stem the spread of the coronavirus. The restrictions compound an already difficult economic situation in Russia after a sharp fall in the price of oil, its main export, pushed the rouble to four-year lows.

Moscow’s consideration of new restrictions on fuel imports follows a tentative agreement with neighbouring Belarus on the resumption of Russian oil supplies, which had significantly declined from Jan.1 because of a row over pricing.