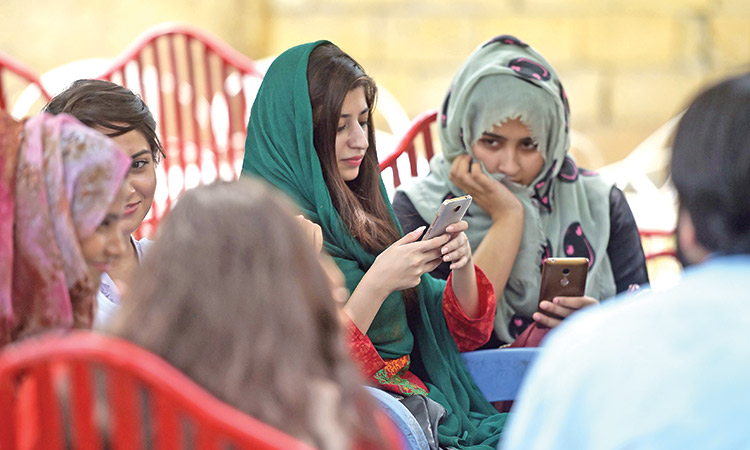 Students use mobile phones at a campus in Islamabad. Agence France-Presse

Pakistan’s total teledensity reached to 77.7% where the main contribution is by the mobile sector with penetration crossing 76.4%. The country has over 44,919 cell sites covering the length and breadth of the country.

According to the Annual Report 2018-19 issued by Pakistan Telecommunication Authority (PTA), telecom sector contributed over Rs96 billion to the national exchequer in terms of taxes, duties and levies, attracted investments to the tune of $636 million while sector revenue crossed Rs552 billion. Sector attracted $236 million foreign direct investment (FDI) during the year.

The Annual Report presents a comprehensive overview of the PTA and telecommunication sector’s performance for the year 2018-19. PTA Annual Report is a regular feature under section 18 of the Pakistan Telecom Reorganisation Act, 1996, depicting performance over previous year.

As per PTA Annual Report, telecom sector continued to grow positively in terms of subscription, revenues and teledensity. The sector showed a steady growth in subscribers and total subscriber base increased to 163.5 million at the end of FY 2018-19, showing a year-on year growth of 7%.

In order to promote latest technologies, PTA took number of initiatives. To set the stage for launch of 5G technology in future, PTA unveiled plans for tests and trials of 5G which is expected to reshape the technological, social and economic landscape of Pakistan. PTA as a regulator kept playing its role prudently by ensuring an open, competitive, fair and well-regulated sector.