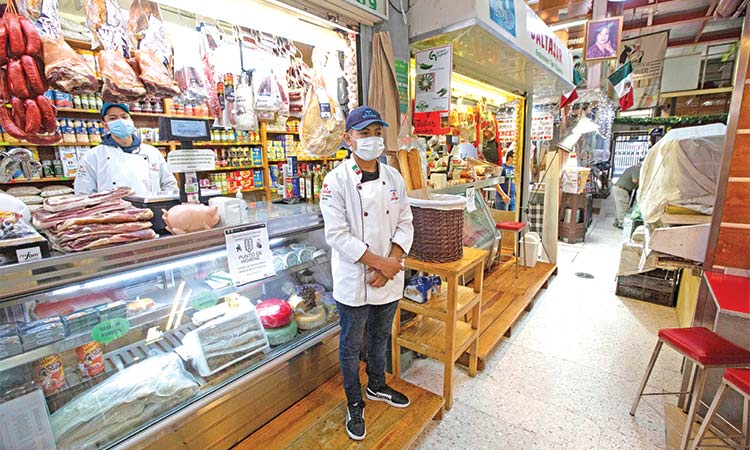 Share markets across the world fell on Thursday as nerves over jobs data likely to lay bare the economic carnage from the coronavirus pandemic outweighed a $2 trillion US stimulus package. The US Senate on Wednesday backed the massive bill aimed at helping jobless workers and industries reeling from the disruption caused by the outbreak, with the package heading for the House of Representatives for a vote on Friday.

Yet already questions flew over whether the bill would do enough to soften the disease’s economic hammer blow, with investors bracing for a US jobs report to show a huge spike in unemployment in the world’s biggest economy.

Europe’s broad Euro STOXX 600 fell 1.8%, with bourses in Frankfurt, London and Paris all down around 2.5% as a two-day rally faltered.

The sour mood was worsened by slumping consumer morale in Germany and data showing stagnant retail sales in Britain last month, even before the virus hit.

E-mini futures for the S&P 500 last traded down 1.3%, pointing to a weaker start on Wall Street, while the MSCI world equity index, which tracks shares in 49 countries, was flat.

Global markets have lost about a quarter of their value in the last six weeks of virus-driven selling.

And while markets have found a measure of sustenance as governments and central banks launch unprecedented support measures, investors were struggling to work out how bad the coronavirus impact would be.

“No-one is sure how long things are going to be locked down for, how wide the virus will spread in the US, what the death toll and hit on the economy will look like,” said Salman Baig, portfolio manager at Unigestion.

The Nikkei snapped three days of gains in Tokyo with a 4.5% drop, while Australia’s benchmark rose for a third day - its longest winning streak in six weeks.

Markets were to get a glimpse of the on-the-ground damage to the US economy, with data on jobless claims due at 1230 GMT. Forecasts in a Reuters poll ranged from 250,000 to 4 million unemployment claims.

RBC Capital Markets economists had expected a national figure of more than 1 million, but say “it is now poised to be many multiples of that”, as lockdowns drive deep lay-offs.

“In less than two weeks, we have moved from full employment to a number of job destruction we have never experienced in a period of peace,” wrote Christopher Dembik, head of macro analysis at Saxo Bank.

Though the money at stake in the stimulus bill amounts to nearly half of the $4.7 trillion the US government spends annually, it comes against a backdrop of bad news as coronavirus spreads and signs of growing economic damage across the globe.

Tokyo’s governor asked residents to avoid going out and to “act with a sense of crisis”. Spain’s coronavirus death toll has overtaken China’s, while deaths globally have reached more than 21,000.

In Singapore, the economy suffered its biggest contraction in a decade in the first quarter and factories posted their largest output drop since records began in 1983.

The growing sense of unease over the US jobs figures also played out in currency markets.

The dollar lost 0.8% against a basket of six major currencies to 100.150 as its recent rally continued to lose steam. It also slumped 1.4% against the perceived safety of the Japanese yen, extending losses through the morning.

Oil fell as fears of plunging demand outweighed expectations of support from the US stimulus. Brent crude futures fell 0.5% to $27.25, clawing back some of their earlier losses.

Gold steadied on Thursday, paring losses from a 1% dip earlier in the session, as the dollar’s rally faded and some safe haven buying returned on expectations of a huge jump in US jobless claims due to the coronavirus pandemic. Spot gold was little changed at $1,612.14 per ounce by 1102 GMT. “Short term, initially gold may rise when stocks fall because it’s a safe haven asset. However if selling in stocks continue, funds may see margin calls and need to sell gold for cash,” said Samson Li, a Hong Kong-based precious metals analyst at Refinitiv GFMS “Long term, with all the liquidity central banks are injecting into the system, there will be massive purchasing power destruction in the future, which will be good for gold.” Data showing US initial jobless claims is due at 1230 GMT, with forecasts ranging from 250,000 claims to 4 million. These expectations stalled a rally in the dollar, bolstering gold’s appeal, and drove world stocks lower. The US Senate on Wednesday overwhelmingly backed a $2 trillion bill aimed at helping unemployed workers and industries hurt by the coronavirus, but that did little to prop up risk sentiment. This came after the US Federal Reserve said on Monday it would buy bonds in unlimited numbers and backstop direct loans to companies.