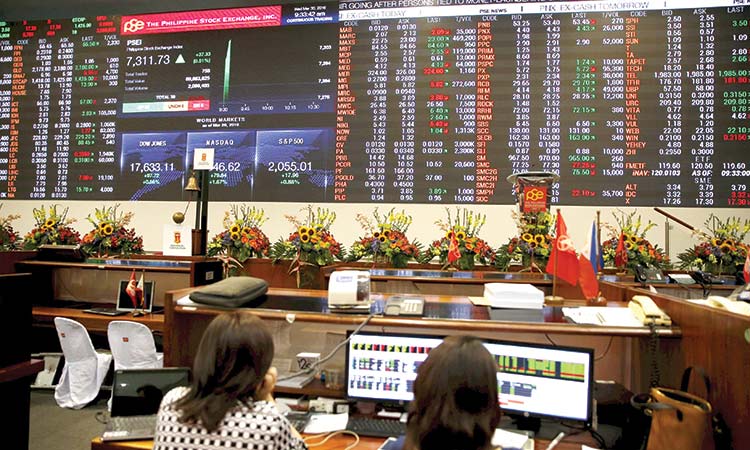 Traders at the Philippine Stocks Exchange in Manila. File/Reuters

The Philippine Stock Exchange closed indefinitely on Tuesday while currency and bond trading were put on hold, the first shutdown of markets worldwide in response to the coronavirus, with authorities citing risks to the safety of traders.

The move comes after some bourses around the world closed trading floors or paused trade after withering falls in market value. It is the first blanket market halt.

And while the Philippine shutdown was prompted by health reasons, amid a broad nationwide lockdown, it raises the prospect other exchanges may follow and has drawn analysts’ attention.

“Given the unprecedented speed of the slump in equity prices, it has been suggested that stock exchanges might be closed soon if things don’t turn around,” research house Capital Economics said in a note on Tuesday.

Global markets are in meltdown as the pandemic spreads, with roughly $14 trillion in shareholder value erased and even safe assets such as gold have been sold to cover losses.

AdMacro research head Patrick Perret-Green had also raised the possibility in a note issued over the weekend, before the Philippines move.

“We have seen it before. I believe we could see it again,” he said. “Governments do not need or want the added stress and distraction at this time.”

The Philippine Stock Exchange said trade was suspended until further notice “to ensure the safety of employees and traders,” amid a broader national lockdown. National Treasurer Rosalia de Leon cited the lockdown as the reason for the suspension of fixed income trade. Currency trading is to resume on March 18.

In Malaysia, where a similar lockdown comes into force on March 18, the securities regulator said all capital markets will operate as usual.

China had delayed the resumption of work, including stock market trade, after the Lunar New Year break.

Opinions are divided, though, on whether a suspension of a stock market that includes giant conglomerates like San Miguel Corporation, can actually support sentiment.

Renzo Louie Candano, analyst at DBP-Daiwa Capital Markets in Manila, said it would give investors time to evaluate whether the sell-off is warranted.

Others say it could exacerbate volatility when trading does resume, while possibly hurting the government’s ability to raise funds in the bond market. “With markets closed, it would be puzzling how additional government bonds would be issued and received by markets,” said Ken Peng, head of Asia investment strategy at Citi Private Bank.

“Especially when investors cannot get liquidity out of their stock and bond holdings.”

The Philippines benchmark index fell 8% on Monday and is down 20% for March so far, already its worst month since October 2008, while bond prices have also collapsed.

The yield on 10-year government debt, which rises when prices fall, jumped 63 basis points on Monday, the sharpest rise since September 2018.

The Philippines government announced on Monday a 27.1 billion pesos ($524.8 million) package help fight coronavirus and provide help to those hit by economic losses.

The central bank on Monday said it might consider a 50 basis points policy rate cut at its meeting on Thursday to counter the economic impact.

The Philippines’ largest budget carrier, Cebu Air said on Tuesday it is canceling all domestic and international flights starting from March 19 to April 14.

The airline, which operates under the brand Cebu Pacific, said it is supporting the Philippine government’s quarantine measures to help prevent the further spread of the coronavirus.

“We are ensuring the safety of our passengers and operations teams, in compliance with the stricter quarantine measures, land travel restrictions and regulations in place,” the carrier said in a statement.

The Philippines announced strict home quarantine measures on Monday for half of its population, shut down transport networks and ordered businesses to close or operate remotely in a bid to quell rising coronavirus cases.

In a televised announcement, President Rodrigo Duterte said existing travel restrictions and containment measures were not enough to arrest the spread so it was time to lock down the country’s main island to minimise social contact and allow health workers to move quickly to control the contagion.

Duterte told mayors to act decisively to enforce quarantines and said violators of the lockdown would be arrested by police and the military and faced jail.

“Make no mistake, we are in the fight of our lives,” Duterte said.

“We are at war against a vicious and invisible enemy. One that cannot be seen by the naked eye. In this extraordinary war, we are all soldiers.”

The measures, if implemented fully, would be among the strictest in place in Asia, as the country of 107 million people tries to contain an outbreak that has seen confirmed cases rise sharply to 142 - from only three cases 10 days ago - with 12 deaths.