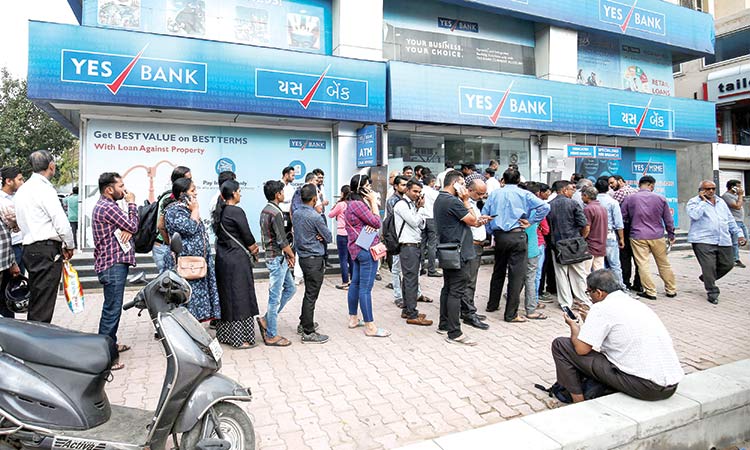 The Indian rupee weakened to 74.05 against the US dollar, compared to its previous close of 73.6. The rupee traded at 20.09 against the UAE Dirham.

The Reserve Bank of India (RBI) said late on Thursday it had taken over the Mumbai-based bank’s board for 30 days and imposed limits on withdrawals, due to a serious deterioration in the fifth-largest private sector lender’s financial position.

The Nifty Bank sub-index fell as much as 5.74%, also weighed by a 12% slide in shares of top lender State Bank of India.

The state-owned bank said late on Thursday its board had given an in-principle approval to explore an investment opportunity in Yes Bank.

“We are seeing hits across the board in the market today, as a lot of people had big positions in F&O in Yes Bank,” said Deepak Jasani, head of retail research at HDFC Securities.

“A lot of buying happened on Thursday in Yes Bank, and these buyers and older investors could be selling now. To cover their losses, these traders may have to sell other stocks as well,” he said.

Yes Bank closed 25.6% higher on Thursday after reports that a group led by State Bank of India (SBI) would inject capital into the bank.

Sentiment was also dampened by declines in Asian shares and US stock futures following another Wall Street rout as disruptions to global business from the coronavirus beyond China worsened, stoking fears of a prolonged world economic slowdown.

Shares in India’s Yes Bank plunged on Friday as panicky depositors rushed to withdraw funds after the central bank took control in a dramatic late-night move and limited withdrawals from the troubled lender.

The shock move by the Reserve Bank of India followed months of steady deterioration in the financial position of the country’s fifth-largest private lender and growing concerns over governance.

Shares of Yes Bank plunged as much as 85% to wipe out more than $1 billion of market value, marking the biggest intra-day fall in an Indian blue-chip stock. By early afternoon, the stock was down 60% after paring losses.

As thousands of customers rushed to pull out funds and tempers flared at overcrowded branches nationwide, police deployed in some states to help control the crowds.

Many business owners feared the central bank’s move would hit their operations too, as the lender, with 1,000 branches across India, has many commercial clients.

“I will struggle to pay salaries to my staff, or pay any of my vendors, because of the restrictions,” said Chintan Patel, a building contractor in the western city of Ahmedabad.

Many customers took to social media to complain that the bank’s online system was down, preventing fund transfers, while payment apps, such as PhonePe, which use Yes Bank to help process transactions, were also affected.

“Effectively, Yes Bank should have no equity value left,” said Sandip Sabharwal, a Mumbai-based fund manager. “Ideally, trading should be suspended till formal restructuring is announced.”

The rout of Yes Bank sent the broader market and the banking index into a tailspin.

The RBI placed Yes Bank under a moratorium on Thursday, and said it would swiftly work on a revival plan.

In a note, rating agency Moody’s said the moratorium was credit negative as it affected timely repayment of depositors and creditors. It said the lack of coordinated action underlined continued uncertainty over bank resolution processes in India.

“Let me assure you that the Indian banking sector continues to be sound and safe,” Das said on Friday. “We stand committed to maintain stability in the financial and banking sector.”

“RBI’s move was inevitable, and was in the offing for some time,” said Deepak Jasani.

“The collateral damage it will have on the equity markets and debt investors is something that we have to be worried about in the near-term.”