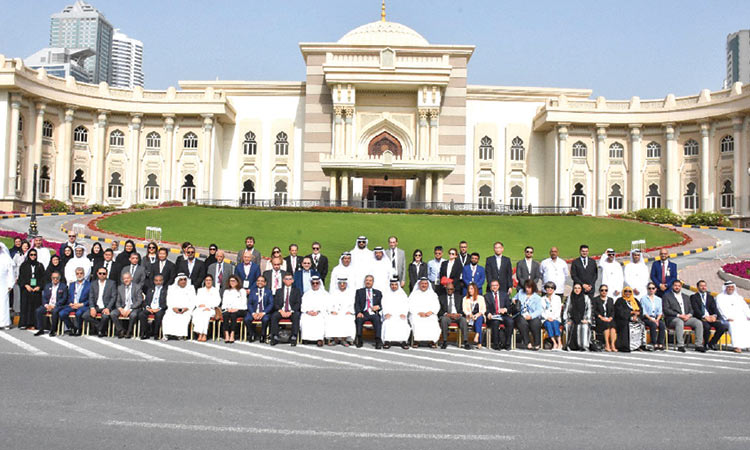 Sharjah officials and participants of the tour.

Under the theme “Sharjah the Smiling Innovation Environment”, the Sharjah Chamber of Commerce & Industry (SCCI) organised on Monday a tour to the Sharjah Investors Services Centre “Saeed” and the Sharjah Research, Technology and Innovation Park.

The tour targeted the heads and members of labour councils in the UAE to brief them about the most important cultural landmarks of the Emirate of Sharjah and introducing them to its major leading projects, its future innovative plans, and the continuous progress and development it witnesses in economic, tourism and cultural sectors.

Abdullah Sultan Al Owais, stressed that organising the 2nd edition of the Business Councils Tour comes as part of the SCCI’s strong belief that is one of the most important means aimed at strengthening ties between different countries and supporting mutual relations between economic sectors and business circles in those countries.

“The tour is also a significant milestone for businessmen and officials to reinforce the means of communication and consolidate the relationships that have arisen and developed over the past years.”

Waleed Abdul Rahman Bukhatir said “The positive impact of this initiative was apparent in its 1st edition, in terms of the level of economic and commercial cooperation between Sharjah and the various friendly countries. Such tours would ultimately help serve the business communities after closely learning about Sharjah’s advantages and investment opportunities in various domains besides its regional and global role economically and commercially,”.

“This year’s tour includes a number of institutions reflecting the progress made by the Emirate of Sharjah in all sectors, especially in the field of trailblasing and distinguished services provided to investors, development projects, and development of public facilities as well as to provide a glimpse of the most important innovative future projects, research, and technology, and highlight the activities and projects in the Emirate of Sharjah, which clearly reflect the theme of our tour,” he added.

Mohammad Ahmed Amin Al-Awadi said: “The primary goal of this tour is to highlight the progress made by the Emirate of Sharjah in all sectors and promote its regional role economically, commercially and culturally, as well as the advantages and incentives offered by the Emirate to business community, in addition to shedding light on the Emirate’s efforts to achieve the holistic and sustainable development, and other development projects as part of its ambitious economic vision based on economic diversification.”

“The SCCI is keen on organising this tour regularly as part of its eagerness to the support and success of the activities of Business Councils and to consolidate the partnership between the public and private sectors, thus scaling up the business environment to the highest levels, in line with the efforts made by the Sharjah Chamber to enhance Sharjah’s regional position and global reputation as a leading economic hub and attractive environment to investors in all fields,” added Al-Awadi.