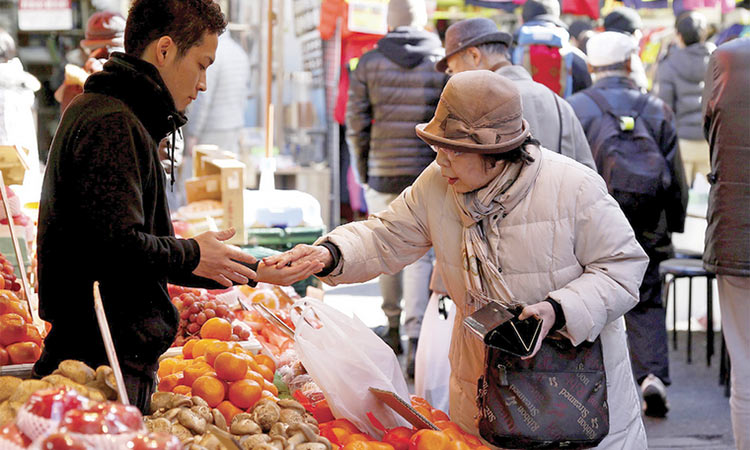 Japan’s annual core consumer inflation picked up only slightly in January, keeping the Bank of Japan under pressure to maintain its massive monetary stimulus to support a fragile economy saddled with weak growth and prices.

Stubbornly tame inflation is a worry for the world’s third-largest economy as it grapples with a coronavirus outbreak and weak growth. The Bank of Japan is in no mood to top up its already huge monetary stimulus, fearing it would have little ammunition to battle the next financial crisis.

However, BoJ Governor Haruhiko Kuroda has said he would consider additional easing if the coronavirus outbreak significantly threatens Japan’s economy and inflation, calling the flu-like virus the “biggest uncertainty” for the economy.

The core consumer price index, which includes oil products but excludes volatile fresh food prices, rose 0.8% in the year to January, Ministry of Internal Affairs and Communications data showed. That followed a 0.7% gain in December and matched economists’ median estimate.

The so-called core-core price index, which excludes food and energy prices and is closely watched by the central bank as a narrower gauge of inflation, rose 0.8% in the year to January, it showed.

Stripping out the impact of a sales tax hike to 10% from 8% in October and some other policy steps, the core CPI index rose 0.4% in January from a year earlier and the core-core inflation index rose 0.6%, both unchanged from December, the data showed.

Friday’s data comes after a batch of gloomy indicators this week highlighted a fragile economy. Exports fell again in January, a key gauge of capital spending tumbled the most since 2018, and gross domestic product (GDP) suffered its deepest contraction since the second quarter of 2014.

The Japanese economy shrank an annualised 6.3% in October-December, the biggest drop in nearly six years, as domestic demand took a hit from the tax hike, typhoons and a warm winter.

Some economists expect a contraction in growth this quarter, which will mean a technical recession, as the virus outbreak hits China’s economy - Japan’s largest trading partner and the core of global supply chains.

Bank of Japan Governor Haruhiko Kuroda said he was watching the coronavirus impact on the economy with “grave concern,” in a nod to the growing toll the epidemic is taking on manufacturing activity and exports across Asia.

The fallout from the health crisis will be a main topic of debate at a Group of 20 finance leaders’ meeting in Riyadh, Kuroda said on Friday, in a sign it could overshadow the weekend meeting of the world’s top economies.

Massive business disruptions in China are starting to spillover into the global economy, with parts shortages rippling through supply chains as far away as the United States. Asian economies that are heavily reliant on exports to China and Chinese tourists are being hit hard on both fronts.

“Huge uncertainty remains on how the spread of the new virus may affect the Japanese economy,” Kuroda told parliament.

“We’re watching the impact with grave concern and keeping a close eye on downside risks,” he added. The epidemic has already extracted a heavy human and economic toll in China, with over 2,200 deaths, prompting authorities to take strict containment measures.

Retail sales of passenger cars in China plunged 92% on an annual basis in the first 16 days of February, according to China Passenger Car Association (CPCA).