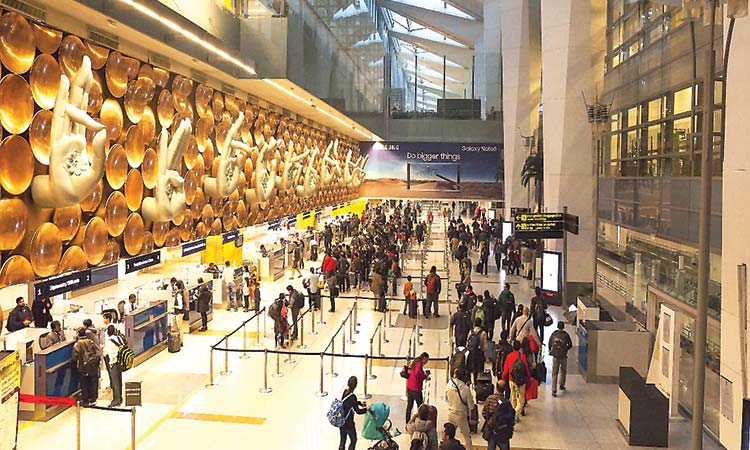 View at the arrival hall in Indira Gandhi International Airport in New Delhi.

GMR Infrastructure (GIL) has entered into a strategic partnership with France’s Groupe ADP to sell 49 per cent stake in its airports arm for an equity consideration of Rs10,780 crore.

GIL signed a share purchase agreement with Groupe ADP for the stake sale which will value GMR Airports Ltd (GAL) at the base post money valuation of Rs22,000 crore.

“This equity consideration comprises Rs9,780 crore towards secondary sale of shares by GMR group, and Rs1,000 crore equity infusion in GAL,” GIL said in a statement.

“Groupe ADP has also pegged ‘Earn-outs’ of up to Rs4,475 crore linked to achievement of certain agreed operating performance metrics as well as on receipt of certain regulatory clarifications over the next five years. The total valuation, assuming all above ‘Earn-outs’ are successfully consummated, may reach Rs 26,475 crore on ‘Post Money Basis’,” it said.

As per the statement, the first tranche of Rs5,248 crore will be received by GMR Group immediately.

“This money will help deleverage the Group further and result in improved cash flows and profitability. As part of the terms of transaction, GMR will retain management control of the airports business while Groupe ADP will have the customary rights and board representation at GAL and its key subsidiaries,” the statement said.

The development assumes significance since last year GIL had announced a pact with Tata Group and other investors to divest 49 per cent stake in its airports business. However, there has been no movement regarding the same.

While greenfield projects under development include airport at Mopa in Goa and at Heraklion, Greece, in partnership with GEK Terna.

Furthermore, the group recently signed concession agreement to commission, operationalise and maintain the civilian enclave at the Bidar Airport in North Karnataka.

Groupe ADP operates 26 international airports. It owns 46,1% of TAV Airports Holding, and 8% of the Schiphol Group. Since 2012, the CEO is Augustin de Romanet. Groupe ADP is owned by the company Aéroports de Paris SA, which is publicly listed at the Euronext Paris.

GMR Airports has recently bagged the contract for duty-free shops at Kannur international airport in Kerala.

The DFS contract is extendable by another three years, it added.

This is the first duty free concession outside GMR’s airport portfolio, as per the release.

“We are very happy to be partnering with KIAL to develop, operate and manage the duty-free outlets at Kannur international airport. We are excited about the potential of this airport,” said SGK Kishore, Executive Director – South, GMR Airports. Kannur airport largely caters to the significant number of diaspora from this region, who works in the Middle East, the release added.

The airport handled around 1.14 million passengers between April-November period of this fiscal, of which around 0.54 million were international flyers, as per the release.

GMR Infrastructure’s subsidiary secured a contract to build and operate an airport in Greece.

GMR Airports, a subsidiary of the company, has achieved the concession commencement date (CCD) for design, construction, financing, operation, and maintenance of new international airport of Heraklion at Crete, Greece.

A fee of INR 2,000 or its equivalent in foreign currency per passenger, including children, will be charged.