India to open up dairy, poultry markets for US under new deal - GulfToday

India to open up dairy, poultry markets for US under new deal 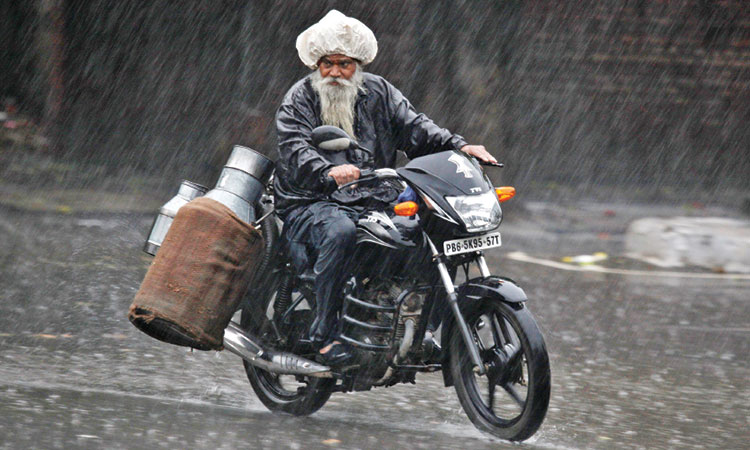 A milkman rides a motorcycle during a heavy shower in the northern Indian city of Chandigarh. Reuters

India is likely to give the US access to its dairy and poultry markets in exchange for renegotiated terms for its pharmaceutical, textile and industrial exports under a new bilateral trade deal to be signed during President Donald Trump’s visit to New Delhi later this month.

Top sources told IANS that India is willing to partially open up its traditionally protected sectors − dairy and poultry − on the condition that the US grants India better terms for its pharmaceutical, textile and agro-machinery products.

The Indian offer, sources said, is in view of President Trump’s lament that US has had a trade deficit of $65 billion with India. However, in 2018, the deficit had reduced to $25.2 billion while the US and India trade of goods was worth $142.6 billion.

“India is the world’s largest milk producer but our dairy economy is not sound given the production cost and unaffordability of keeping the cattle once they stop producing milk. Similarly, there is a huge environmental cost to poultry,” a top source familiar with the negotiations of the trade deal between the US and India, said.

The government in New Delhi has made the offer to the US, its second-largest trading partner, after making a thorough assessment of India’s traditionally protected markets which have already been opened up.

“When India gave access to China, New Zealand and Australia to the apple market, many feared that it would lead to the collapse of the domestic apple industry. None of it turned out to be true,” a source said, adding the opening up of dairy and poultry will not hurt the domestic market either.

Sources said, India has also shown willingness to reduce its 50 per cent tariffs on Harley-Davidson very large motorcycles to please President Trump who gave India the epithet of “tariff king” on Twitter over the issue.

The lowering of tariff won’t have much impact because very few bikes of Harley Davidson are sold in India, sources said.

Incidentally, the United States Trade Representatives (USTR) removed India from the list of ‘developing’ countries while the negotiations over the trade deal are ongoing. Sources said the USTR member Robert Lighthizer cancelled plans for a trip to India this week because both sides are fighting hard for a deal which is a win-win for both.

“If India aspires to be counted among the big players, it has to compete. Don’t think it served any purpose to stay in the developing list since there wasn’t any scope of getting any more preferential treatment under the US countervailing duty (CVD) laws. In 2018, our export of goods were over $300 billion. There isn’t any room for preferential treatment if we want to exceed our exports and get into the bracket of $600 billion worth exports,” an official in New Delhi said.

Thailand, Vietnam, Brazil, Indonesia and Malaysia, which are economically thriving countries, have also been removed from the list.

Sources said India expects the US to give India better terms for trade in pharmaceuticals. In 2018, India exported only five billion dollar worth drugs and pharmaceutical products to the US.

The Food and Drug Administration (FDA) and the US patent protection laws prevent India from exporting drugs and medical equipment which are produced cheaply in the domestic market. The US must open up its market for us, sources working on the deal said.

The US dairy industry remained skeptical on Thursday that a viable deal is at hand.

“We’re always looking for market access, but in terms of India, as of today I’m not aware of any real progress going on,” said Michael Dykes, president of the International Dairy Foods Association and a member of USTR’s agricultural trade policy advisory committee.

Dykes said the US dairy industry was looking for access in viable commercial quantities.

A USTR spokesman and India’s trade ministry did not respond to requests for comment.

An Indian parliament panel is reviewing a draft data privacy law that imposes stringent controls over cross-border data flows and gives the government powers to seek user data from companies.

It is not clear whether it will be passed, or in what form, but the possibilities have unnerved https://www.reuters.com/article/us-india-dataprivacy-idUSKBN1YM0GL US companies and could raise compliance requirements for Google, Amazon.com Inc, and Facebook.

The draft law is not part of the trade discussions, Indian officials say, because the issue is too difficult to resolve at the same time.