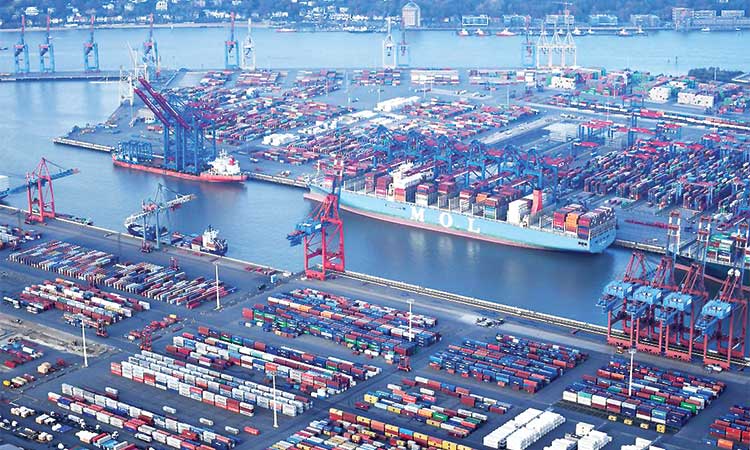 Europe’s biggest economy has been losing momentum as its manufacturers linger in a recession prompted by a reduction in exports. Reuters

The German economy stagnated in the fourth quarter due to weaker private consumption and state spending, data showed on Friday, renewing fears of a recession just as Chancellor Angela Merkel’s conservatives are preoccupied with a search for a new leader.

Europe’s biggest economy has been losing momentum as its manufacturers linger in a recession prompted by a reduction in exports while its automotive sector faces disruption from an expensive shift to electric cars.

Private consumption and state spending have been providing growth impetus and, if those two sectors continue to weaken this year, the risk of recession will rise.

“We think the economy will continue to flirt with recession in the first half of this year,” Andrew Kenningham of Capital Economics wrote in a note.

One bright spot from the preliminary data was an upward revision in the third-quarter growth figure to 0.2% from a previously reported 0.1%.

The Federal Statistics Office said investments in the construction sector grew in the fourth quarter, while spending on machinery and equipment declined considerably compared with the July-to-September period. Exports also weakened in the final three months of last year, it said. Merkel’s government has resisted calls for a fiscal stimulus to put the economy firmly back on a growth path.

Those calls will grow louder if the economy fails to rebound, a likely scenario given that manufacturers are expected to face headwinds from the economic impact of the coronavirus outbreak in China.

But Merkel’s government is unlikely to loosen the purse strings. Her conservative party is in crisis after an eastern branch voted with the far right to elect a state governor, forcing the leader of her Christian Democrats (CDU) to abandon her ambitions to succeed the chancellor.

Annegret Kramp-Karrenbauer, who after the scandal said she would quit as CDU leader, is searching for a successor to lead the conservatives into the next election, due in October 2021.

Both Merkel’s conservatives and their Social Democrat (SPD) coalition partners are likely to suffer losses in a national election. SPD Finance Minister Olaf Scholz has dashed hopes of a massive stimulus by sticking to Germany’s policy of no new debt.

The crisis in the conservative party makes it even less likely that the government will take drastic fiscal measures to lift the economy.

Kenningham said the coronavirus, which is impacting both the global supply chain and demand from China, could result in weaker German growth in the first quarter of this year.

The outlook for the German economy is also darkened by uncertainties linked to Britain’s Jan. 31 exit from the European Union as well as a threat by US President Donald Trump to impose higher tariffs on car imports from Europe.

Germany’s DIHK Chambers of Industry and Commerce said the quarterly stagnation should be a wake-up call for the government to increase investments and cut corporate taxes.

“Now is the time for politicians in this country to courageously do its economic homework,” said DIHK Managing Director Martin Wansleben. “Businesses urgently need relief signals: the fast implementation of investment projects and tax cuts should be high up on the government’s agenda.” On the year, gross domestic product in Germany expanded by 0.4% from October through December after a 0.6% expansion in the previous three months, seasonally adjusted figures from the Federal Statistics Office showed. Analysts polled by Reuters had expected a 0.1% expansion quarter-on-quarter and a 0.4% expansion year-on-year in seasonally adjusted terms.

The euro fell again to a nearly three-year low on Friday amid worries about slowing growth in the euro zone, as fourth-quarter data confirmed the economy’s sluggish performance.

The euro has lost close to 1% so far this week and is on track for its worst two-week performance since mid-2018.

euro zone gross domestic product grew 0.1% quarter-on-quarter in the fourth quarter, in line with forecasts. Year-on-year growth was weaker than expected, at 0.9%, although employment grew more than expected.

The euro fell to $1.0827 overnight before settling at $1.0841, down on the day. It was unchanged after the euro zone data was released.