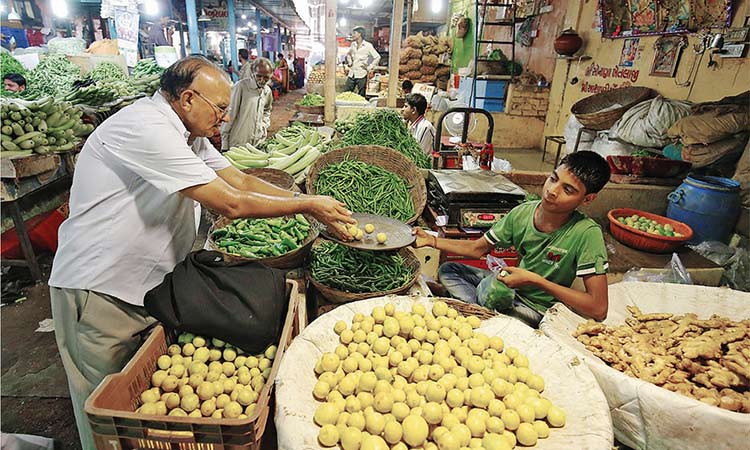 India’s real GDP growth fell to a more than six-year low of 4.5 per cent year-on-year in the second quarter of this fiscal year. Reuters

According to the agency, the ratings on India reflect the country’s above-average real GDP growth, sound external profile, and evolving monetary settings.

“These strengths are balanced against vulnerabilities stemming from the country’s low per capita income and consistently elevated fiscal deficits that contribute to high general government debt, net of liquid assets.” Besides, the ratings agency said it expects India to continue to achieve strong real GDP growth that is well above the average for peers at a similar income level.

“This is despite a recent deceleration in economic growth,” S&P Global said in a statement.

“In our view, the Indian economy has slowed measurably. Real GDP growth fell to a more than six-year low of 4.5 per cent year-on-year in the second quarter of this fiscal year (ending March 31, 2020). This is the fifth consecutive quarter of decline in year-on-year growth rate.” Furthermore, the ratings agency said that tighter lending conditions continue across the financial system, particularly in the public sector which is reflected in a gradual decline in credit growth.

“Weaker sentiment in the NBFI space may limit private consumption growth over the coming quarters,” the statement said.

“The government’s August 2019 announcement that it will consolidate major public sector banks may also constrain credit growth over the next 12-24 months. That’s because resources at the affected banks will likely be diverted toward merger fulfilment.” Nevertheless, the ratings agency said that India is experiencing a cyclical, rather than a structural, economic slowdown.

“A more favourable corporate tax regime, which is particularly supportive of manufacturing firms, should reinforce growth, alongside additional fiscal and monetary easing.” “On the regulatory front, recent steps by the government forced all financial institutions to fully account for their non-performing assets, and take painful steps to repair their balance sheets.” Similarly, new laws to better regulate the real estate sector and boost the rights of financial creditors disrupted earlier business practices, contributing to a slowdown in many sectors.

“The implementation of India’s complicated national goods and services tax (GST) has also created some disruption as state and central governments gradually modified details of the tax. Over time, progress in these areas should help boost GDP growth,” the statement said.

However, the agency noted that India’s economic growth faced headwinds over the near term, including subdued private sector investment and sentiment, labour market difficulties, and soft demand conditions.

“However, we believe the country’s long-term outperformance will remain intact.” In addition, the agency said that India’s fiscal deficits will be higher in this fiscal and the next, largely due to the economic slowdown and substantial cuts in corporate taxs.

“The government’s ability to execute its proposed sale of Life Insurance Corporation shares will play a key role in determining its short-term fiscal performance,” the statement said.

Separately, Indian markets closed lower on Thursday along with major world indices over a sharp rise in coronavirus-related deaths in China. Increase in retail inflation and prices of LPG cylinder also dampened the investors’ mood further.

The overall toll due to the deadly coronavirus outbreak in China has reached 1,367.

The Sensex closed 106 points lower at 41,459.79 after falling as much as 41,338.31 earlier in the day and the broader Nifty settled at 12,174.65 lower by 26.55 points. Banks and financial sectors stocks closed sharply lower, with ICICI Bank, Kotak Bank and HDFC Bank featuring as the top Nifty losers.

Vinod Nair of Geojit Financial Services said: “Spike in new coronavirus cases reported across the globe and rise in inflation level for January held markets flat as investors awaited for more cues. Consumer price inflation indicated a prolonged pause in the interest rate from RBI as rise in core inflation from 3.5 per cent to 4.2 per cent came as a surprise which is expected to impact rate-sensitive stocks.” Meanwhile, investors seemed to have ignored rating downgrade by India Ratings and postponement of its December quarter results after Yes Bank said it is in talks with JC Flowers, one of the world’s largest distressed asset investors to raise funds.