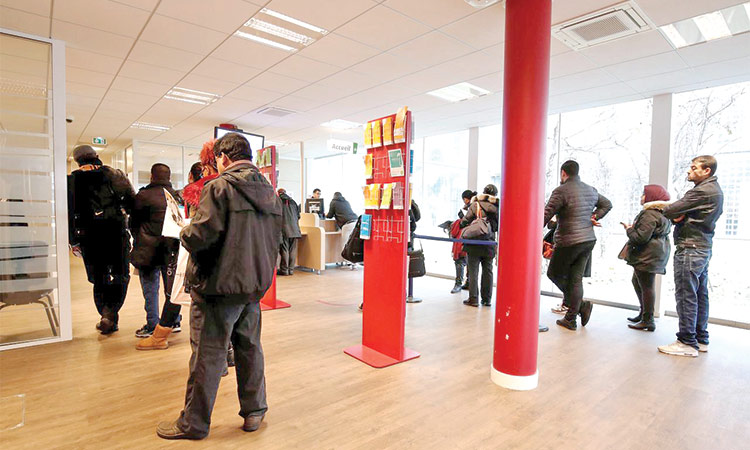 Job seekers wait to speak with staff at a National Agency for Employment office in Paris, France. Reuters

French unemployment fell unexpectedly at the end of last year to an 11-year low, official data showed on Thursday, offering President Emmanuel Macron a boost on the economic front.

The unemployment rate fell to 8.1 per cent in the final three months of last year from 8.5 per cent in the third quarter, which was revised down from an initial reading of 8.6 per cent, the INSEE statistics agency said.

The result brought the jobless rate to its lowest level since the fourth quarter of 2008. It far exceeded expectations for a rate of 8.5 per cent on average in a Reuters poll of 11 economists, with none expecting anything lower than 8.4 per cent.

The big drop will be a welcome development for Macron after he faced weeks of strikes over an overhaul of the pension system that was fiercely resisted by trade unions.

The fall in unemployment comes even though the economy contracted slightly in the final quarter, which economists mainly put down to the strikes hitting manufacturers’ supply chains.

Despite the weak finish to the year, the French economy last year outperformed other big eurozone economies like Germany because it has a smaller exposure to exports and thus the slowdown in global trade.

With demand at home firm, French companies have steadily added to staff numbers, also emboldened by labour code changes under Macron that have made hiring and firing easier.

INSEE said that not only did joblessness fall but the number of people in jobs rose in the fourth quarter to its highest level since comparable records began in 2003.

The share of people on permanent labour contracts reached 49.3 per cent. Along with the fourth quarter of 2018 when the same rate was reached, it was the highest since the third quarter of 2009.

The rate has risen since Macron’s reform of the labour code, which economists say is because employers are less uneasy than in the past about putting people on permanent contracts that previously made it difficult to get rid of workers if business soured.  The French economic growth is set to bounce in the first quarter of the year after slumping at the end of 2019, when transport strikes reduced activity, the central bank estimated on Monday.

The Bank of France forecast first-quarter growth of 0.3 per cent from the previous three months, when the euro zone’s second-biggest economy contracted 0.1 per cent.

The slump caught most economists and the Bank of France off guard - the central bank had forecast 0.2 per cent growth in the fourth quarter - as more than a month of transport strikes over pension reform hit factories’ supply lines.

Companies had little choice but to run down inventories rather than produce more goods, Bank of France Governor Francois Villeroy de Galhau said in remarks from his office.

“Our analysis is that this is a temporary hiccup and France should return to its quarterly cruising speed of about 0.3 per cent over the course of 2020,” Villeroy said in comments from his office.

Supporting that view, the French economy was seen benefiting from job and income growth while corporate investment was also firm, he added.

The Bank of France offered its latest growth forecast in its monthly business climate survey, which showed that sentiment in the manufacturing industry was stable in January from December at 96 points.

Manufacturers reported production had fallen last month as the strikes ground on, particularly in the aeronautics, car-making and electrical equipment sectors, which all rely on complex supply lines.

However, order books were stable and business leaders expected a return to trend growth this month, the central bank said.

Meanwhile, in the larger services sector, activity picked up from December, although survey panellists said they expected business to slow this month.

The Bank of France business indicators for January show economic growth resuming the pace it set for most of 2019, until December when prolonged protests over pension reform disrupted supply chains and depressed tourism and transport sectors. The economy, which shrank 0.1 per cent in the last three months of the year, is forecast to grow 0.3 per cent this quarter. Bank of France Governor Francois Villeroy de Galhau on Friday called the fourth-quarter performance a “temporary hiccup.” 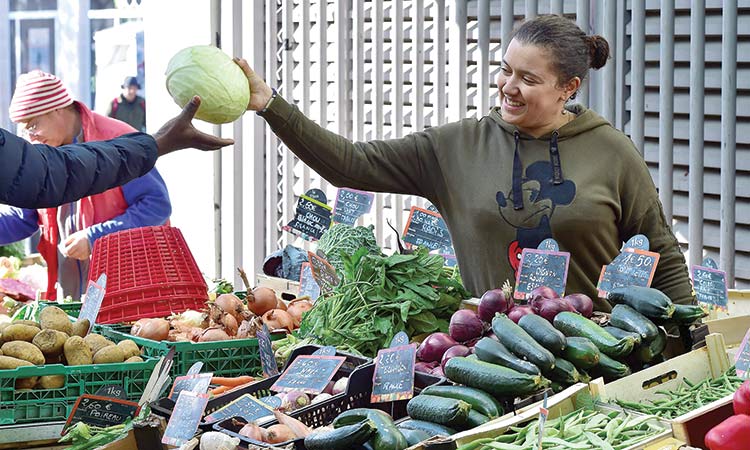