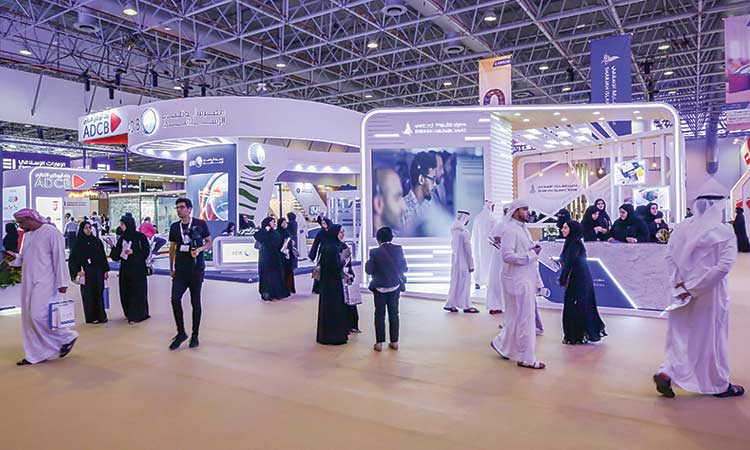 Over the past 22 years, the Career Fair has become a perfect platform for job-seekers.

The 22nd edition of the National Career Exhibition 2020 concluded on strong note at the Expo Centre Sharjah. The Career Fair was held under the patronage of His Highness Sheikh Dr Sultan Bin Mohammed Al Qasimi,  Supreme Council Member and Ruler of Sharjah, and organised by the Expo Centre Sharjah in cooperation with the Emirates Institute for Banking and Financial Studies (EIBFS) and Directorate of Sharjah Human Resources (DHR), with the support of the Sharjah Chamber of Commerce and Industry, SCCI.

With the participation of more than 50 institutions representing; banks, ministries, government departments, the armed forces, investment companies, private institutions, insurance and exchange companies, among others, the three-day event saw a remarkable turnout by Emirati national job seekers from secondary schools and university students to learn more about numerous job opportunities provided for young citizens, in addition to workshops and training programs that attracted young Emirati cadres to help them secure appropriate job opportunities, pursue their career development path in the future, and enhance their skills.

“The patronage of His Highness Sheikh Dr. Sultan bin Mohamed Al Qasimi for the 22nd National Career Exhibition affirms the keenness of our wise leadership on caring about citizens and providing them with enormous opportunities for education, rehabilitation, training, as well as encouraging local departments institutions and companies to attract male and female citizens, to join their institutions,” said HE Saif Mohammed Al Midfa, CEO, Expo Centre Sharjah.

“Over the past 22 years, the Career Fair has become a perfect platform for securing the needs of government and private agencies from ambitious national cadres, so that they can raise their targeted Emiratization rates and effectively contribute to supporting the efforts of the wise leadership in promoting Emiratization in the public and private sectors, as one of the most eminent national priorities,” added Al Midfa.

He pointed out that many of the parties participating in the exhibition received a lot of employment requests, something which reflects the success of this event in gaining the confidence of job seekers.

The 22nd National Career Exhibition witnessed the participation of the Ministry of Health and Prevention (MoHAP), through the Masar Program, which is an integrated program aimed at attracting secondary school graduates by enrolling several of medical specialties.

The Ministry of Community Development, in turn, focused on offering a set of vacancies to employ people of determination and showcasing a relevant number of rehabilitative and training programs, as part of the ministry’s role in rehabilitating and training those with various disabilities.

The increase in profitability in 2019 was supported by a significant increase in production from the KRI, which added $40 million which  helped offset partly the impact of lower prices. In addition, during the year, the Company recognised earn out and deferred income entitlements which contributed positively to the bottom line.

Dr Patrick Allman-Ward, CEO of Dana Gas, said:   “Dana Gas registered strong performance metrics in 2019 underscoring its increasing financial resilience in what has been a challenging  year for the oil industry. Net profit from our normal operations nearly doubled to $115 million, supported by an increase in production from the Kurdistan Region of Iraq despite the drop in realised prices. The strong set of results are supportive of a dividend  payment, subject to necessary approvals.”

“Looking ahead, the company’s expansion plan in the KRI is on schedule, with delivery from the first gas train expected in 2022. This  will raise production to 650 MMscf/d from the current rate of circa 400 MMscf/d. Over 90% of Dana Gas’s proven reserves are located in the KRI, so we will continue our focus here as we look to delivering on this vast potential.”