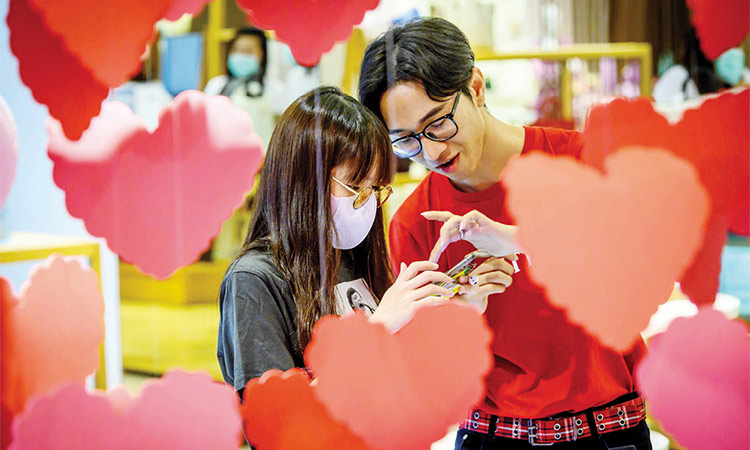 An employee talks to a woman, wearing a protective face mask, behind Saint Valentine’s decorations in a shopping mall in Bangkok on Tuesday. Agence France-Presse

Investors tuned in meanwhile to comments on the fallout by US Federal Reserve Chairman Jerome Powell in testimony to Congress on Tuesday and Wednesday.

The Fed is “closely monitoring the emergence of the coronavirus, which could lead to disruptions in China that spill over to the rest of the global economy,” Powell told US lawmakers.

In afternoon European trade, London’s stock market was up by almost 0.8 per cent, Frankfurt added 1.0 per cent and Paris was nearly 0.5 per cent higher.

As trading got underway in New York, the Dow Jones index rose 0.2 per cent.

The positive mood followed Monday’s rallies on Wall Street, where the S&P 500 and the tech-heavy Nasdaq hit fresh records on easing global worries over the coronavirus.

“European equities have continued the rebound begun yesterday in the US,” said IG analyst Chris Beauchamp.

“But... investors have yet to see an end in sight for the crisis in China and with other assets like oil so far refusing to respond in bullish fashion some will worry that equities are beginning to run out of road in the short-term.

“For now, practically the only data outside of virus infections that matters is China’s economic growth.” All eyes are on China as the world’s second-largest economy sputters back to life from a forced extension to the Lunar New Year holiday because of the outbreak, which has killed more than 1,000 people and disrupted major global supply chains.

After a nervous start to the week that saw Asian bourses plunge, most bounced back.

Hong Kong closed up 1.3 per cent, while mainland China’s benchmark Shanghai Composite Index was 0.4 per cent higher. Tokyo was closed for a public holiday.

The 2019-nCoV virus, which emerged in central China, has spooked equity and oil markets for weeks as it spread to more than two dozen countries.

More than 42,000 infections have been confirmed so far in mainland China and President Xi Jinping has described the situation in Hubei, the outbreak epicentre, as “still very grave”.

Chinese authorities are expected to unveil policy interventions to ease the economic hit from the virus, analysts said, which could boost market confidence.

“While... uncertainties remain around nCoV, one sure thing you can probably count on is that the mother of all stimulus measures will get laid down by the (Chinese central bank),” wrote Stephen Innes, chief market strategist for Asia-Pacific at AxiCorp.

A number of earnings reports are also expected this week, including from companies that could suffer a coronavirus hit to their results.

Chinese tech giant Alibaba, Japanese automaker Nissan and MGM Resorts are among the firms scheduled to announce results this week.

China, the world’s largest importer and consumer of oil, was already battling an economic slowdown when the coronavirus emerged.

But main oil contracts rebounded on Tuesday. Brent Crude was up 2.6 per cent while West Texas Intermediate rose by 2.2 per cent.

“Equities are recovering and the Chinese economy is trying to come back to normal... so it’s not surprising to see risk-averse investments like gold coming under pressure,” said Commerzbank analyst Eugen Weinberg.

With expectations of virus risks diminishing, “the impact to the Chinese economy and to some extent the world economy is likely to be only temporary,” he said.

China’s virus epidemic may peak in February and then plateau before easing, the government’s top medical adviser on the outbreak said.

The virus in the world’s second-largest economy has killed more than 1,000 so far and threatened the country’s economic growth as companies struggled to return to work after an extended Lunar New Year holiday.

Further weighing on gold, the dollar rose to its highest since early October against a basket of rivals, making assets priced in the US unit more expensive for holders of other currencies.

Meanwhile, gold in euros eased from a record peak of 1,444.76 euros per ounce hit in the previous session.

“We’ve this ad-hoc, completely unexpected (virus) factor driving demand for gold, but ultimately the growth prospects are being revised down (and) central banks are still continuing to ease their monetary policy, so the drivers for higher gold prices are there,” said SP Angel analyst Sergey Raevskiy.

Market participants were focused on Federal Reserve Chair Jerome Powell’s testimony before Congress, after two Fed policymakers played down the impact of the virus on the domestic economy.