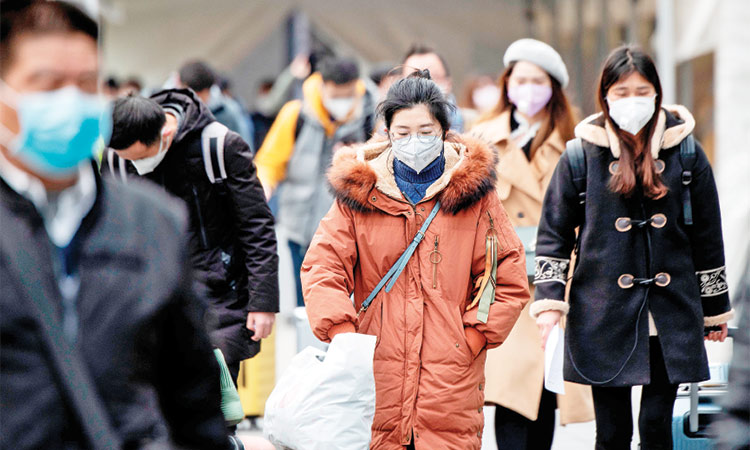 “The deepening health crisis is chipping away at market confidence.

“In London, stocks that are connected to China are under pressure. Mining, energy as well as travel stocks are in the red.” The virus has killed more than 900 people, infected more than 40,000 across mainland China and spread to more than two dozen countries in what is now considered a global health emergency.

It has also disrupted major supply chains for items such as food, household goods, and car and electronics parts.

In Asia, Tokyo’s benchmark Nikkei 225 index closed 0.6 per cent down, while Hong Kong pared some losses, ending the day 0.6 per cent lower after tanking 1.1 per cent at the open.

Shanghai bucked the trend with a 0.5 per cent gain at the close.

Investors worldwide have been watching with concern as China, the world’s second-largest economy, battles the novel coronavirus, which emerged at the end of last year in the central city of Wuhan.

The domestic impact was reflected in China’s inflation figures released on Monday, which showed the highest rise in consumer prices in more than eight years, with food prices spiking more than 20 per cent.

It has also disrupted the supply chains of major global firms such as Apple supplier Foxconn and auto giant Toyota. Key production facilities across China have been temporarily closed as authorities impose lockdowns and quarantine measures.

The contract for Brent crude was 1.1 per cent lower in afternoon exchanges, while West Texas Intermediate showed a decline of 0.7 per cent on Monday.

Separately, cryptocurrency bitcoin rallied to stand above $10,000 for the first time since September, though analysts did not attribute the move to any one factor in particular.

Latam assets dip on coronavirus fears; Brazil’s real hits new low By Shreyashi Sanyal Feb 10 (Reuters) - Latin American stocks and currencies were flat on Monday, on little demand for riskier assets in the face of a rising death toll from the coronavirus outbreak in China, while Brazil’s real hit a fresh all-time low. Risk assets across the region have been hit by worries of a slowdown caused by the epidemic in China, which is a major export destination for Latin American goods. “Investors are quite worried about the overly negative impact of the coronavirus on the global economy,” said Peter Cardillo, chief market economist at Spartan Capital Securities in New York.

On Sunday, 97 more fatalities were recorded - the largest number in a single day since the virus was detected in the Chinese city of Wuhan in December. The death toll from the virus has risen to 908 so far. MSCI’s index for Latin American currencies fell 0.3%, with the Brazilian real weakening 0.1% to 4.3274 per dollar. The currency of South America’s biggest economy logged its sixth weekly drop on Friday, with traders testing the central bank’s resolve not to intervene in the market to arrest its decline. Also weighing on emerging market currencies was a stronger dollar. The greenback hit a four-month high against the euro on Monday, boosted by higher safe-haven demand and a bullish outlook for the US economy. The Colombian peso eased as prices of oil, the country’s main export, fell on weaker Chinese demand. In Argentina, its new government heads into do-or-die talks this week with its biggest creditor, the International Monetary Fund, seeking a deal to postpone debt payments while honoring a promise to voters to not go along with painful budget cuts. 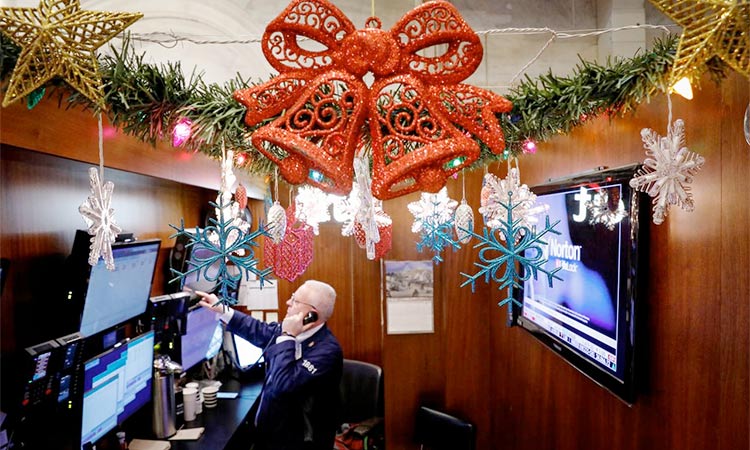 World stock markets wobble as traders wind down for Christmas

World stocks stalled near record highs and currency markets were little changed on Monday as trading dwindled before the Christmas holiday and investors took profit on gains made this month.