SCCI a key driver in enhancing the competitiveness of Sharjah - GulfToday

SCCI a key driver in enhancing the competitiveness of Sharjah 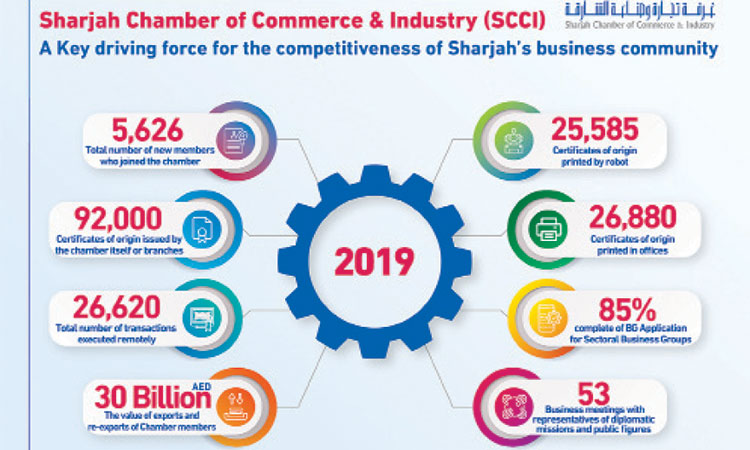 Staff Reporter, Gulf Today
The recently released data by the Sharjah Chamber of Commerce & Industry (SCCI), showed that the number of the new memberships of the SCCI has remarkably increased in 2019, reaching 5626 members.

While the total number of memberships movement in the main branch and other branches of the SCCI in Al Dhaid, Khor Fakkan, Dibba, and Kalba reached 58,984 members.

Abdullah Sultan Al Owais, Chairman, SCCI, said: “The year 2019 had an impressive record of achievements, where a number of important meetings were held in many countries around the world and with government institutions and representatives of the private sector and businessmen, as well as meetings with representatives of diplomatic missions and official figures, amounting to 53 missions.”

Also, 6 trade and economic forums were organised with various countries worldwide, as well as 19 internal and external participations organised by the SCCI’s Sharjah Exports Development Center.

“The value of exports and re-exports which reached Dhs30 billion in 2019 and the issuance of nearly 92,000 certificates of origin reflects the strength of the Sharjah economy and the vital role of the SCCI in supporting domestic product through its initiatives and its keenness to develop sectors and raise its productivity and investments,” he added.

Mohammad Ahmed Amin Al-Awadi, SCCI’s Director-General, said: “The efforts of the SCCI and its partners working as teamwork under the umbrella of Sharjah Government and its strategy have led to enhancing the participation of various economic activities, through a bundle of initiatives and events launched by the SCCI in 2019. The SCCI has managed to develop its economic relations and cooperation and promote trade and investment exchange with dozens of officials, countries, organizations, ambassadors, consuls, and heads of chambers of commerce and economic institutions worldwide.” Among the most prominent missions organised by the SCCI, last year were its trade missions to Uganda, Kenya, Moscow and St. Petersburg, while it received delegations from Brazil, Australia, Poland, Korea, Ronda, Egypt, Morocco, Tajikistan, India, and others.

On a similar note, the SCCI organised a number of successful festivals and shows in 2019 in various regions of the emirate of Sharjah, most notably were “Sharjah Summer Promotions”, “Sharjah Spring Promotions”, and the 4th edition of Al Dhaid Dates Festival.

The Business Sectoral Groups operating under the SCCI umbrella participated and organised more than 26 diverse activities during 2019, based on knowledge, development, and support of the economic activity and local products in Sharjah to penetrate international markets.

The application of the Business Sectoral Groups “BG” has been completed by 85%, which is used to ease communication between members of those groups, in terms of checking minutes of the meetings, various events, following up on recommendations, with the aim of converting the Groups’ procedures entirely into 100% electronic.

As for the knowledge management, the SCCI, in 2019, has presented a study of the market growth index, to measure the level of satisfaction through 3 studies focused on the SCCI’s employees, society and partners, where 65 questionnaires were distributed to evaluate the SCCI services and activities.

in the same context, 3 events were held to spread culture and knowledge, in addition to organizing 5 field visits to multiple parties to learn about best practices and discuss ways of cooperation, as well as holding 5 meetings with educational institutions to provide the SCCI with the necessary research and market studies.

As part of the SCCI’s efforts to motivate young people to establish their own SME projects to enhance the economic benefits and achieve sustainable development in Sharjah, the SCCI launched “Tijarah 101”, the first of its kind centre locally and regionally to empower entrepreneurs from the young people, by developing and improving the business environment in the small and medium enterprises, raising production efficiency, and promoting and marketing entrepreneurial projects.

The SCCI’s Small & Medium Enterprises Center took part in 10 various activities, including the SME Expo 2019 in Abu Dhabi, the Second Forum for Arab Entrepreneurs, Sharjah Entrepreneurship Festival 2019, in addition to organizing a workshop on the franchise industry and “Tawasul Forum” in cooperation with the Khalifa Fund to introduce the products and services provided by the Fund.

With respect to the member services, the SCCI has stepped up its services for the members and streamlined the membership procedure, adopting a smart trend. This led to reducing the steps, time, and effort needed for obtaining the Chamber membership.

The SCCI has also achieved the third and fourth phases of smart connectivity with the Sharjah Economic Development Department, in additional to launching a series of initiatives, such as Burak Initiative (a robot to print the certificate of origin), printing the certificates of origin from companies ’offices, the remote work initiative, and the distinguished service initiative by entering information instead of the customer, as well as the continuation of work by the “Contact – We Reach “initiative.