Renault and Nissan may improve tie-up without ownership change - GulfToday

Renault and Nissan may improve tie-up without ownership change 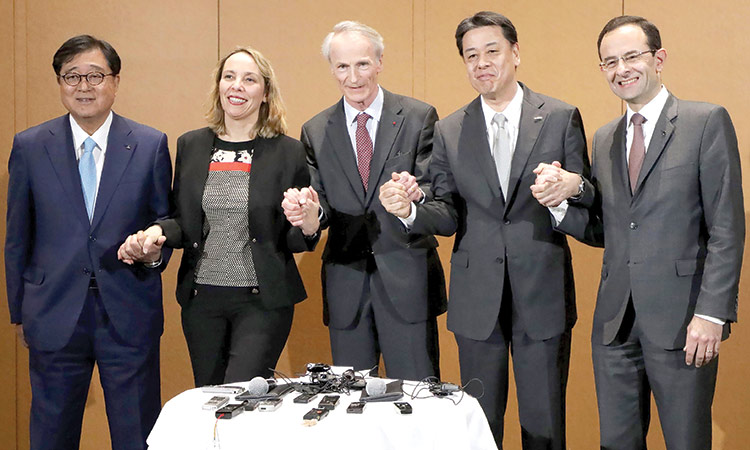 Officials of the Renault-Nissan-Mitsubishi alliance at a press meet in Yokohama, Japan. Agence France-Presse

Renault and Nissan can improve their alliance without altering their ownership structure, the chairman of the Franco-Japanese partnership said, rolling back a previous push towards a full-blown merger that rankled Nissan.

The comments from Jean-Dominique Senard point to an emphasis on more cooperation and operational efficiency as the automakers and junior partner Mitsubishi Motors Corporation strive to rebuild profits, which have slumped in the wake of former chairman Carlos Ghosn’s arrest in 2018.

Renault and Nissan have struggled to repair a relationship badly strained after the arrest of Ghosn, who fled Japan to his childhood home of Lebanon at the end of last year. He has been charged with financial misconduct, which he denies.

“We all share a sense of urgency,” Senard told reporters in Yokohama, after he and the heads of the three automakers met. He said there was “no other option” but to change, but added reforms could be made without a shift in the capital structure. “The priority as clearly stated was to increase significantly the efficiency of the alliance,” he said.

Renault SA, which is part-owned by the French state, owns 43% of Nissan Motor Co, while the Japanese firm has 15% of the French carmaker, with no voting rights - a structure that has caused friction in Japan, given Nissan is the larger of the two.

Renault has previously indicated a desire to move towards a full merger, something Ghosn is said to have championed and which Nissan has strongly opposed.

Nissan CEO Makoto Uchida told reporters that in order to leverage their respective strengths, Nissan would take an operational lead in China, where it leads its partners in sales, Renault on its home turf in Europe and Mitsubishi in southeast Asia, an area it dominates.

A similar model will be taken for engineering, where one company will lead in developing a key technology that would then be shared among the partners, the companies said in a statement.

Fuel economy credits would be pooled by the three in Europe, they added. The three companies, which together sold nearly 11 million vehicles in 2018, will announce revised mid-term plans by May, Uchida said.

The automakers need to improve profitability to compete with global rivals, which are investing heavily to develop electric vehicles, self-driving cars and other new technologies that are transforming the industry.

Reuters reported this week that Nissan was set to eliminate at least 4,300 white-collar jobs and shut two manufacturing sites as part of broader plans to add at least 480 billion yen ($4.4 billion) to its bottom line by 2023.

“That will be around 10 to 15 per cent of the market and will require 5 billion euros ($5.5 billion) in investments. It is an important bet,” Pouyanne said at the launch of a pilot line for the project in southwest France.

The project, through a joint venture of both companies known as Automotive Cell Company (ACC), is backed by the French and German governments and the European Union, as the bloc races to build a competitive battery sector to challenge Asian dominance.

In December, the European Commission approved 3.2 billion euros of state aid from seven countries for research and development projects in the battery sector, including the Total-PSA project.

The project will receive 1.3 billion euros in public funding during the development phase, Total said.

“We need to move fast. Our clients are asking for electric batteries because Europe is demanding it. We have to launch the industrial phase to produce the batteries by 2023/2024 in France and Germany with Opel,” Pouyanne added.

The first phase will trigger the investment decision for a large-scale production plant of 8 gigawatt hour (GWh) initially, which will be ramped up to 24 GWh later.

A second production plant of equal capacity will be constructed in Germany, taking the combined capacity to 48 GWh by 2030, Total said in a statement.

The battery technology will be provided by Total’s battery subsidiary Saft. It said the high performance lithium-ion batteries will offer the highest level of energy performance, both in terms of range and charging time, and a lower carbon footprint than the competition.

“I am convinced that this project, with our partner Total/Saft, will create a benchmark player in automotive battery cell development and production in Europe,” Carlos Tavares, PSA group chairman, said in the statement.