UAE, US experience continuous growth in trade and investment - GulfToday 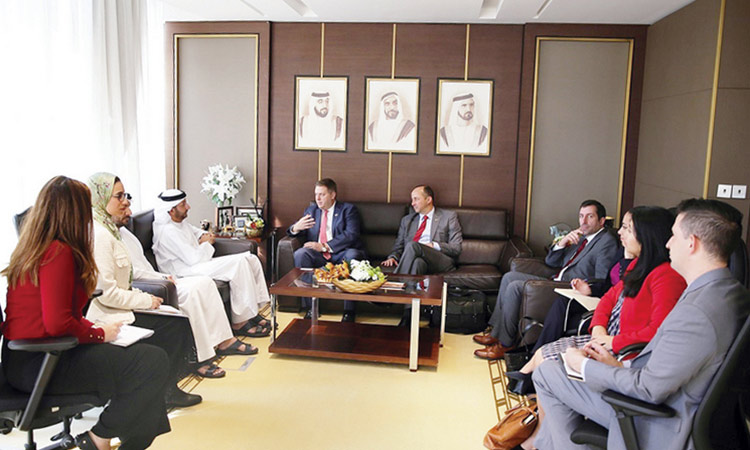 Business Bureau, Gulf Today
Abdullah Bin Ahmed Al Saleh, Undersecretary of the Ministry of Economy for Foreign Trade Affairs, held a meeting recently with Ian Steff, Assistant Secretary for Global Markets and Director General of the United States and Foreign Commercial Service and his accompanying delegation at the Ministry’s headquarters in Abu Dhabi.

Al Saleh underlined the economic, investment and commercial relations between the UAE and the USA as reflected by the continuous growth of trade exchange figures and investment flows in both directions, which serve mutual interests and benefit both countries.

Al Saleh further pointed out the importance of enhancing cooperation in the field of investment in light of key investment opportunities that are emerging in both countries, noting in this regard that the UAE’s investments in the US are the largest among the Arab countries.

He also emphasized the importance of intensifying the exchange of visits by both countries’ businessmen and investors to discuss and exchange views on investments available in the US and UAE markets.

During the meeting, Al Saleh further elaborated on the ideal investment environment that the UAE provides to investors, in addition to highlighting promising investment opportunities in the country’s market. The two sides also discussed joint cooperation in strengthening intellectual property protection; combating commercial fraud and discussed fees imposed by the United States on aluminum and iron imports.

The arrangements for the participation of the UAE trade delegation headed by  Eng. Sultan bin Saeed Al Mansoori, UAE Minister of Economy, at ‘Select USA Investment Summit 2020’ conference in the American capital in June 2020, and their  visit to a number of American states was also discussed during the meeting.

Ian Steff hailed the growing economic, trade and investment relations between the UAE and the USA and is a candidate for further growth in light of the mutual desire and the existence of more opportunities for cooperation in various sectors and fields.

The US official praised the country’s business environment and its attractive investment climate, encouraging the American business community to expand its activities in the region.

Meanwhile, the United Arab Emirates (UAE) ranked first in the Arab world and 21st globally on the Global Labour Resilience Index 2020, which was issued in Davos, Switzerland during a special session held on the sidelines of the 50th summit meeting of the World Economic Forum in the presence of H.E. Eng. Sultan bin Saeed Al Mansoori, UAE Minister of Economy, and officials and economic leaders from more than 30 countries.

Following the release of the report, the UAE has officially climbed 12 places on the index’s overall rating over the past five years, up from 33 in 2015, and it is the only GCC country to rank among the top 30 countries the year. Bahrain is the nearest Gulf nation to the UAE and ranked 15 places below in 36th for the year.

The Global Labor Resilience Index measures the level of future unemployment risks that countries face based on geographical disparities, structural shifts, policy and technology changes and their impact on the labor market; with the report for the current year ranking 145 countries and economies on the flexibility of their labor markets in light of the technological transformation.

The index was led by Whiteshield Partners, a London-based consultancy firm that specializes in global public policy and strategy, in cooperation with the Oxford University Saïd Business School, ManpowerGroup, and the UK Institute for the Future of Work.

During the launching session of the index on the sidelines of the Davos 2020 meetings, Al Mansoori said that the UAE has followed a development path based on the vision and directions of the nation’s wise leadership. He explained the country has achieved continuous development in economic policies and business sector strategies, increased the resilience of the labor market and raised its ability to adapt to economic and social changes and global transformations as a result of technological and digital revolution over the past ten years, and occupied a leading position at the regional level in this vital path that charts the future economies of the next stage.

Al Mansoori added: “The UAE’s achievements on the Global Labour Resilience Index 2020 is a testament to the national economy as it has made great strides in enhancing its economic potential in the digital age and improving its ability to confront the widespread economic changes at international level.” 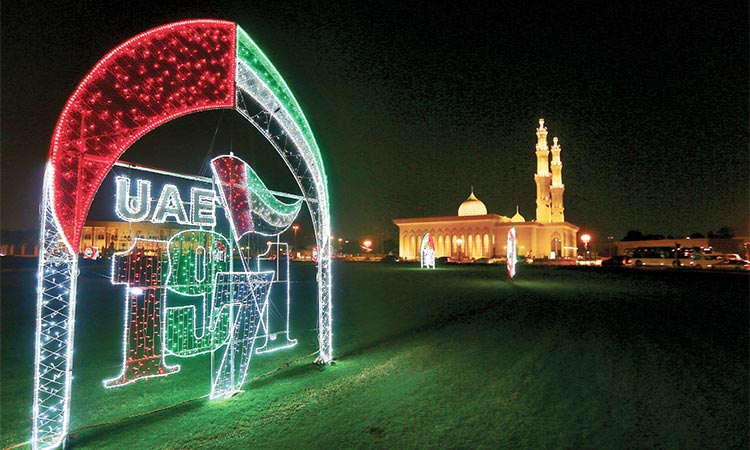 Today the UAE is celebrating its 48th National Day. Bold decisions and an ambitious economic vision have boosted the competitiveness landscape of the nation, transforming the UAE into a key global investment destination. 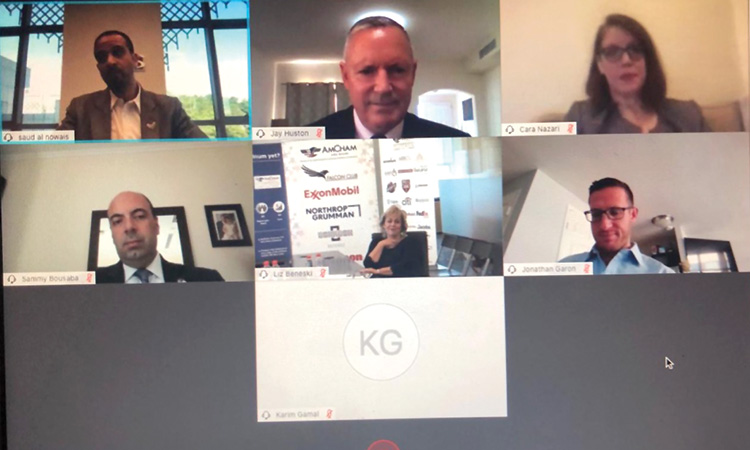 The Embassy of the United Arab Emirates in Washington, DC presented an exclusive webinar titled “View from the mission in DC, US-UAE Commercial Landscape, Updates Related to COVID-19” to the collective leadership and members of the AmCham Dubai and AmCham Abu Dhabi. 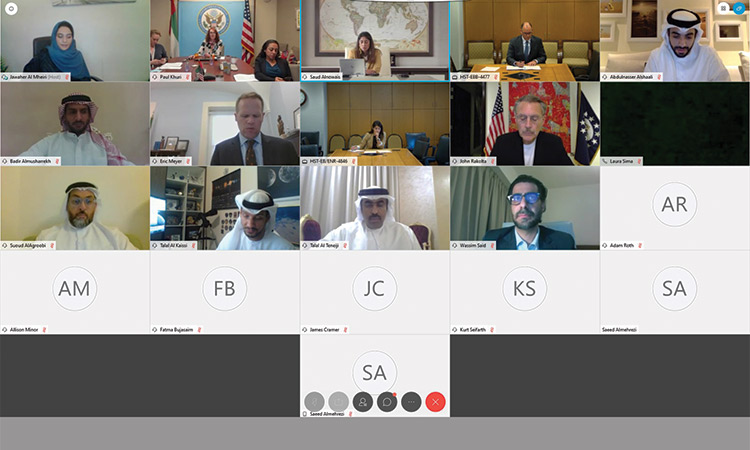 UAE and US reaffirm desire to expand economic opportunities

The United Arab Emirates and the United States held their seventh Economic Policy Dialogue via videoconference on June 18. The dialogue was co-chaired by the UAE Ministry of Foreign Affairs and International Cooperation’s Assistant Minister for Economic and Trade Affairs, 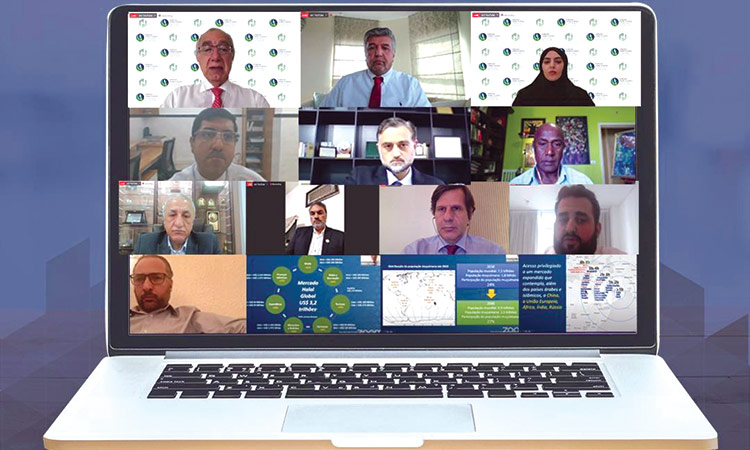 Dubai Airport Freezone Authority (Dafza) has signed a Memorandum of Understanding (MoU) with the Arab-Brazilian Chamber of Commerce (CCAB) with the aim of on boarding the Chamber as an Halal Trade and Marketing Center (HTMC) service partner,