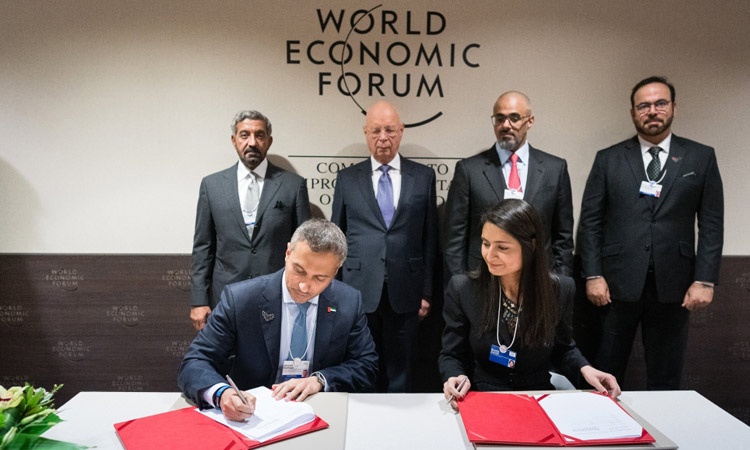 The UAE government has announced support for the plan and programme launched by the World Economic Forum (WEF) in Davos to develop better skills, jobs, and education for a billion people by 2030 to qualify them for the labour market.

Sheikh Khalid Bin Mohamed Bin Zayed Al Nahyan, Member of the Abu Dhabi Executive Council and Chairman of the Abu Dhabi Executive Office; Sheikh Ahmed Bin Saeed Al Maktoum, Chairman of Dubai Civil Aviation Authority and Chairman and Chief Executive of Emirates Airline and Group; Mohammad Bin Abdullah Al Gergawi, Minister of Cabinet Affairs and The Future, and several officials from the UAE delegation participating in the event attended the signing of a cooperation agreement between the UAE and WEF as part of the WEF's agenda.

The UAE is one of the first countries to support the declared strategic goal, along with several other countries such as the United States, Denmark, and numerous major companies and international organisations.

Dr Ahmad Bin Abdullah Humaid Belhoul Al Falasi, Minister of State for Higher Education and Advanced Skills signed the agreement under which the UAE becomes an active member of the programme, which will extend for the next ten years, and aims to provide better skills and education for a billion people around the world and enhance the quality of life for generations to come, which is in line with the slogan of the current World Economic Forum, Davos 2020 "Stakeholders for a Cohesive and Sustainable World."

Dr Al Falasi said, "It is a pleasure to announce the support of international efforts to provide and spread education, skills and appropriate environment for them and through the agreement, we seek to find appropriate solutions and invest in human capital, which is a major national priority for us in the UAE."

WEF Founder and Executive Chairman, Professor Klaus Schwab said, "The best way to create a more cohesive and more inclusive society is to provide job opportunities for all, and we here in Davos are working with our partners to create a global platform that will provide a billion people with the skills they need in the era of the Fourth Industrial Revolution, and as this is an important and pressing transformation, the least we have to do is move faster to renew and develop skills."

Focus on innovation keeps UAE ahead

One of the prime reasons for UAE’s success is its consistent encouragement for innovative ideas. Innovation is part of the pillar ‘United in Knowledge’ of Vision 2021 which focuses on innovative Emiratis building a competitive economy.

UAE a torch-bearer of youth empowerment

There is no doubt that where youth empowerment is concerned, the UAE has truly and definitively shown the way in spearheading it. The UAE Cabinet’s decision to select 33 young people to become members