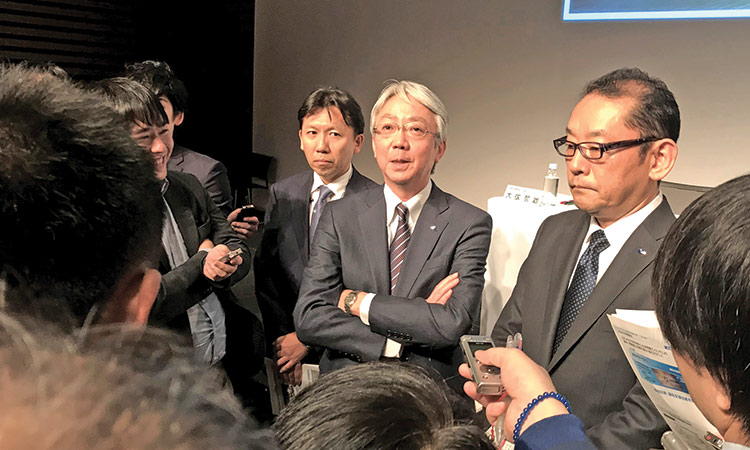 Tomomi Nakamura talks to the media at Subaru’s headquarters in Tokyo, Japan on Monday. Reuters

Japan’s Subaru Corp, long a laggard in electrification, plans to go greener with a target to get at least 40 per cent of its global sales from full-electric or hybrid vehicles by 2030.

Subaru set a target on Monday to sell only electric vehicles worldwide by the first half of the 2030s, in a move towards its long-term goal of a carbon-free society.

In the first half of the 2030s, the Japanese automaker plans to electrify every vehicle in its global lineup. In announcing the new campaign, Subaru also unveiled the first design study for the full-electric crossover it is co-developing with Toyota for sale before 2025.

The news comes as Subaru has strengthened capital ties with Toyota Motor Corp, in a trend of global automakers joining forces to slash development and manufacturing costs of new technology.

To supplement the mild hybrid and plug-in hybrid cars already in its lineup, Subaru plans to develop a so-called “strong hybrid” vehicle using Toyota technology and intended to debut later in the decade.

It is also developing an all-battery electric car with Toyota for release around the same time.

“It’s not only about reducing CO2 emissions. We need to further improve vehicle safety and the performance of our all-wheel drive.”

Subaru said that by 2030 at least 40 per cent of its cars sold worldwide will comprise battery electric vehicles or hybrids.

The Japanese automaker, which produces the Outback and Forester SUVs, is known for its horizontally placed boxer engines, along with its EyeSight autonomous driver assist and all-wheel-drive technologies.

Car manufacturers worldwide are scrambling to chase scale, manage costs and boost development of the self-driving cars, electric vehicles and new mobility services that are upending the industry.

“Subaru’s strong commitment and dedication towards car-manufacturing that we have cultivated throughout our history remain unchanged,” President Tomomi Nakamura added.

The full-sized EV mockup, shown during a technology briefing at Subaru’s global headquarters in Tokyo on Monday, is a low-slung ride with a raked rear window, elongated cabin, digital sideview mirrors and short front and rear overhangs.

The front fascia is aggressively creased, while the wheel wells get heavy black cladding that lends the tires a rugged, oversized look.

Subaru will achieve the electrification targets by introducing the EV along with a range of what it calls “strong hybrids” based on Toyota’s system, Chief Technology Officer Testuo Onuki said.

The goals are part of wider objectives to reduce the automaker’s carbon footprint, while improving the safety and drivability of Subaru vehicles. The move comes as Subaru races to adjust its all-wheel-drive lineup to surging demand for an onslaught of pricey next-generation technology, covering everything from electrification and autonomous driving to connectivity.

“In this era of a once-in-a-century change, we would like to explain what Subaru aims to become and what kind of technologies we are working on,” Nakamura said. “As a small carmaker, we need to think about how to enhance Subaru’s uniqueness so consumers differentiate us from others.”