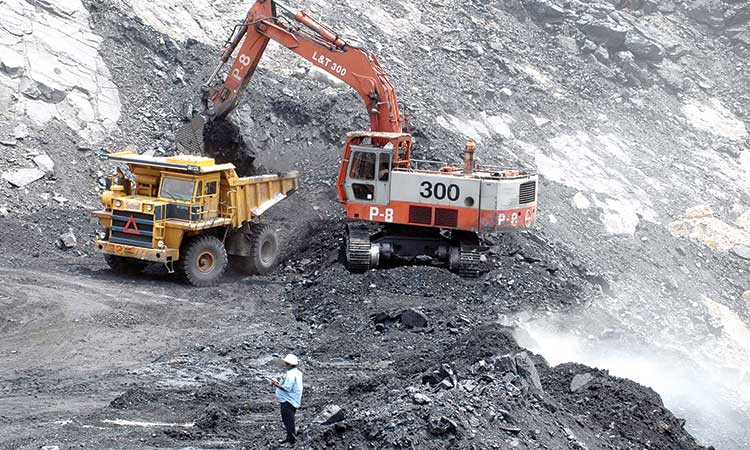 Indian workers use heavy machinery to shift a pile of coal at an open cast mine in Hyderabad, India. Agence France-Presse

The slowing in imports reflects wider weakness in the Indian economy, projected to expand by just 5 per cent in 2019/2020 fiscal year, the lowest pace in 11 years.

“A demand downfall across sectors has had a downward cascading effect on everything including coal imports,” said Puneet Gupta, founder of online coal marketplace Coalshastra.

Imports of thermal coal - used mainly for electricity generation - fell 10.7 per cent to 15.62 million tonnes in October. But imports for the 10 months to October were 12.6 per cent higher at 163.86 million tonnes, according to data from the Ministry of Coal.

India has embarked on liberalisation of its coal industry, promising to open up mining to private companies. But progress has been slow, meaning imports kept growing until August, after which the economic slowdown deepened and hit seaborne coal trade.

Worker strikes and the heaviest monsoon in 25 years were behind five straight months of production decline at state-run Coal India which produces over four-fifths of the country’s coal.

Indian coal-fired utilities, which account for over three-quarters of overall consumption, boosted imports of thermal coal by nearly a third during the first 10 months of 2019.

The Mundra plant run by Adani Power accounted for the lion’s share of the increase, with imports almost doubling to 14.7 million tonnes, or over a quarter of all thermal coal imports by Indian utilities in the Jan-Oct period.

Imports of coking coal - used in steelmaking - also fell during the months of August, September and October. Coking coal imports were little changed at 42.28 tonnes during the 10 months to October.

…… The country’s coal imports registered an increase of 4.4 per cent to 161.43 million tonnes (MT) in the April-November period of the ongoing fiscal.

This comes amid the Centre exuding hope that imports of the fossil fuel would be contained to 235 MT this financial year. India had imported 154.56 MT of coal in April-November 2018, according to a report by mjunction services.

Union minister Pralhad Joshi on Sunday said the Centre will stop the “substitutable import” of coal in the next three to four years and can go for auction of 100 fully explored blocks. The statement assumes significance in view of recent developments in the sector where the government recently brought an ordinance to amend laws to open up coal mining to firms other than those in the steel and power sectors, removing restrictions on end-use of the fuel.

Terming the promulgation of the ordinance as “one of the major reforms”, the coal minister in an interview to said that “whatever the substitutable shortfall is there...we want to achieve it in the coming three-four years. That may be around 2023-24. We want to stop the substitutable import of the coal”.

“In between also there were some other problems. CMSP Act, end-user restriction. So many things were there. All these things we have removed now,” the minister explained.

Stating that promulgation of the Ordinance has been welcomed by the sector, he said the government is seeking comments on draft rules for coal mines auction which is in the public domain.

“Now question is about framing rules and that we have kept it in public domain...We want to make it investor friendly... After this formation of rules and after all these things, we want to market in a such way in the world that now things have become easy...you come and do the business,” the minister added.