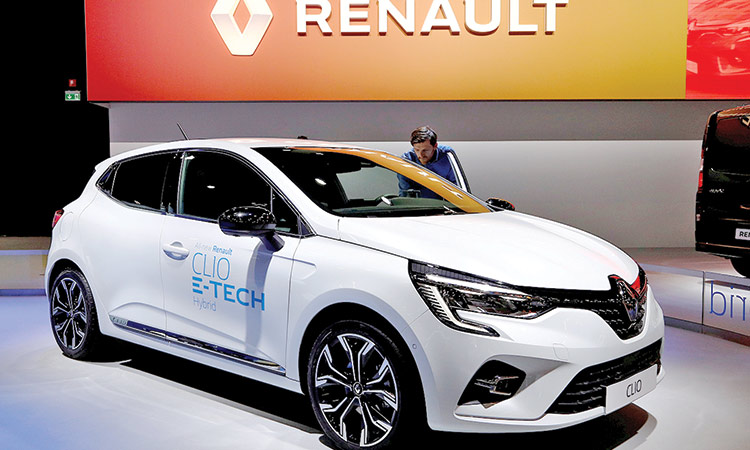 Renault has suffered since August 2018 from the closure of the Iranian market where the company sold had around 101,000 vehicles, which it was not able to do last year.

Renault’s Executive VP sales Olivier Murguet said at a press conference that the automotive market would slightly decline in Europe, Russia and China in 2020.

The company also expects growth in the market in Brazil and an upturn in Turkey this year.

“For the group, 2020 will mark a new stage in its electric offensive with the launch of Twingo Z.E. and the deployment of its new E-Tech hybrid and plug-in hybrid offer,” Renault said.

Murguet said the company was targeting 70% growth in its electric cars sales in 2020.

Renault Chairman Jean-Dominique Senard said there was a “real desire” within the top ranks of both companies for its alliance with Nissan to succeed, dismissing suggestions the partnership was on the rocks. Turmoil within the Franco-Japanese alliance, long dogged by internal rivalries, deepened following the November 2018 arrest in Tokyo of its architect and long-time boss Carlos Ghosn on charges of financial crimes, which he denies.

Attempts to restore calm were dealt a fresh blow by Ghosn’s dramatic flight from Japanese justice and a series of no-holds-barred allegations he has made from his refuge in Lebanon, including that he was the victim of a plot to oust him and that the alliance is now a “masquerade”.

Nissan has vigorously rejected Ghosn’s stance, while both the Japanese firm and Renault have tried to rubbish suggestions their two decades old partnership is falling apart.

“We have a board overseeing the alliance which is made up of people who are all extremely in favour of the alliance,” Renault Chairman Senard told a briefing with reporters.

“There is a common desire to associate our strategic plans and a real desire to make this alliance a success,” he added, dismissing a report that Nissan was examining scenarios for a possible future outside of the alliance as “fake news.”

The 66-year-old declined to comment on anything related to Ghosn, adding: “I only think about the future.”

Renault shares were down 2%, underperfoming the broader auto sector which was down on news that Washington has threatened to impose tariffs on European car imports due to Europe’s stance on Iran.

Analysts see Renault-Nissan’s cost-saving alliance as vital to both companies as the car industry battles a slowdown and huge investments in cleaner vehicles and automated driving, particularly as rivals PSA and Fiat Chrysler are merging to help meet these challenges.

Senard, who chairs the alliance’s operating board, said on Thursday that once the partnership has been rebooted, other firms might potentially want to join.

The executive, who used to run tyre maker Michelin, has become the de facto senior figure in Renault and Nissan’s alliance, though without Ghosn’s commander-in-chief aura, which had helped hold it together.

While that is partly deliberate - both parties are keen to avoid another strongman situation and created a four-member operating board to oversee the alliance - Senard will now have to show he can push through new joint projects.

He declined to give details of these beyond saying potential cost savings could be substantial, and that the alliance’s board would meet soon to decide on its industrial plan.

The meeting is scheduled for Jan.30, a source close to Renault said.

The firms are meanwhile finalising a management revamp, with Renault close to appointing a new CEO after ousting Ghosn-ally Thierry Bollore in October. A new CEO started at Nissan in December.

Luca de Meo, who recently stepped down as the head of Volkswagen’s Seat brand, is seen as the frontrunner for the Renault job, although a non-compete clause in his contract is proving a problem, sources have said.

Interim CEO Clotilde Delbos is also in the frame.

Senard said shaking up the shareholder structure in the alliance was not a priority for either side.

Renault, which is part-owned by the French state, has 43% of Nissan, while the Japanese firm has 15% of the French carmaker, with no voting rights attached - a structure that has caused friction.

Meanwhile, French carmaker PSA Group said on Thursday global sales fell 10% last year to 3.49 million units, compared with a record 3.88 million in 2018, as it suffered from declining volumes in China, the Middle East and Africa.

In its European home market, Paris-based PSA’s sales declined by 2.5% in 2019 to 3.11 million vehicles, with its Opel-Vauxhall brand suffering the steepest fall, down 6.4%.

According to figures published by the European Automobile Manufacturers Association (ACEA), PSA was outperformed by Volkswagen Group and Renault in the European passenger car market.

Fiat Chrysler Automobiles (FCA) was on the other hand hit by a 7.3% fall of its passenger cars sales in Europe. PSA and FCA said last month they had agreed on a binding merger in a $50 billion deal that will pave the way to the creation of the world’s fourth-largest car maker.

PSA’s French rival Renault is due to publish its 2019 global sales on Friday.

“2019 was a year of consolidation for Peugeot. The brand completely renewed its B-segment offering to support its sales growth in 2020,” PSA said in its statement, referring to its small passenger car line-up, adding “Citroen had the strongest growth among the top 12 best-selling brands in Europe”.

Sales volumes were also down 22.5% in a contracting Latin American market and 43.7% in the Middle East-Africa region - punished by the group’s forced withdrawal from Iran under threat of US sanctions. The company gave no sales forecasts for the current year.