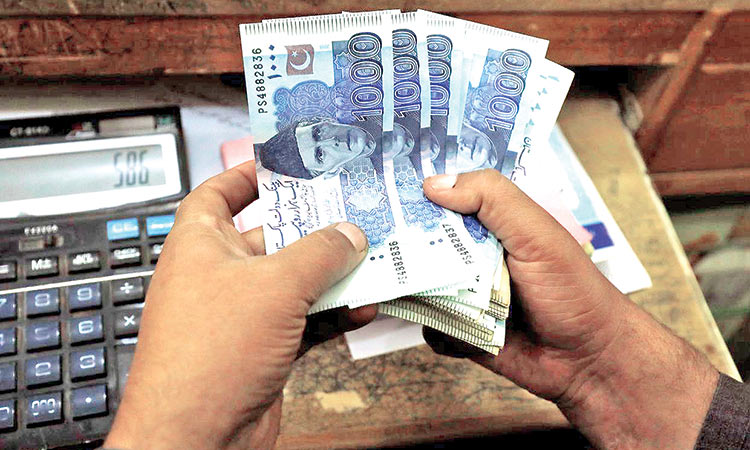 Speaking in the Senate during Question Hour, he said our fiscal deficit for the first quarter of current financial year remained within the target rather according to the IMF we over-performed in this area.

Hammad Azhar said the government took difficult decisions to save the country from default. He said we retired over ten billion dollars of debt in the first year which is the highest made by any government. He said foreign exchange reserves are also on upward trajectory.

The Minister said revenue collection has also witnessed growth during the first half of current fiscal year and efforts are afoot to enhance non-tax revenue. He said the private sector will be provided with an enabling environment to create job opportunities for the youth.

Hammad Azhar said the government has forecast to gradually reduce the debt to GDP ratio. For this purpose we will enhance our revenues and foreign exchange reserves besides cutting expenditures.

Minister for Parliamentary Affairs Azam Khan Swati told the House that the process has been started to get approved regulations to ensure safety standards in the vehicles.

Minister for Economic Affairs Hammad Azhar said that commerce and finance ministries and the State Bank of Pakistan are in consultation to revive the sick industrial units. He pointed out that the flawed policies of previous governments adversely damaged these units. He said different proposals including restructuring of their loans are being considered to revive them and enhance the exports.

Speaking on a motion, the Senators stressed the need for women emancipation and empowerment. They said the political parties need to work together for this purpose. They said the provincial governments should also come up with legislation to ensure women rights in inheritance as has been done in the federal capital. They also deplored the incidents of violence against women and demanded those involved in such incidents should be brought to justice.

Meanwhile the Ministry of Finance of Pakistan said that the government’s extensive measures have helped the economy move progressively along the adjustment path and stabilisation process and economic recovery is expected towards the end of financial year 2020.

“The government is focused on bringing improvement in the key sector growth through inclusive growth in agriculture, industrial and services sectors,” said a statement by the Finance Division in response to certain news reports carried in a section of the regarding downward revision of growth by the World Bank.

The government is cognizant of challenges and stringently focused on resolving them particularly, reducing inflation, creating job opportunities and achieving high growth rate.

Keeping in view the positive developments on major economic indicators, we expect that the economy will likely to achieve better growth prospects as against the projections of the World Bank. The World Bank in its report ‘2020 Global Economic Prospects’ had forecasted Pakistan’s current year growth rate at 2.4 per cent before touching 3 per cent next fiscal year and 3.9 per cent in the fiscal year 2022.

The bank’s report had also mentioned that the growth had decelerated an estimated 3.3 per cent in FY2018-19, reflecting a broad-based weakening in domestic demand.  In addition, the report had described that significant depreciation of the Pakistani rupee resulted in inflationary pressures, monetary policy tightening restricted access to credit, curtailing public investment to deal with large twin deficits and budget deficit rose more sharply than expected.

For growth in farming sector, the target production of wheat is 27 million tonnes given by FCA in last meeting held in October. In addition to uplift agriculture sector “National Agriculture Emergency Programme” in coordination with all provinces has been introduced and approved 13 mega projects at the cost of Rs287 billion. Agriculture credit disbursement target for CFY20 has been set at Rs1,350 billion.

Agriculture credit disbursement increased by 20 per cent to Rs482 billion during Jul-November, FY2020 against Rs402 billion last year. It may be pointed out that during FY2019, the slowdown in economy was largely attributed to various policy measures to manage the twin deficit crisis. Consequently, these measures helped to contain demand pressures and contributed to import compression. However, the outcomes of these measures were realized on the industrial sector. Particularly LSM sector witnessed a negative growth.