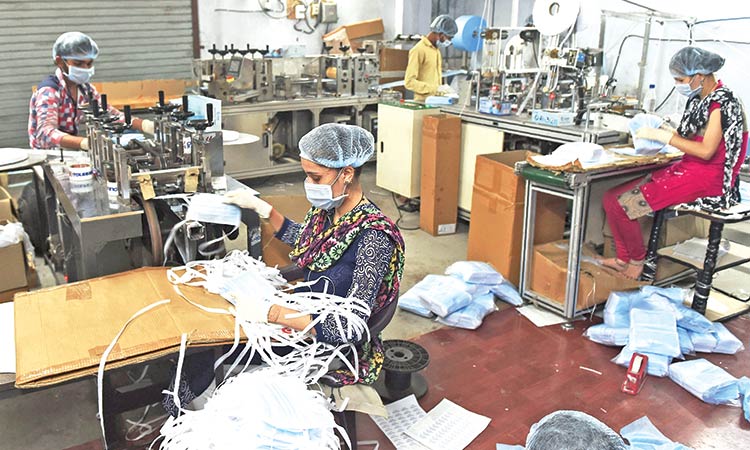 The projection in the UN’s World Economic Situation and Prospects report released on Friday are higher than the 5 per cent made by the World Bank earlier this month.

The UN growth estimate for the current fiscal is drastically lower than the forecast of 7.6 per cent made in last year’s report in January and 7 per cent in the May update.

United Nations suggested that India should do better in the labour and green energy sectors.

The labour markets are not performing optimally with high levels of informality and gender barriers that effectively limit the participation of women.

The head of UN’s Global Economic Monitoring Branch, Dawn Holland, told IANS that although there has been a steep decline in growth, India was still one of the high performers globally.

She said that it was expected to improve its growth rate in the coming year because of the steps being taken.

According to the report, only China has a higher growth rate than India among the world’s large economies with a 6 per cent forecast for the current calendar year.

Briefing the media about the report, UN’s Chief Economist Elliott Harris presented a dire picture of the global economy last year when the world’s gross product growth rate dropped to 2.3 per cent, the lowest in a decade.

He said that rising tariffs and rapid shift in trade policies were responsible for the lower growth rate with the United States-China trade disputes playing a significant part.

In South Asia, Bangladesh is forecast grow by 8.1 per cent this fiscal year and 7.8 in the next, while Pakistan’s growth rate estimated at 3.3 per cent for 2019-20 is projected to slip to 2.1 per cent next year.

Associate Economics Affairs Officer Julian Slotman, the UN’s pointperson for Indian and South Asia, said in an interview to IANS that “a huge decline in investment and in private consumption” were the major reasons for the economic slowdown in India.

External factors have also contributed to the lower growth, he said.

“Globally we have seen a large impact of trade tensions, particularly between the US and China, but also other major economies, that have affected growth rates across the globe and also, of course, India which is a very open economy, that has a lot to gain from international trade,” he said.

In India, he said, as the government has responded to those issues by announcing some stimulus steps, which we do expect to improve economic growth in 2020 going forward. However, fiscal stimulus in itself will not be enough.”

He mentioned two areas where India could do better: Labour and Green Energy.

“The labour markets are not performing optimally with high levels of informality (and) gender barriers that effectively limit the participation of women,” he said.

In addition a high number of youth are neither working nor undergoing training, he said.

“This is something the government will have address, to both improve long-term economic growth and to reach (the UN’s) sustainable development goals,” he said.

Access to clean and affordable energy is another major area for improvement, both to improve growth in the long-term and to reach green energy goals for sustainable development, Slotman said.

Moreover, “India being an importer of energy has much to gain from improving access to clean and affordable energy” even if it has to put up with high upfront costs, he added.

Another barometer of economic growth in India and the world will be coming out on Monday when the International Monetary Fund releases its World Economic Outlook report.

Meanwhile, Indian Commerce Minister Piyush Goyal on Thursday said that India believes in fair trade practices and equal treatment to all and that the country is not contemplating any curbs on imports from either Malaysia or Turkey.

Goyal was speaking at the Raisina Dialogue, a multilateral conference held here annually.

Replying to a question during a panel discussion at the event, he said that India has not put any curbs on imports from either Malaysia or Turkey — which have been critical of the Modi government’s decisions on Jammu and Kashmir — nor does it plans to do so.

He further said that if curbs are imposed, they apply equally to all countries.