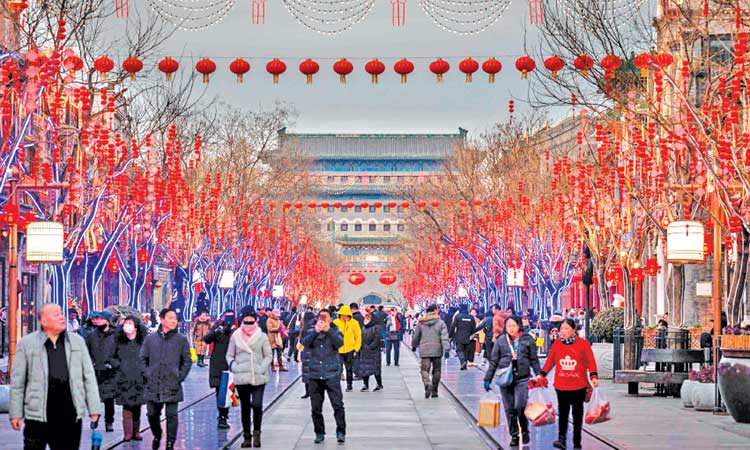 European indexes were broadly higher, while markets in Shanghai, Tokyo and Hong Kong closed with gains, after the US’s S&P 500 hit a new high the day before. Tech shares in particular did well, with Google parent Alphabet passing $1 trillion in market value, joining Amazon, Apple and Microsoft in the $1 trillion club.

China’s economic growth of 6.1% last year was the lowest since 1990 but forecasters pointed to improved activity in December. They said Wednesday’s signing of a truce in the war over Beijing’s technology ambitions and trade surplus might help to revive consumer and business confidence.

Investors are “finding inspiration” from the Wall Street rally while they try to figure out “where to from here” in US-Chinese trade relations, said Jingyi Pan of IG in a report.

“The market sentiment looks to have only improved into the end of the week,” said Pan.

Chinese economic growth held steady in the three months ending in December at the previous quarter’s rate of 6% over a year earlier.

If the public believes the truce is genuine, “improved sentiment could also boost economic growth in the near-term,” said Adams.

Benchmark US crude gained 18 cents to $58.70 per barrel in electronic trading on the New York Mercantile Exchange. The contract rose 71 cents to $58.52 on Thursday. Brent crude, used to price international oils, rose 21 cents to $64.83 per barrel in London. It rose 62 cents the previous session to $64.62.

The dollar edged up to 110.15 yen from Thursday’s 110.13 yen. The euro fell to $1.1106 from $1.1136. Copper prices climbed on Friday towards eight-month highs as expectations of stronger demand from top consumer China were boosted by stronger than expected economic data and optimism for a US-China trade agreement. Benchmark copper on the London Metal Exchange (LME) was up 0.6% at $6,312 a tonne by 1132 GMT.

Prices of the metal used as a gauge of economic health touched $6,343 on Thursday, its highest since May 1 and a gain of more than 10% since October. “Signs that the Chinese economy is stabilising were confirmed by pretty robust hard data,” said Commerzbank analyst Daniel Briesemann. “Hopes for a trade deal have helped drive up copper prices recently.” DATA: December’s industrial output in China rose 6.9% from a year earlier, the strongest growth in nine months and above an expected 5.9%, while retail sales climbed 8%. Fixed-asset investment rose 5.4% for the full year, but growth had plumbed record lows in the autumn. “The economy had lots of government support last year.

Can it do on its own this year?” said Argonaut Securities analyst Helen Lau, adding that there is increasing concern over bad debt. China’s economic growth slowed to its weakest in nearly 30 years in 2019 but was in line with expectations, though the economy ended the year on a firmer note as trade tensions eased. TRADE: China will boost purchases of US goods and services by $200 billion over two years in exchange for the rolling back of some tariffs under an initial trade deal signed by the world’s two largest economies, defusing an 18-month row that has hit global growth.

“There has been a muted response in commodities markets to the signing of the Phase 1 trade deal between the US and China, perhaps because the good news was already priced in,” Capital Economics said in a note.  Strong upside resistance comes in at $6,350, a Fibonacci retracement level. Support is at $6,210, where the 21-day moving average and trendline support currently sit.

The premium for cash zinc over the three-month contract - at about $20 a tonne - is the highest since late November and compares with a discount in mid-December. A premium has been restored because of worries about low stocks in LME-registered warehouses, close to 20-year lows around 50,000 tonnes, and one company holding large amounts of zinc warrants and cash contracts. Three-month zinc was down 0.1% at $2,419 a tonne.  Aluminium was little changed at $1,811, lead was down 1% at $1,982, tin gained 0.6% to $17,775 and nickel added 0.8% to $13,885.