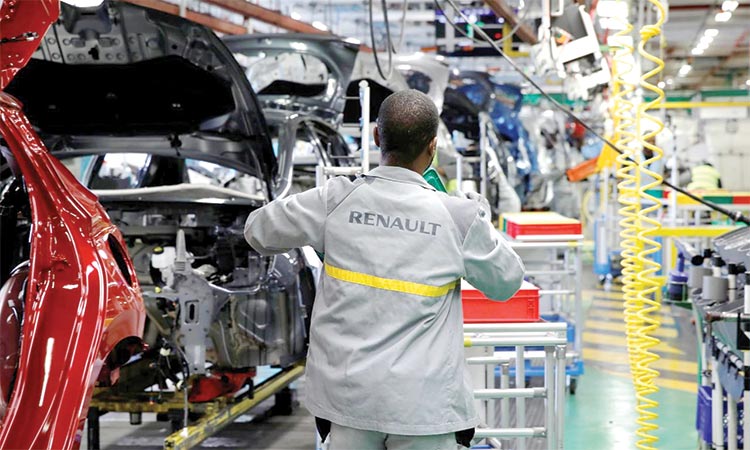 An employee at the Renault car factory in Flins, France. Reuters

Renault Chairman Jean-Dominique Senard said on Thursday there was a “real desire” at the helm of the carmaker’s alliance with Nissan to make it a success, dismissing suggestions the two decade partnership might be on the rocks.

The Franco-Japanese alliance, long dogged by internal rivalries, was thrown into turmoil by the November 2018 arrest in Tokyo of its architect and long-time boss Carlos Ghosn on charges of financial crimes, which he denies.

Attempts to restore calm have recently been thwarted by Ghosn’s dramatic flight from Japanese justice and a series of no-holds-barred allegations he has made from his refuge in Lebanon, including that he was the victim of a plot to oust him and that the alliance is now a “masquerade”.

Nissan has vigorously denied any suggestion of a plot, while both the Japanese firm and Renault have rubbished suggestions their 20-year-old partnership is falling apart.

“We have a board overseeing the alliance which is made up of people who are all extremely in favour of the alliance,” Senard told a briefing with reporters, defending the changes he has made since joining Renault after Ghosn’s arrest. “There is a common desire to associate our strategic plans and a real desire to make this alliance a success,” he added, describing reports that Nissan was working on scenarios for a possible future outside of the alliance as “fake news.” The 66-year-old repeatedly declined to comment on anything related to Ghosn, adding: “I only think about the future.”

Senard, who used to run tyre maker Michelin, has become the de facto senior figure in the alliance, though without the commander-in-chief aura Ghosn had, which had helped hold the partnership together.