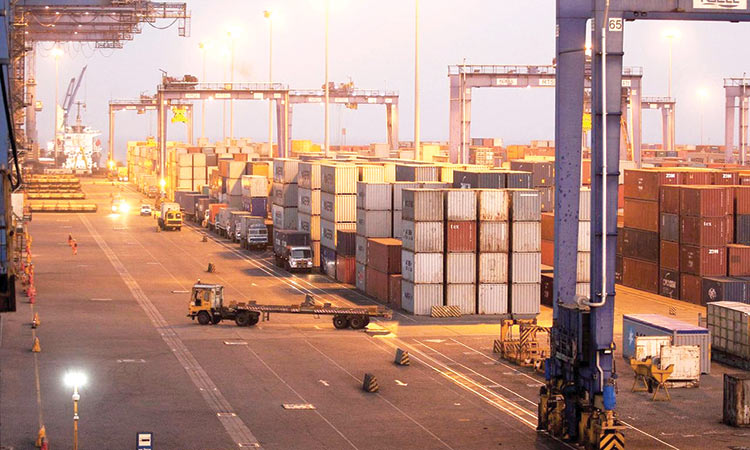 A general view of a container terminal is seen at Mundra Port in Gujarat, India. Reuters

India’s exports fell by 1.80 per cent in December on a year-on-year basis to $27.36 billion from $27.86 billion reported for the corresponding period of the previous year.

However, on a sequential basis, exports were higher than the $25.98 billion worth of merchandise that were shipped out in November.

“Non-petroleum and non-gems and jewellery exports in December 2019 were $21.05 billion, as compared to $21.16 billion in December 2018, exhibiting a negative growth of (-) 0.54 per cent,” the Ministry of Commerce and Industry said in a statement.

Similarly, imports declined during the month under review. They fell by 8.83 per cent to $38.61 billion in December from $42.35 billion reported for the corresponding month of 2018.

Consequently, the trade deficit in December narrowed to $11.25 billion as against the deficit of $14.49 billion in the corresponding period of 2018.

Commenting on the trade data, EEPC India’s Chairman Ravi Sehgal, in a statement, said: “exports continue to be in a dismal state, as global slowdown has started biting even more severely. Rising domestic inflation is bringing additional pressure and affecting our global competitive strength.”

“Exporters are now pinning hope on Budget for fiscal relief and ease of doing business.”

FIEO President Sharad Kumar Saraf said that global and domestic factors have again led to the decline in exports.

He cited protectionism coupled with factors including trade war, escalation of tension between Iran and the US and slowdown in economies across the globe have added to the woes of India’s exports sector.

Only 11 out of the 30 major product groups were in positive territory during December 2019, added Saraf.

According to ICRA Principal Economist Aditi Nayar, decline in the merchandise trade deficit in December 2019 relative to December 2018 was driven by the relatively broad-based contraction in imports, led by industrial inputs such as coal, chemicals, iron and steel, and non-ferrous metals, transport equipment, as well as consumer items such as precious and semi-precious stones.

“The rise in gold prices is expected to continue to constrain demand in the ongoing quarter, despite the favourable outlook for the rabi harvest, which would continue to curtail the size of the current account deficit.”

India’s merchandise exports shrank 1.8 per cent in December, falling for the fifth straight month, while the trade deficit narrowed to $11.25 billion from a year ago, helped by lower oil imports, the Trade Ministry said in a statement said on Wednesday.

Merchandise exports fell to $27.36 billion in December compared with a year earlier, while imports were down 8.83 per cent to $38.61 billion, the data showed.

Imports declined by 8.83 per cent $38.61 billion, bringing down the trade deficit to $11.25 billion during the month under review.

Meanwhile India’s retail inflation skyrockets to 7.35 per cent as food prices surge. Higher prices of food items along with those of primary articles accelerated India’s annual rate of inflation based on wholesale prices to 2.59 per cent in December from 0.58 per cent in November, official data showed on Tuesday.

The key macro economic inflation data comes a day after Consumer Price Index (CPI) for December showed an accelerating trend. It touched a 65-month high at 7.35 per cent from 5.54 per cent in November.