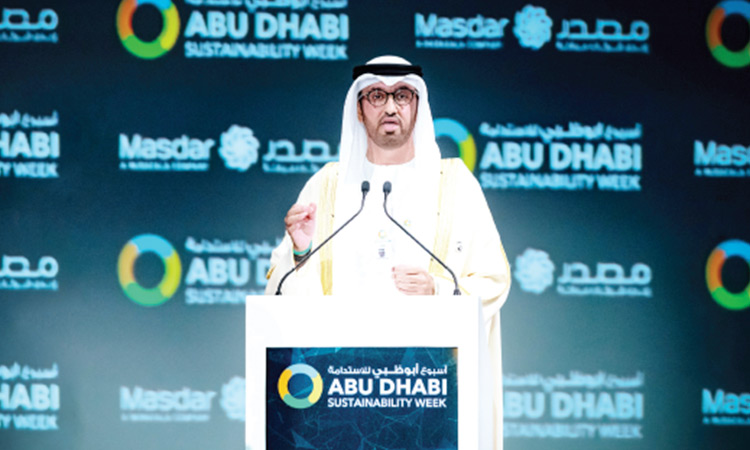 Dr Sultan Al Jaber speaks at the event in Abu Dhabi on Monday.

The Abu Dhabi National Oil Company, Adnoc, announced on Monday a set of comprehensive sustainability goals, extending its legacy of responsible oil and gas production and reinforcing its longstanding commitment to environmental stewardship.

The announcement was made by Dr Sultan Al Jaber, Minister of State and Adnoc Group CEO, while speaking at the opening ceremony of the Abu Dhabi Sustainability Week, ADSW.

As part of its sustainability goals, Adnoc plans to decrease its greenhouse gas, GHG, emissions intensity by 25 per cent by 2030, strengthening its position as one of the least carbon-intensive oil and gas companies in the world. According to the International Association of Oil & Gas Producers, Adnoc currently ranks in the top five lowest GHG emitters in the oil and gas industry and has one of the lowest methane intensities of 0.01 per cent.

Adnoc also commits to limit its freshwater consumption ratio to below 0.5 per cent of total water use. Today, over 99 per cent of the water Adnoc uses for cooling purposes is extracted seawater which is discharged back to sea after undergoing treatment to ensure compliance with Adnoc’s strict discharge standards.

In addition, Adnoc will continue to protect and support biodiversity across its operations and the broader local environment. As part of this commitment, Adnoc plans to plant 10 million mangrove seedlings in Al Dhafra Region in the emirate of Abu Dhabi by the end of 2022.

Mangroves have enormous capacity to absorb atmospheric carbon dioxide and other greenhouse gases, trapping them in flooded soils. Mangroves also support rich biodiversity and provide habitat for marine life, and act as a valuable natural defense against rising sea levels and coastal erosion.

Over the same period, Adnoc plans to achieve In-Country Value, ICV, of 50 per cent across its full value chain by 2030, building on the momentum of the success of its ICV programme launched in January 2018 to encourage private-sector partnerships, catalyze socio-economic development, improve knowledge-transfer and generate skilled jobs for UAE nationals.

Adnoc’s ICV programme is a key enabler of its commitment to drive progress and development in the UAE. To date, the programme has driven more than AED44 billion ($12 billion) back into the UAE economy and created over 1,500 private-sector jobs for UAE nationals since it was launched in January 2018.

Adnoc’s sustainability goals are underpinned by a commitment to be the global benchmark for safety and asset integrity.

Dr. Al Jaber said, “Adnoc’s sustainability goals further demonstrate our commitment to responsible production which has been embedded in our business practices since the company was established in 1971. This commitment flows from the vision of the Founding Father of the United Arab Emirates, (the late) Sheikh Zayed Bin Sultan Al Nahyan, who pioneered sustainability and the protection of the country’s natural ecosystems.

“We are taking a comprehensive and holistic approach to our sustainability strategy in terms of our contribution to the economy, the environment and our most important asset, our people. We are strengthening our environmental performance as we expand our operations to ensure we can deliver more energy with fewer emissions for decades to come.

“Crucially, we are reinforcing our role as the primary catalyst of the UAE’s socio-economic development through our In-Country Value goal, while maintaining a firm focus on the safety of our people and the integrity of our assets. Building on 50 years of responsible production, Adnoc will continue to work in partnership with key stakeholders to prioritise sustainability and we will continue to make significant investment in new and innovative technologies to improve environmental performance.” To enable Adnoc’s goal to reduce its GHG intensity by 25 per cent, Adnoc is building on the success of the region’s first commercial-scale carbon capture, utilisation and storage (CCUS) facility.

Currently, Al Reyadah facility has the capacity to capture 800,000 tonnes of CO2 annually. Adnoc plans to expand the capacity of this programme six-fold by capturing CO2 from its own gas plants, with the aim of reaching 5 million tonnes of CO2 every year by 2030 - the equivalent of the annual carbon capture capacity of over 5 million acres of forest or forest over twice the size of the UAE.

One of the key success factors of Adnoc’s high environmental performance is its longstanding zero intentional flaring policy, which has reduced the volume of natural gas flared by more than 90 per cent since the inception of the company.