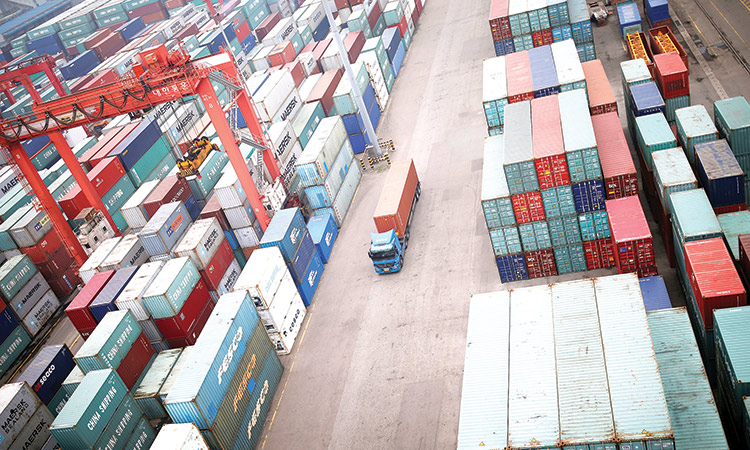 A truck drives between containers at a port in Incheon, South Korea. Reuters

South Korean exports fell in December year-on-year but less than expected, which along with a turn to growth in shipments to China and a slowing pace of decline in chip sales added to optimism for global trade. The trade between US and China badly hit the country, despite its efforts to overcome the global trade dispute.

Exports by Asia’s fourth largest economy shrank 5.2% in the final month of 2019 from a year earlier, trade ministry data showed on Wednesday, just beating a median 6.0% fall tipped in a Reuters poll.

It was the slowest decline in exports since a 2.1% drop in April 2019 and almost half the average rate of decline seen for the past six months as the global prices of memory chips, the country’s top export item, showed signs of picking up.

Analysts said Wednesday’s data supported their view that exports, the main engine of growth for South Korea’s economy, would turn to growth in early 2020 even though growth thereafter could stay low for a considerable period.

“Today’s data was positive in that recovery sustained and exports will return to growth from as soon as February, although the strength of recovery will really depend on how much China’s exports to the US increase,” said Park Sang-hyun, chief economist at Hi Investment & Securities.

The brightest spot in the December data was a turn to growth of 3.3% in exports to China, the first growth in 14 months. China is South Korea’s top export market and takes in a quarter of the smaller neighbour’s total shipments abroad.

Overseas sales of semiconductors, the country’s top-selling item, which accounts for one-fifth of its total exports, fell 17.7% year-on-year, but it was the slowest decline in eight months as global prices are stabilising after a plunge.

Imports dropped 0.7% in December from the year-earlier month, beating both a 13.0% loss in November and a 4.6% decline tipped in the Reuters survey. That brought the month’s trade balance to a $2.02 billion surplus versus a $3.34 billion profit in November.

South Korea, the world’s leading exporter of chips, smartphones, cars and ships, is the first major economy to report trade data each month, providing an early guide to the health of global trade.

For the whole of 2019, South Korea’s exports tumbled 10.3% as global trade cooled and a semiconductor super-cycle crashed, the worst in a decade and the third-worst in the country’s modern history.

The trade ministry said exports in 2020 would recover to post growth of around 3%, reflecting a still-shaky recovery in global trade as major economies remained in a slowing mode after years of unstopped expansion.

South Korea’s financial markets are closed on Wednesday for the New Year’s Day holiday and will resume trade on Thursday.

Meanwhile, Hyundai Motor plans to invest about 61.1 trillion won ($51.81 billion) between 2020 and 2025, the company said recently, with the expenditure mainly focused on electric and autonomous vehicles, but analysts want to see it deliver.

The South Korean car maker unveiled a “Strategy 2025” roadmap that envisages annual average spending of 10 trillion won, exceeding that of previous years, and up from a 2018 figure of 6.1 trillion won.

Shares in Hyundai rose as much as 2% on the news, only to give up most of their gains by the close of trade, with analysts waiting to see how its intentions translate into action.

“Its announcement of investment plan and goals is full of good words, but not real results yet,” said Lee Han-joon, an analyst at KTB Investment & Securities. “The plan itself also wasn’t an amazing one.”

South Korea’s top automaker is accelerating efforts to catch up in the race to bring self-driving cars to market.

Hyundai Motor is also looking at developing flying cars, which could be commercialised ahead of the most advanced self-driving cars, its executive vice chairman, Euisun Chung, has said.

Ensuring survival is a key task as the auto industry’s shift towards zero-emission and self-driving technology requires massive investment at a time of profit pressured by slowing growth, Hyundai said in a presentation to investors.

Hyundai aims to devote about 20 trillion won of the total investment, spread across six years, to future technologies.

It also set an ambitious deadline of 2025 to place itself among the world’s top three makers of battery and fuel cell vehicles, with annual sales of 670,000 electric vehicles, including 560,000 battery-based cars.