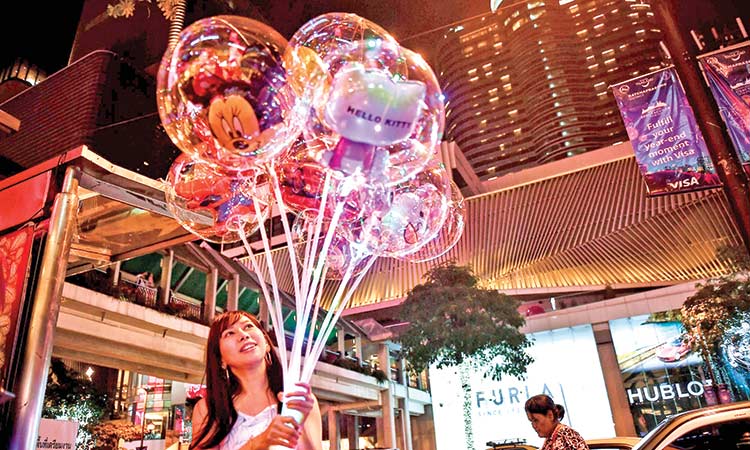 A woman takes photos with balloons in front of a shopping mall, in Bangkok on Monday. Agence France-Presse

The export-reliant country has been sharply hit by the Sino-US trade conflict. Exports fall 3.3 per cent in 2019 before rising just 0.5 per cent in 2020, according to the Bank of Thailand (BOT).

A strong Thai Baht, which has gained 8.3 per cent against the dollar in 2019 and is Asia’s top-performing currency, has added to the pressure on exports. Analysts say it could also hit tourism.

Thailand’s growth has lagged peers for years, and the central bank, after several downgrades, predicts it will be just 2.5 per cent this year, the weakest pace since 2014 when the army seized power in a coup, and forecasts it would be 2.8 per cent in 2020. Some analysts are even more pessimistic.

“We see growth of just 2.4 per cent this year and 2.5 per cent next year,” said Somprawin Manprasert, chief economist of Bank of Ayudhya. “The economy is still in a slowdown,” he said, adding that poor exports are now hurting domestic activity.

Charnon Boonnuch, an economist at Nomura in Singapore, said he only expected a sluggish economic recovery in 2020.

Thailand is a regional production and export base for global carmakers, but car shipments fell 6 per cent in the first 11 months of 2019, prompting some factories to cut work hours, said Surapong Paisitpattanapong, spokesman of the Federation of Thai Industries’ auto division.

“A profit from making one car is no more than 5 per cent, but our baht has gained 7 per cent-8 per cent. So the more they export, the more they suffer losses,” he said.

In a bid to fight currency strength, the BOT imposed various steps and cut its key rate twice in 2019 to a record low of 1.25 per cent, but the baht remains firm, driven by the large current account surplus.

The central bank has said that more measures are possible, adding that market intervention may be difficult as Thailand risks being added to a US watchlist of currency manipulators.

The government has been trying to lift growth by infusing more funds, including a $10 billion stimulus package, but with little impact. There was also a four-month delay in the 2020 budget to February due to a delay in cabinet formation, after an election in March voted former junta leader Prayuth Chan-ocha back to office as prime minister with a slim majority in parliament.

Political uncertainty is rising after thousands of people recently joined the biggest protest since Prayuth’s 2014 coup, following a move by authorities to ban a party that has rallied opposition to the government.

In January, a court will rule on the dissolution of the Future Forward Party, which could again spark protests.

“The economy should be better next year, albeit not much, if there is no fresh political chaos,” said Sanan Angubolkul, vice chairman of the Board of Trade of Thailand.

Visit Limluecha, vice chairman of the Thai National Shippers’ Council, said there are no positive signs for the economy yet. “I see no light at the end of the tunnel.”

Meanwhile Thailand’s rice export prices rose this week on concerns that a drought hitting the country may harm future supplies of the crop, while the festive season led to thin trade in India and Vietnam.

“There are concerns that the ongoing drought could hurt future supply so there is speculative buying and stockpiling by some mills and exporters, which has driven up the prices,” a Bangkok-based rice trader said.

The government introduced emergency measures last week in 11 provinces around the country, many of them rice-growing areas.

Thailand, the world’s second-largest rice exporter, will not have enough water to grow the crop in some 960,000 hectares of rice fields around the Chao Phraya River basin, authorities said in early November.

The dry season is expected to last through to April 30 next year.

“The market is just quiet during this Christmas and New Year holiday,” said a trader based in Ho Chi Minh City. “I think it won’t pick up until at least February, when supply of the winter-spring crop is available.” 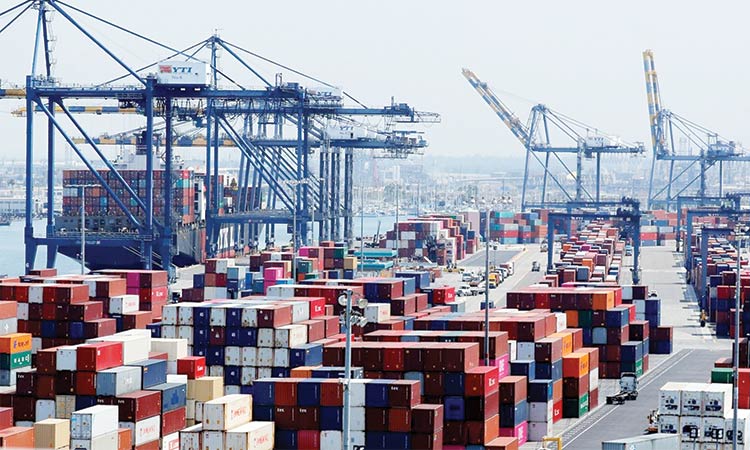