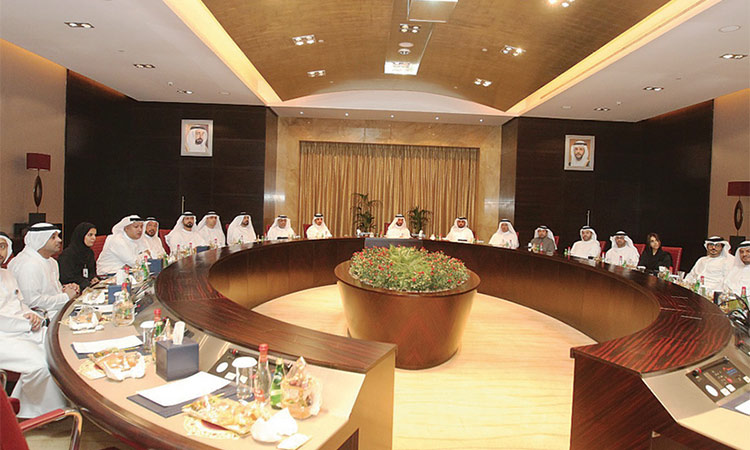 The 9th periodic meeting of the Board of Directors of Sharjah Chamber of Commerce & Industry in progress.

The Board of Directors of Sharjah Chamber of Commerce & Industry (SCCI) underlined that the Chamber is keen on developing its institutional performance by foreseeing the future in accordance with innovative mechanisms as part of the preparations for marking the UAE’s golden jubilee in 2020.

The participants also emphasised that the SCCI will maintain its reliance on the best international practices and innovative initiatives to reinforce the private sector’s leading and excellence and to boost the status of the business community in the emirate as a regional and global hub for establishing businesses.

The agenda of the meeting included a number of topics including; the project of the SCCI’s operational plan and the Sharjah Centre for International Commercial Arbitration for the year 2020, in addition to the most important activities, events, forums, conferences and exhibitions sponsored by the Chamber or participated in at the local and international levels.

This is in addition to discussing the draft of the estimated budget for the fiscal year 2020, endorsing the decisions and recommendations issued by the Board of Directors and the Executive Office at their eighth meeting, as well as reviewing some of the proposals put forward by the various sectors of the Chamber and the institutions operating under its umbrella.

While welcoming the attendees, Abdullah Sultan Al Owais lauded the huge efforts made by the wise leadership to maintain the UAE’s leadership and excellence in all fields, stressing that the year 2020 will be extraordinary for the SCCI by unifying efforts and capabilities to achieve its ultimate goal of enhancing Sharjah’s economic position to the highest possible levels.

Al Owais highlighted the excellence of the business community in the Emirate of Sharjah and its leading position as an international destination for establishing various businesses, thanks to the wise directives of His Highness Sheikh Dr. Sultan bin Muhammad Al Qasimi, Member of the UAE Supreme Council and Ruler of Sharjah, who provided unlimited support and holistic care for the SCCI enabling it to fulfil its mission and serve the business community and the private sector. Bolstering Foreign Trade Exchange

The board members also emphasized the importance of enhancing strategic partnerships with a broad network of partners abroad, with a view to bolstering the foreign trade exchange, attracting foreign investments, highlighting Sharjah’s competitive privileges, and focusing on the attraction of global conferences and exhibitions to reinforce the business community in the Emirate of Sharjah.

In turn, Mohammad Ahmed Amin Al Awadi gave a presentation on the SCCI’s achievements in the year 2019, including numerous programs and initiatives targeting the private sector, reviewing the essential role of the trade missions dispatched to various countries all over the world represented by the Sharjah Exports Development Authority, as well as the SCCI’s participation in the major international fairs to strengthen and expand the geographical area of the Sharjah’s exports.

On the other hand, the participants touched on the Expo Centre Sharjah’s plans in the coming stages, commending the global reputation of the Centre as one of the most important destinations for organizing and hosting major international events.

Additionally, the meeting included reviewing the SCCI’s internal system and authority matrix and discussing the approval of the functional evaluation, in addition to submitting a detailed report on key projects which the SCCI will work on achieving in the upcoming stage, such as facilitating the prosperity of Sharjah’s business sectors, enhancing their competitive capabilities, serving its affiliate members, and developing their network of commercial relationships and developing them on the international map.

The chamber’s board of directors supervises the execution of the general policy and is working on the means for the success of such policy and the reflection of the chamber’s role in the local community. There are also some specialised committees made out of the board of directors to assume many specialisations in the fields of trade, industries, professions and reconciliation.