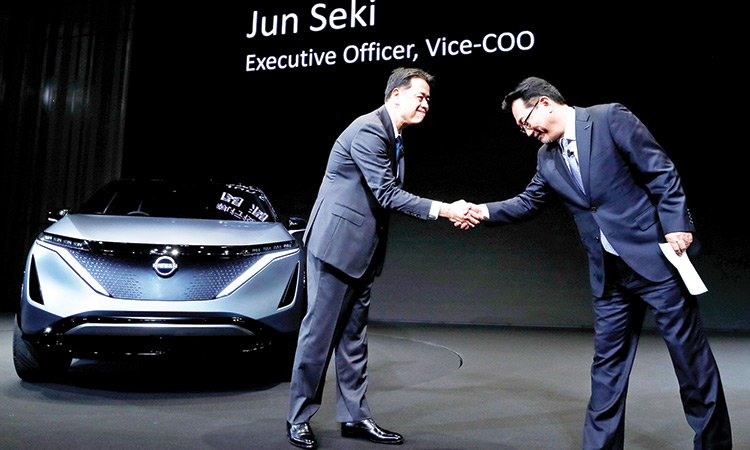 Makoto Uchida and Jun Seki during a news conference of Nissan in Yokohama. File/Reuters

Nissan Motor’s turnaround plan is on track and the company will generate major funds through cost savings. Seeking to roll back some of the costly expansion under ousted Chairman Carlos Ghosn, Nissan has embarked on wide-ranging turnaround plan.

The executive tasked with leading a recovery at Nissan Motor said he had decided to resign just weeks into his new job, a move that could disrupt the automaker’s push to turn the corner on scandal and slumping sales.

Jun Seki, Nissan’s vice chief operating officer and a former contender for chief executive, told Reuters he was leaving to become the president of Nidec Corporation, a Kyoto-based manufacturer of automotive components and precision motors.

Jun Seki will likely depart in January after three decades at Nissan, including a stint heading its China business.

“I love Nissan and I feel bad about leaving the turnaround work unfinished, but I am 58 years old, and this is an offer I could not refuse. It’s probably my last chance to lead a company too,” Seki said in a brief interview.

“It’s not about money. In fact, I will take a financial hit since Nissan pays us well,” Seki said. He declined to elaborate further. Nissan and Nidec declined to comment.

That plan, which began in April, is now on track to generate a cumulative few hundred billion yen in cost cuts and operational efficiency gains by the year to March 2022, according to two Nissan sources who spoke on condition of anonymity. One hundred billion yen is roughly equal to $915 million.

Adding to concerns about disruption among Nissan’s top management, the sources said that Seki, Chief Operating Officer Ashwani Gupta and Chief Executive Makoto Uchida have so far failed to gel as a team after being named to their posts in October. They officially took over on Dec.1.

“There was no instant, cohesive chemistry achieved by those appointments,” one of the sources said.

Gupta and Uchida were not immediately available for comment.

Seki’s resignation could further complicate Nissan’s relationship with top shareholder Renault. Seki recently worked in Paris for a year and was seen as relatively close to the French automaker.

Asked if he was leaving Nissan because he was passed over for the role of chief executive, Seki said that was not the case but did not elaborate. He and Uchida, most recently the head of the China business, had been seen as top contenders for the CEO job. Reuters reported in September that Uchida was seen as more favoured by Renault.

Before being named vice-COO, Seki was a senior vice-president charged with leading the turnaround.

Nissan has been profoundly shaken over the last year, first with the downfall of long-term leader Ghosn, who is now awaiting trial on allegations of financial misconduct that he has denied. Former Chief Executive Hiroto Saikawa then left in September.

One of the sources said Seki was contacted by a headhunter about a job at Nidec in April, after he returned from a year working in Paris.

Nidec’s 75-year-old chairman, the brash and confident Shigenobu Nagamori, has been searching for an eventual successor to lead and expand its business.

Nidec, which sees electric vehicles as a key driver of growth, has a 40% global market share in automotive electric steering motors and has said it wants to boost its share in electric vehicle propulsion motors.

After April, Seki had no additional contact with Nidec until the recruiter called him again on Oct. 8 when Nissan announced the new management team, including Uchida as CEO.

After that second call, Seki agreed to meet Nagamori - to turn down the offer, the source said.

“Nagamori talked Seki into accepting his offer in the end,” the source said.

Meanwhile, the boards of French carmaker PSA, the owner of Peugeot, and Fiat Chrysler (FCA) in separate meetings approved a binding agreement for a $50 billion merger, sources said.

The two mid-sized carmakers announced plans six weeks ago for a tie-up to create the world’s No. 4 carmaker and reshape the global industry. A merger is seen helping them deal with big challenges in the industry, including a global downturn in demand and the need to develop costly cleaner cars to meet looming anti-pollution rules. Both companies declined to comment.

China’s Dongfeng Motor Group, which now has a 12.2% equity stake in PSA, will have a reduced stake of around 4.5% in the merged group, two sources said, in a move that could help make regulatory approval easier.

According to the deal approved by PSA’s board recently, FCA’s robot unit, Comau, will remain within the combined group rather than be spun off as was originally planned in October, the sources said.

The new group will evaluate how to extract value from Comau.

Ahead of the meetings, entities representing the Peugeot family, Etablissements Peugeot Freres (EPF) and FFP, unanimously approved a proposed memorandum of understanding for the planned merger, a source familiar with the situation said.