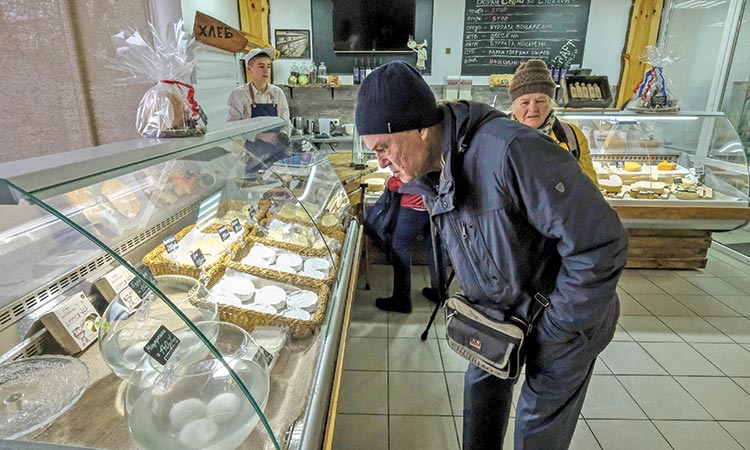 Customers at a bakery in Korolyov, Russia. Agence France-Presse

Friday’s rate cut was in line with market expectations and became the fifth in 2019. A Reuters poll this month predicted the central bank would trim the rate by 25 basis points, taking this year’s cumulative rate reduction to 150 basis points.

“We will consider the necessity of further key rate reductions in the first half of 2020,” said Elvira Nabiullina, the central bank governor, as she presented the rate move.

“We still see room for some reduction in the key rate, but in February, and at subsequent meetings, we will once again comprehensively assess the justification and timeliness of such a step, based on all the new data we will have by then.”

Unlike in the previous statement, when the central bank cut its key rate by 50 basis points, this time the bank dropped its wording that it would study the necessity of a rate cut at one of the next meetings.

“Our signal does not imply an inevitable rate cut in February, or in the first half of the year,” Nabiullina explained.

A further key rate cut will become possible only if our analysis confirms that this is needed to bring inflation back to the Bank of Russia’s 4% target, Nabiullina said.

The central bank, which targets inflation as the key indicator and is set to hold the next rate-setting meeting on Feb. 7, expects inflation to end this year at 2.9-3.2% and to bottom at below 3% in the first quarter of 2020.

“In the second half of the year, inflation will be returning to around 4%,” Nabiullina said.

Friday’s cut brought the key rate closer to the lower boundary of the 6% to 7% range that the central bank considers neutral from a monetary policy point of view and has no immediate plans to change.

“The CBR is clearly shifting to the “act-monitor-act” mode,” said Dmitry Polevoy, chief economist at the Russian Direct Investment Fund.

“We have no strong conviction at the moment on whether the CBR will be ready to go to sub-6% levels in key rate in 2020 as there are many unknown external/internal variables,” Polevoy said.

The rouble at first largely ignored the rate move but then pared gains ahead of the weekend, sliding to 62.68 versus the dollar from 62.15, its strongest level since mid-2018.

Russia has considerably reduced suspicious cash operations in the last nine months, preventing 886 billion roubles ($14 billion) from being taken into the shadow economy, the head of Russia’s financial monitoring agency said on Wednesday.

A money laundering scandal over suspicious payments totalling 200 billion euros ($220.4 billion), some of which came from Russia and flowed through a Danske Bank branch in Estonia, has triggered worldwide probes since the Danish bank admitted to the transactions last year.

Earlier in December, Reuters revealed the US Department of Justice has stepped up its investigation into Deutsche Bank’s role in the scandal. The German lender processed the bulk of Danske’s suspicious payments, sources have previously told Reuters.

Deutsche has already paid nearly $700 million in fines by New York and British regulators in a separate money laundering case involving $10 billion in so-called mirror trades from Russia, which the DoJ is still investigating.

Speaking in the Parliament, Chikhanchin did not directly mention Deutsche Bank or Danske Bank but said that via the ‘so-called Moldavian scheme, via a Latvian bank, Estonian scheme etc over 1 trillion roubles were taken out (of Russia) in 2007-2014.”

In general, he said, the withdrawal of funds from Russia abroad for suspicious operations remains a problem.

“As the monitoring data shows, these operations reached their peak in 2017,” he said. “As of today, transactions have fallen by almost half and the reduction in sums of money transferred has tripled.”