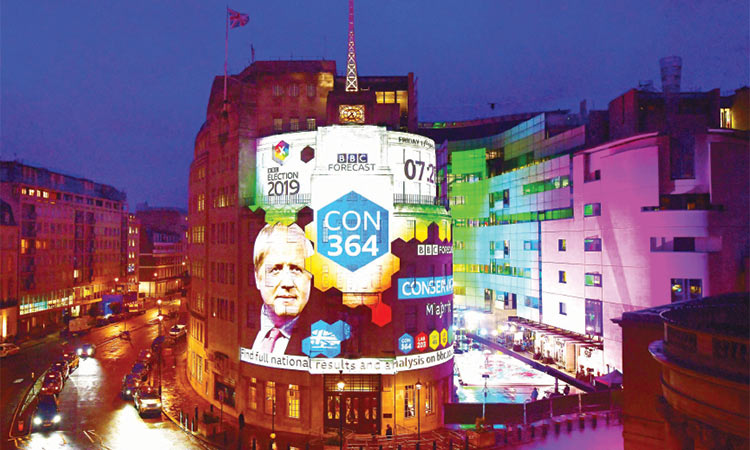 The election result is projected onto the Broadcasting House in London on Friday. Reuters

Other European stock markets − although lagging buoyant London, which rose over two per cent at one point − also powered ahead.

“Investors might have two early Christmas presents this week: a phase one trade deal between the US and China, and Brexit getting done,” said Jasper Lawler, head of research at trading firm London Capital Group.

Johnson, whose governing Conservative Party swept to a decisive win, will now push ahead with Britain’s scheduled exit from the European Union on January 31 as he seeks to dispel three years of uncertainty and political deadlock, with a post-Brexit, probably expansionary, budget planned in March.

“The UK general election has provided a clearer path towards a resolution to Brexit and looser fiscal policy, which should boost economic activity and push up sterling, UK equities, and Gilt yields,” said Hubert de Barochez, an economist with Capital Economics.

But he also warned that “as long as there remains the possibility of something like a ‘no deal’, those gains ought to be limited”.

European leaders welcomed also what appeared to be an end to Brexit paralysis, but also warned Britain against becoming “unfair competitor”.

The sheer scale of Thursday’s victory − the biggest Conservative majority since Margaret Thatcher’s heyday in the 1980s − sent the pound soaring to an 18-month dollar peak and to highs against the euro not seen since the June 2016 Brexit referendum.

“The threat to businesses from the Labour policies has been removed and there has been a collective sigh of relief,” said Maurice Pomery, founder of trading group Strategic Alpha.

The pound held at elevated levels on Friday but pulled back somewhat from the multi-month peaks forged overnight.

“After three years of (political) gridlock, the prime minister has a clear mandate to govern,” Carolyn Fairbairn, director general of the Confederation of British Industry (CBI), said in a statement.

“Businesses across the UK urge him to use it to rebuild confidence in our economy and break the cycle of uncertainty.” Fairbairn said “early reassurance on Brexit will be vital”, noting that “firms will continue to do all they can to prepare for Brexit, but will want to know they won’t face another ‘no deal’ cliff-edge next year”.

Britain is set to depart the EU by a deadline of January 31 thanks to Johnson’s decisive victory in Thursday’s general election.

But he still has to negotiate a new economic partnership with the bloc that remains Britain’s biggest trading partner.

Catherine McGuinness, policy chair at the City of London Corporation, a local government authority for the capital’s powerful financial district, pointed to “a long road ahead” on Brexit with Britain having to negotiate trade deals also with non-EU nations.

“For the City, it is vital that the future framework agreement recognises the enormous contribution of the services sector, securing maximum market access and developing a structure for the UK economy to prosper in the years ahead,” she added.

Johnson, whose general election campaign message was ‘Get Brexit done’, has promised to forge a Canada-style free trade agreement with the European Union, handing Britain greater freedom from EU rules but would involve more barriers and costs to trade.

“British companies... are eager for some clarity now,” Jonathan Geldart, director general of the Institute of Directors, said on Friday.

“For directors, ‘Get Brexit done’ will only have meaning once the details of our long-term future relationship with the EU are clear.” Geldart added: “The prime minister must resist the urge for arbitrary negotiating deadlines, and should commit to a proper adjustment period that starts when businesses know the full detail of what changes they may be facing.” - Skilled workforce - On the domestic front, business leaders on Friday urged the new government to be mindful of shaking up Britain’s immigration, noting the need for skilled workers to help grow Britain’s stalled economy.

“A critical first step is creating an effective and efficient visa system to meet demand for talented individuals. But the government also needs to look closer to home to supercharge our own skills agenda.” Concerns about mass immigration from the EU was one of the drivers of the Brexit referendum in 2016. 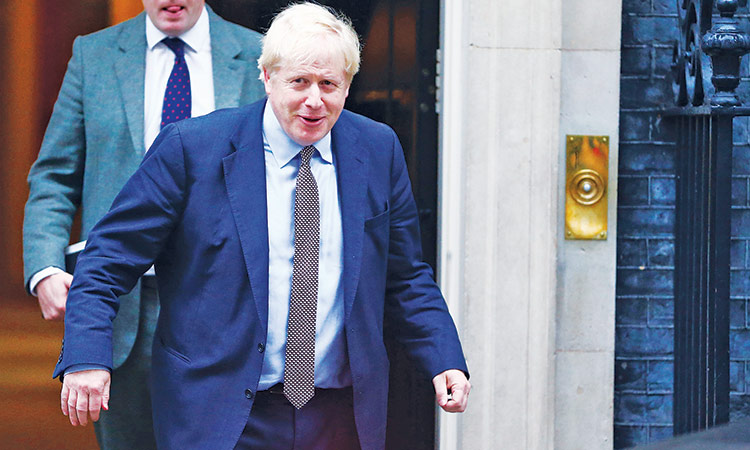 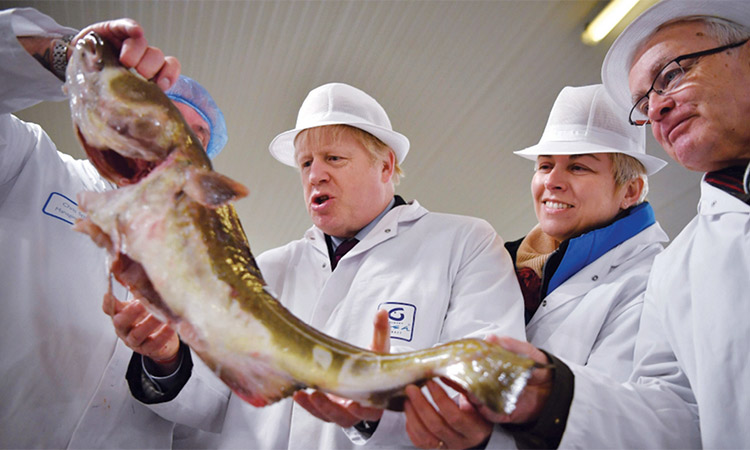