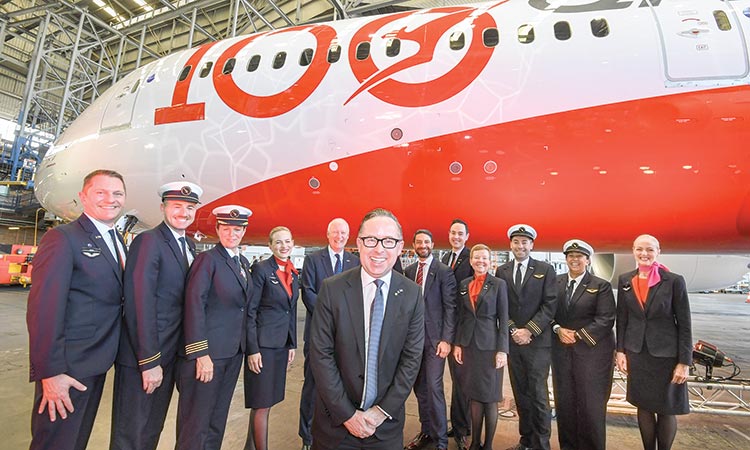 Alan Joyce with the crew of a plane, which made London-Sydney flight, in Sydney. File/Reuters

The choice of up to 12 A350-1000 planes fitted with an extra fuel tank for flights of up to 21 hours cements Airbus as the leader in ultra-long haul flying globally at a time when Boeing is battling delays on its rival 777X programme and a broader corporate crisis following two deadly 737 MAX crashes.

The Qantas flights would begin in the first half of 2023, but remain subject to the airline reaching a pay deal with pilots, who would need to extend their duty times to around 23 hours to account for potential delays and switch between flying the A350 and the airline’s current A330 fleet. A final decision on an order is expected in March, the airline said on Friday.

Qantas Chief Executive Alan Joyce said the airline “had a lot of confidence” in the market for non-stop services from Sydney to London and to New York based on two years of flying non-stop from Perth to London, where it has achieved a 30% fare premium over one-stop rivals in premium classes.

Alan Joyce posed with the crew of QF7879 flight, which flew direct from London to Sydney, during the Qantas Centenary Launch at Qantas Sydney Jet Base in Sydney, Australia, on November 15.

“The A350 is a fantastic aircraft and the deal on the table with Airbus gives us the best possible combination of commercial terms, fuel efficiency, operating cost and customer experience,” he said.

Airbus Chief Commercial Officer Christian Scherer thanked Qantas for its selection in a statement, while a Boeing spokesman said it was disappointed with the decision but looked forward to continuing its longstanding partnership with the airline.

Rico Merkert, a transport professor at the University of Sydney Business School, said the A350-1000 fit the Qantas brief well and was “a much safer bet”, given Boeing has recently reported problems such as the grounding of the 737 MAX, structural cracks in 737 NGs and a fuselage split in a stress test of its 777-9.

Airbus no longer provides list prices for aircraft, but based on its 2018 price list, the Qantas order could be worth up to $4.4 billion before heavy discounts that are standard for airline customers.

Citi estimated on Friday the planes would cost A$3 billion ($2.04 billion) to $3.5 billion, with the investment likely to be phased over three years.

Mark Sedgwick, president of the Australian and International Pilots Association, said the pilot union was looking for a win-win deal that benefited the company and pilots, but so far the negotiations had not struck that balance.

“We continue to discuss matters with Qantas,” he said.

The selection of the A350-1000 will add to growing doubts over Boeing’s plans to produce the 777-8 that it had proposed to Qantas for the mission.

Boeing had already said the entry into service for the plane, a smaller, longer-range version of the 777-9, would be delayed beyond 2022 but has declined to give a new date, saying it would be based on customer demand.

Meanwhile, Boeing on Thursday abandoned its goal of winning approval this month from the Federal Aviation Administration (FAA) to unground the 737 MAX after Chief Executive Dennis Muilenburg met with senior US aviation officials.

The announcement came after a congressional hearing on Wednesday in which numerous automakers prodded the FAA to take a tougher line with Boeing as it continues to review the plane that has been grounded since March after two fatal crashes.

FAA Administrator Steve Dickson said Wednesday he would not clear the plane to fly before 2020 and disclosed the agency has an ongoing investigation into 737 production issues in Renton, Washington. He added there are nearly a dozen milestones that must be completed before the MAX returns to service.

Muilenburg and Boeing’s commercial airplanes chief Stan Deal met with Dickson and “committed to addressing all of the FAA’s questions,” the company said, adding it will work to support the FAA’s “requirements and their timeline as we work to safely return the Max to service in 2020.”