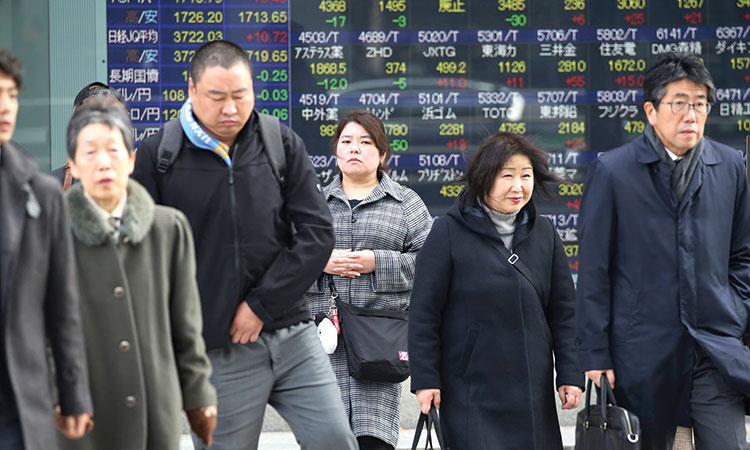 People walk by an electronic stock board of a securities firm in Tokyo on Monday. Associated Press

Japan’s economy expanded at a much faster pace than initially reported in the third quarter, as resilient domestic demand and business spending offset the hit to growth from falling exports and global trade tensions.

The firmer growth marked the fourth consecutive quarter of expansion and also beat economists’ median forecast for a 0.7 per cent gain. It was mostly driven by improvements in capital expenditure and private consumption.

However, analysts say the third quarter strength, which was the weakest growth seen this year, masks some fragility that could to lead to a much weaker performance going forward.

“The main reason for the upward revision was that non-residential investment jumped by 1.8 per cent on-quarter instead of the preliminary estimate of 0.9 per cent,” he wrote in a note.

Behind the big headline increase was strong investment from non-manufacturers, such as retailers, said Takeshi Minami, chief economist at Norinchukin Research Institute.

“In contrast to that, spending by manufacturers wasn’t so strong.”

The jump in capital spending outpaced the median forecast for a 1.7 per cent increase.

The annualised GDP growth translates into quarter-on-quarter expansion of 0.4 per cent from April-June, compared with a stronger 0.5 per cent gain in the second quarter and a preliminary reading of a 0.1 per cent increase.

The better-than-expected GDP revision comes after exports and factory output posted their largest declines in years in October, exposing widening cracks in an economy hurt by declining demand.

The Bank of Japan could offer a bleaker assessment on factory output than in October at its rate review this month, sources with direct knowledge of the matter said.

Private consumption, which accounts for some 60 per cent of gross domestic product, rose 0.5 per cent from the previous three months, slightly better than the preliminary reading for a 0.4 per cent gain, the data showed.

Some analysts are worried that the jump in business and household spending before October’s sales tax rise bodes ill for demand in the months ahead, threatening to leave the economy without a growth driver unless exports rebound.

A gloomy set of data, including worse-than-expected October household spending and retail sales figures, suggests the hit to consumption from the sales tax hike may be larger than previously thought.

Analysts already expect the economy to shrink in the current quarter due to the sales tax hike.

“The figures on consumption that were released on Friday were weak,” said Minami at Norinchukin Research Institute.

“The economy will likely not be able to avoid contraction in the fourth quarter.”

Japan’s cabinet approved a $122 billion fiscal package last week to support stalling growth amid the outlook risks and as policymakers look to sustain economic activity beyond the 2020 Tokyo Olympics.

Meanwhile the Japanese households cut their spending for the first time in almost a year in October as a sales tax hike prompted consumers to rein in expenses and natural disasters disrupted business.

Household spending dropped 5.1 per cent in October from a year earlier, government data showed on Friday, down for the first time in 11 months and the biggest fall since March 2016 when spending fell 5.3 per cent and weaker than the median forecast for a 3.0 per cent decline.

That marked a sharp reversal from the 9.5 per cent jump in September, the fastest growth on record as consumers rushed to buy goods before the Oct. 1 sales tax hike from 8 per cent to 10 per cent. “Not only is the sales tax hike hurting consumer spending but impacts from the typhoon also accelerated the decline in the spending,” said Taro Saito, executive research fellow at NLI Research Institute.

“We expect the economy overall and consumer spending will contract in the current quarter and then moderately pick up January-March but such recovery won’t be strong enough.”

Household spending fell 4.6 per cent in April 2014 when Japan last raised the sales tax to 8 per cent from 5 per cent. It took more than a year for the sector to return to growth.

Compared with the previous month, household spending fell 11.5 per cent in October, the fastest drop since April 2014, a faster decline than the median 9.8 per cent forecast.

Analysts said a powerful typhoon in October, which lashed wide swathes of Japan with heavy rain, also played a factor in the downbeat data. Some shops and restaurants closed during the storm and consumers stayed home.