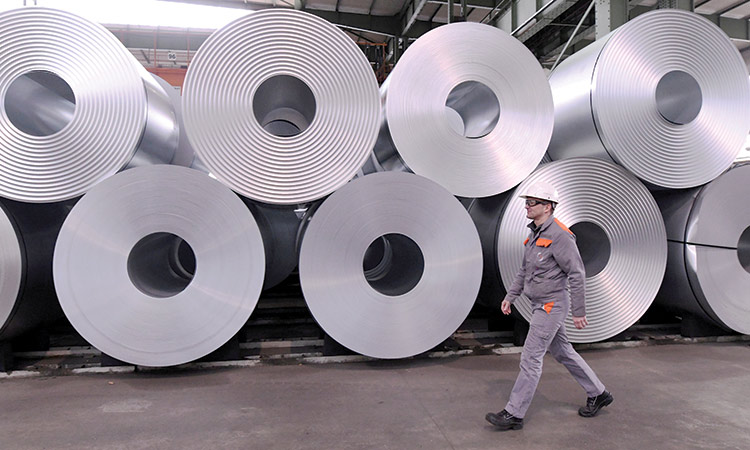 Steel rolls at a factory in Salzgitter, Germany. Reuters

Germany’s industrial output unexpectedly dropped in October, reviving worries about its economic growth outlook as its manufacturing backbone takes a blow from global trade conflicts and disruptions especially in the automobile sector.

Industrial output dropped 1.7% on the month against expectations for a 0.1% rise, Statistics Office report showed. Production of capital goods slumped by 4.4% on the month, the steepest decline in more than five years.

Europe’s biggest economy is going through a soft patch as its export-oriented manufacturers struggle against a backdrop of trade friction, an ailing car industry and uncertainties over Britain’s planned departure from the European Union.

German industry now expects output in the coming months to fall more slowly than was foreseen a month ago, a survey of 2,300 firms in the sector by the Ifo economic institute showed on Friday.

In its 10th successive year of growth, Germany’s economy has been relying on strong consumption as exports weaken, which resulted in a second-quarter GDP contraction of 0.2%. The economy grew by just 0.1% in the third quarter, narrowly avoiding recession, which economists usually define as two consecutive quarters of negative growth.

“Trade conflicts, global uncertainty and disruption in the automotive industry have put the entire German industry in a headlock, from which it is hard to escape,” said Carsten Brzeski, economist at ING.

The automobile association VDA said on Wednesday that it expected global car sales to fall by 5% this year and that the crisis would force German companies to cut more jobs in 2020.

Many economists have been urging the government to ditch its policy of incurring no new net debt, saying it should instead borrow to finance a stimulus package.

Conservative Chancellor Angela Merkel’s right-left coalition government has rejected calls from industry groups and economists for a stimulus package to put the economy firmly back on a growth trajectory.

However, the new leftist leadership at the helm of the Social Democrats, Merkel’s junior coalition partner, wants more investment in schools, infrastructure and digitalisation.

The coalition parties must now decide how far they will compromise to preserve their governing alliance until a 2021 election.

“The economic weakness in industry remains” the ministry said in a statement. “However, the latest developments in new orders and business expectations indicate that a stabilising trend could emerge in the coming months.”

German industrial orders fell unexpectedly in October as demand at home and from outside the euro zone weakened, suggesting a manufacturing downturn will continue to hold back growth in Europe’s largest economy in the final quarter.

Contracts for German-made goods were down 0.4% from the previous month, the Statistics Office said. That undershot a Reuters consensus forecast for a 0.3% rise.

“The German industry is still stuck in the vale of tears,” VP Bank economist Thomas Gitzel said, adding that a growing number of companies were applying for state aid to keep well-trained staff but put them on short-time work. The reading for September was revised up to an increase of 1.5% from a previously reported 1.3%.

Industrial orders from domestic clients fell 3.2% while demand from customers outside the euro zone dropped 4.1%, the data showed. Orders from other euro zone countries jumped 11.1%, helped by bulk orders.

Demand was particularly weak for capital goods such as machines and equipment, whereas orders for consumer and intermediate goods edged up, the data showed.

The German economy skirted a recession in the third quarter as consumers, exports and state spending drove a 0.1% expansion from July through September, following a 0.2% contraction in the previous three months.