India’s forex reserves rise to over $448.24b; Sensex down - GulfToday

India’s forex reserves rise to over $448.24b; Sensex down 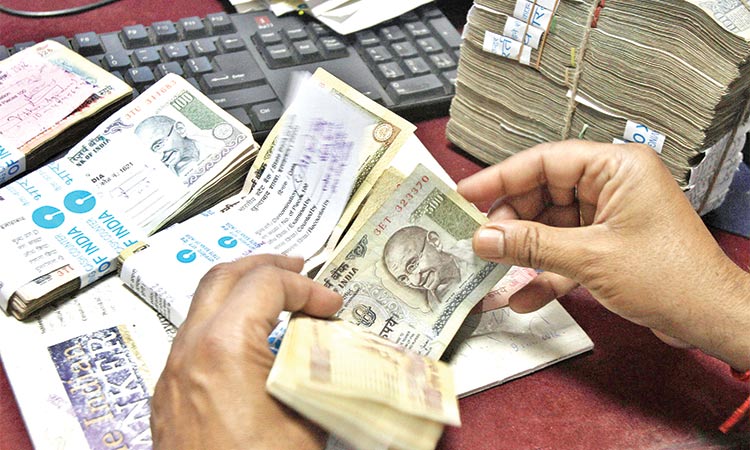 On a weekly basis, FCAs − the largest component of the forex reserves − edged higher by $643 million at $416.47 billion.

However, the RBI’s weekly data showed that the value of the country’s gold reserves went down by $200 million to $26.70 billion.

Similarly, the SDR value inched down by $5 million to $1.43 billion, whereas, the country’s reserve position with the IMF rose by $3 million to $3.63 billion.

Separately, profit bookings in key counters such as banking along with subdued foreign fund inflows and a weak rupee pulled the key indices of the Indian equity markets lower on Friday.

Consequently, both S&P BSE Sensex and NSE Nifty50 slid during the day’s trade.

Sector-wise, heavy selling pressure was observed in IT, banking and capital goods stocks, whereas the scrip of metal and automobile companies saw healthy pick-up.

However, broader market indices like the BSE mid-cap and small-cap outperformed both the Sensex and Nifty.

“It was the second consecutive session of losses for the Nifty,” he added.

According to Joseph K. Thomas, Head of Research, Emkay Wealth Management: “The weakness in banking and IT stocks was the major contributing factor behind dragging the markets down in today’s trading session.

“The support received from the recent run-up in key telecom counters was also missing today. On the technical front, the level of 12,000 is seen as a key resistance by many market participants, which adds up to the selling pressure. We believe post the short duration of profit booking, markets should reverse on a much more stronger footing.”

Meanwhile, gold demand remained subdued in China this week against a backdrop of slowing economic growth, and in Hong Kong where protests continued, while prices in India flipped into discount as demand eased.

In Hong Kong, gold premiums remained unchanged at 30 cents to 50 cents an ounce range over benchmark prices, as people awaited district council elections on Sunday after months of unrest by pro-democracy protesters, which caused gold demand to weaken in the region.

“Retail (demand) has seen a slowdown because of the protests going on in Hong Kong. The economy is also hurt by the US-China trade war, weighing on demand,” said Dick Poon, general manager at Heraeus Precious Metals in Hong Kong. A fresh dispute between China and the United States over Hong Kong this week, as the U.S. Congress passed legislation to back protesters in Hong Kong and threaten China with possible sanctions on human rights, further raised fears that the 18-month long trade war could not be settled this year.

“Demand is generally higher this time of the year (in Hong Kong), but this year it is quieter mostly because of the political situation there,” said Peter Fung, head of dealing at Wing Fung Precious Metals.

“Premiums are under pressure, demand is low. People don’t have money to buy gold as the economic condition is not good,” Fung added.

Gold demand was lacklustre in India as well, with dealers offering a discount of up to $3 an ounce over official domestic prices this week, compared to a premium of $1.5 an ounce last week.